Landscaping for the “Heart of the Capital” Residential Complex 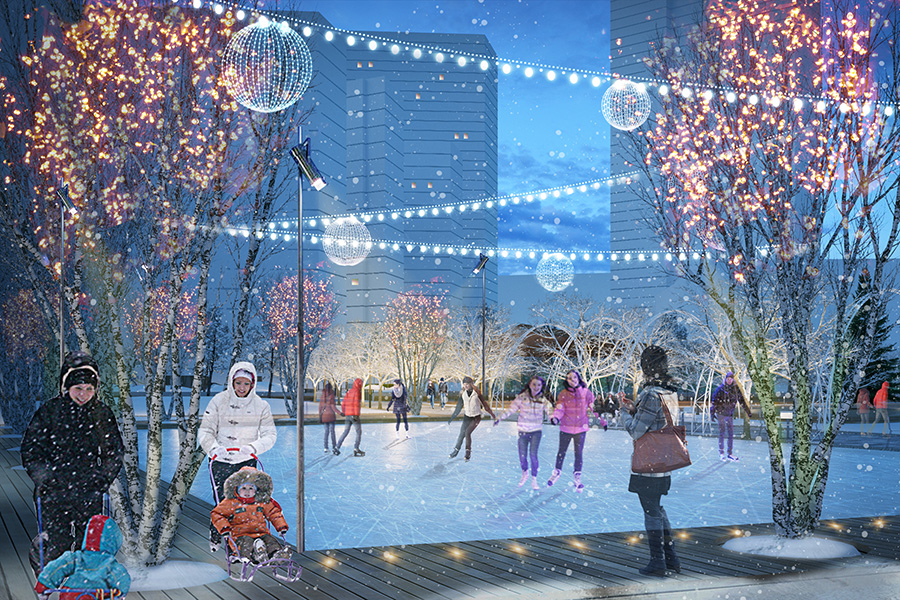 Interior courtyards are by their very nature private spaces intended for residents only. But this does not mean that the overall plan for their use does not have to be as thoroughly thought out as that for any park or other public space. The “Heart of the Capital” residential complex courtyards represent an attempt to create highly localized common spaces, spaces which in terms of quality are in no way inferior to those throughout the city.

due to its location in the “Big City” area – an urban environment not oversaturated with cultural infrastructure or holistic landscaping – the residential complex needs courtyards and spaces to make up for its remoteness from the downtown area with all its related benefits.

instead of isolated courtyards with a banal collection of smaller architectural shapes, playgrounds, and shrubbery, the design for this contemporary residential complex calls for a holistic solution for spaces, one with a well thought out structure, variable accessibility, and a multi-faceted approach.

The «Heart of the City” residential complex is situated on the Shelepikhinskaya embankment of the Moscow river and consists of 9 residential buildings and one office building, and includes a school and kindergarten located in the center of the block. It is surrounded by a less than pleasant urban environment – industrial zones, a major transportation artery, and a railroad. The block is very much an island, which gives rise to a desire to create the most comfortable living conditions possible for its residents. As is usually the case in such a situation, developers, having created the most comfortable area within the complex in an attempt to protect residents, isolate them from these surroundings by closing off the residential complex space. But separated by this practice from the rest of the world by fences, gates, and private security, residents only distance themselves further from the external world, and withdraw within their strictly private zone – their own apartments – to the extent that even their own yards cease to be of interest to them. The architectural bureau has radically proposed a different approach – opening the block to its surroundings, and structuring its territory by taking into account several orders of privacy and various formats for social interaction. Together with the KB23 Company, research was done to help define a set of user scenarios from which followed yet other solutions – for overall layout as well as infrastructure.

Internal organization of the block is based on the results of modeling the most popular pedestrian paths and various scenarios for using planned and existing neighboring infrastructure elements. The result was the development of a network of pedestrian connections between residential buildings and places used every day (the supermarket, sport facility, the slope heading town to the embankment) as well as transportation hubs. Sociological and urban development research data have shown the ineffectiveness of initially locating various public and commercial facilities on the ground floor of residential complexes. Based on analysis of planned pedestrian flows, a new blueprint has been developed for the placement of shops and everyday service establishments, one which will in turn increase the profitability of such commercial real estate while providing more convenience for residents. 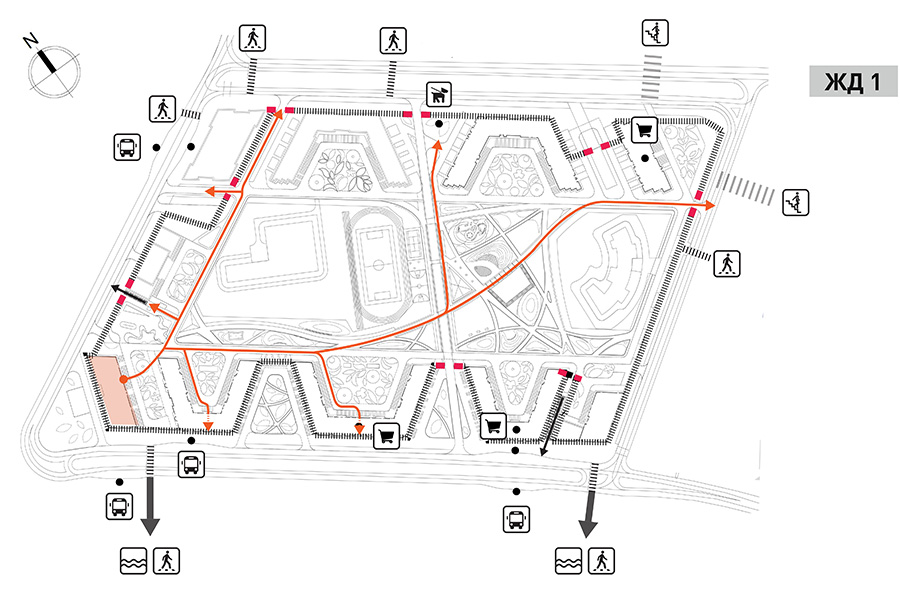 Public spaces have been divided into three types varying in terms of the balance between privacy and open public access: “me and my neighbors” – internal courtyards for each residential building bounded by the perimeter of each building and opening into the interior of the block, “me and my world” – the large public area between the residential buildings, a great courtyard in the interior of the block, and “me and the outside world” – open spaces which while extending beyond the perimeter of the block are still located on the overall territory of the development. For the most private type of space – “me and my neighbors” – courtyards of the multi-unit residential buildings serve as a milieu for the “microsocium” (the residents of each separate building) providing them the opportunity for day-to-day leisure activities and interaction – be that in terms of places for playing desktop games, spaces with outdoor furniture, or children’s playgrounds. Meanwhile, while from above the courtyard looks like a decorative pattern, at eye level, its component pieces turn out to be various infrastructure and functional facilities, landscaping elements and smaller architectural forms. For the “me and my world” type of space, the entire interior territory is divided into a “loud” zone for larger-scale leisure activities and a quiet park area separated by the main alley. This pronounced divide is dictated by the fact that a below ground level drive for fire department access passes exactly through the middle of this area. The resulting transportation corridor has been turned into a landscaping element – a unique trench traversed by elegant bridges and crossings. 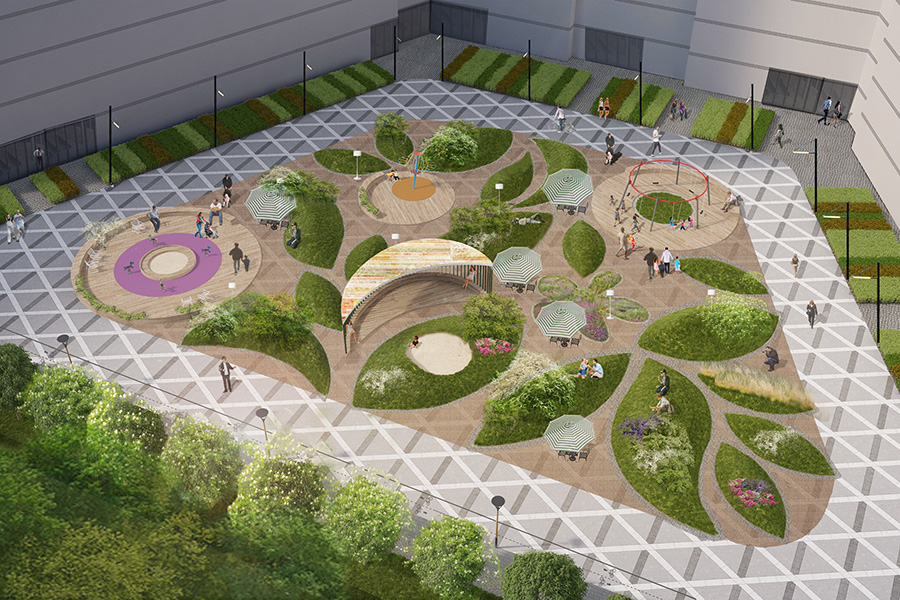 With this, a large part of the internal courtyard space is occupied by space set aside for the school and kindergarten, which by regulation have to be fenced in. Landscaping for their space and the interconnection with the rest of the courtyard area will be addressed by supplemental development. 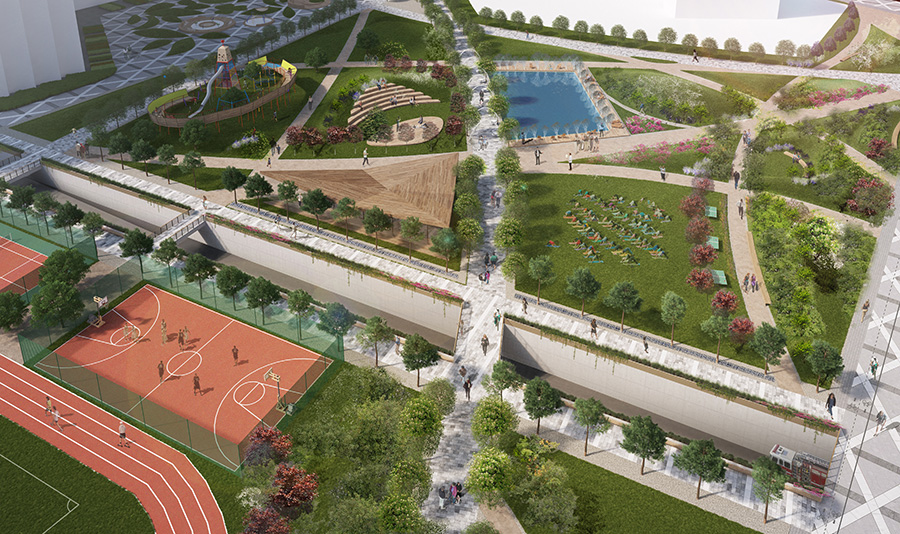 Yet another large part of the internal courtyard space is entirely set aside for pedestrians: all parking spaces are tucked away in the common foundation the residential complex is built on, while barrier free surface areas create a hospitable, entirely accessible environment. 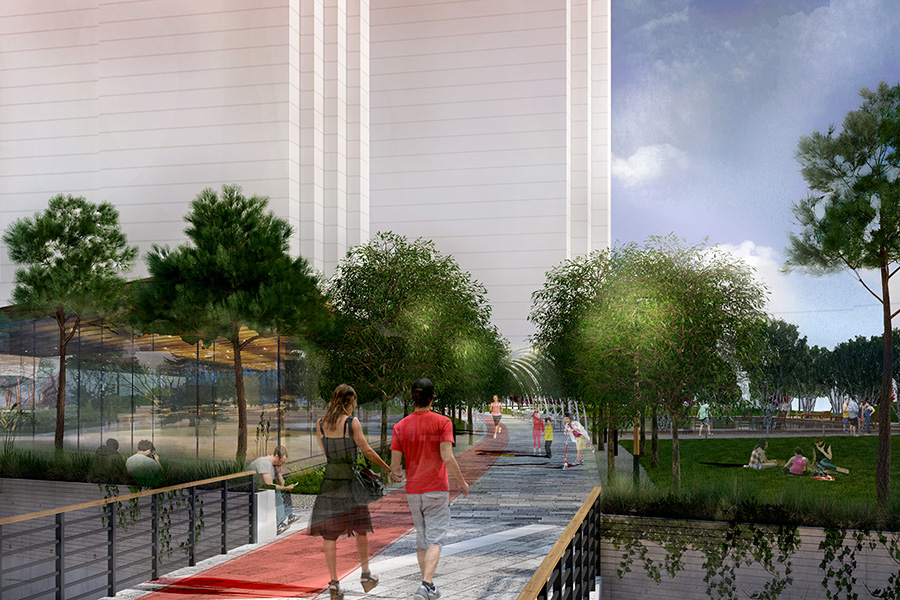 Common sports facilities form a unified theme in conjunction with the secondary school’s sports nucleus: its full-sized stadium has been supplemented by multi-purpose facilities for basketball, volleyball, tennis and running, and there is a kilometer-long path for jogging, bicycling and roller skating. 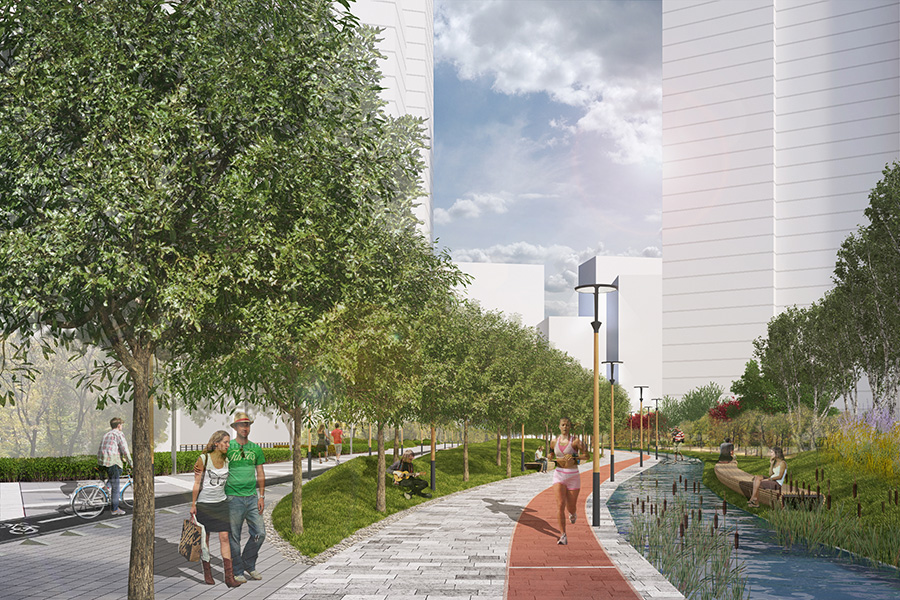 The “me and the outside world” area includes public spaces accessible to all city dwellers. Isolated pockets in the overall development will be used to create places for socializing and relaxation: for example, café terraces and artificial hills with benches and decks. These areas are tasked with creating zones for comfortable, varied interaction with non-residents while simultaneously conveying to guests the overall atmosphere of the block, the quality and comfort of the settings established in the “Heart of the Capital” residential complex. 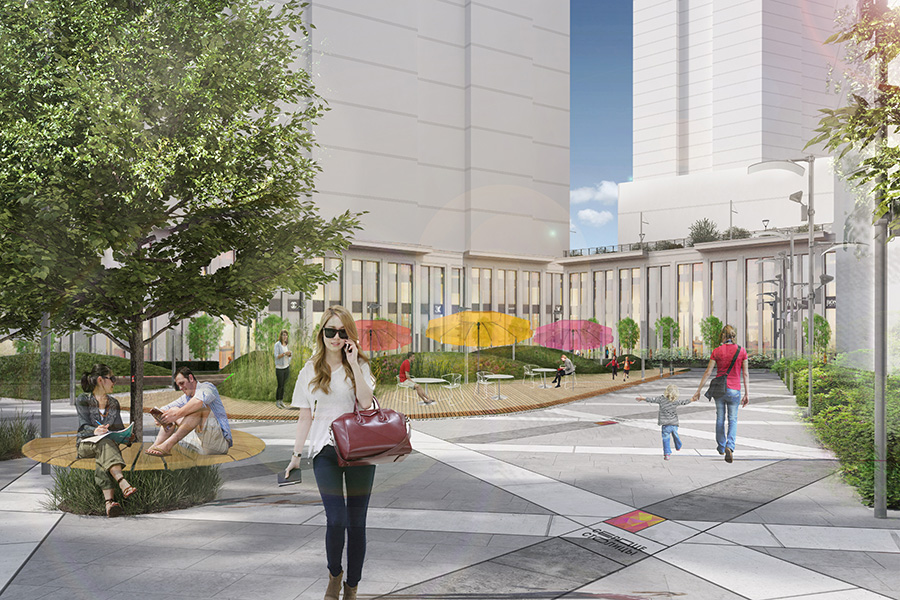 For each of the three zones, the plan contemplates unique lighting determined by the needs of users. Areas around the residence units themselves will be equipped with low landscape lighting fixtures as well as decorative accent lighting. For interior courtyard areas, basic lighting will be provided by means of accent lighting for trees, alleys, and various venues. Proposed for all areas are specially designed landscaping elements (latticework around downspouts, paving, grating around tree trunks, and pathfinding aids). There are also plans for using public art works. 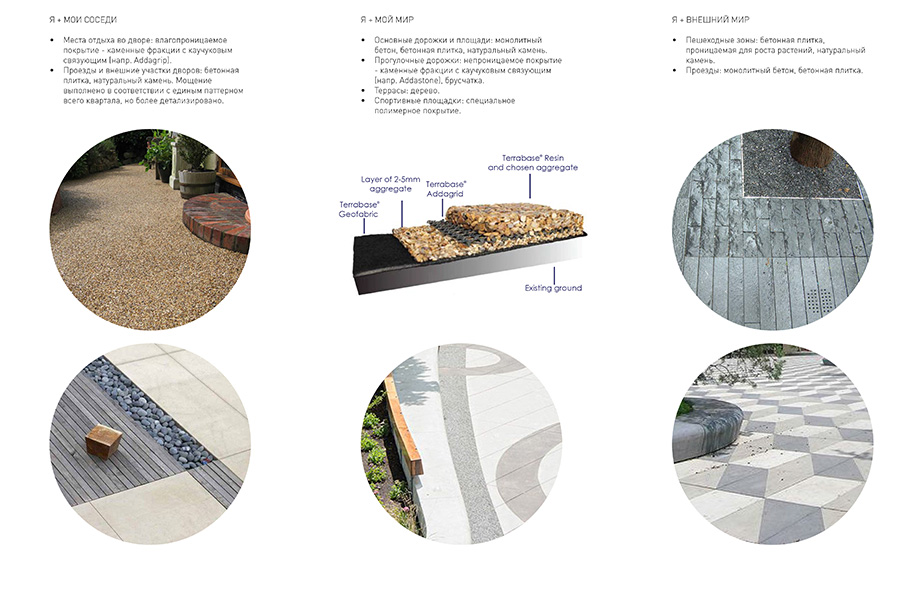 Beyond courtyards and public spaces of the residential complex, the project framework will also include reconstruction of the Moscow river embankment. Where previously there was an undeveloped shoreline area with abandoned industrial structures, there will now appear a system of pedestrian promenades connecting the residential complex being built not only with other neighborhoods, but, leveraging river transportation, with the downtown area. The shoreline area will accommodate recreational, sporting and service facilities integrated into the overall enhanced landscape, which will include beaches, a dock, an amphitheater, a climbing wall, and a skating park.