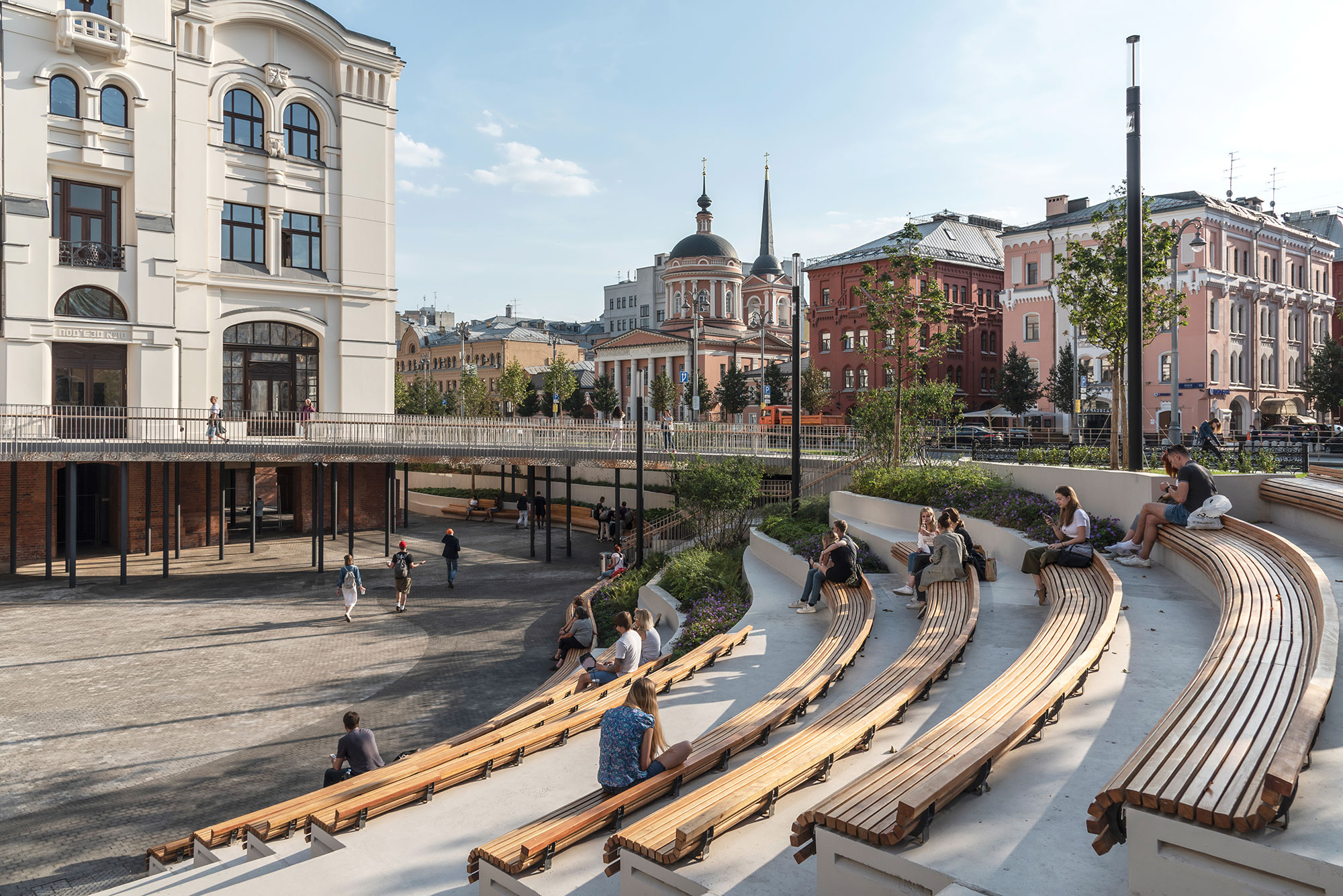 In the contemporary city, the museum long since ceased to be simply a place for storing exhibits, school trips and the “cultural leisure” of adults on their days off. It should be a full-fledged participant in urban life, able to compete on equal terms with parks, cinemas and restaurants. Museum Park (‘Muzeiny Park’) is a pedestrian zone and public space that helps draw city dwellers into the Polytechnic Museum.

Following the concept by Junya Ishigami the territory around the Polytechnic Museum was to be transformed into a Museum Park – a thoroughly designed public space, whose structure takes into account the needs of the Museum and its visitors, as well as intensive transport and pedestrian flows, and the requirements of the city authorities concerning streets and town squares

A park-amphitheatre in front of the Museum - an open-air foyer that will become an extension of the spaces inside the building and will act as a prologue, while the inner space is under construction. It will be able to host events while uniting the new pedestrian zone in the building’s lower ground level with the outdoor area alongside Lubyanka Square, attracting pedestrians and providing them with a convenient and pleasant route into the Museum complex.

In 2011, the Polytechnic Museum Development Fund held an international competition for the concept for the reconstruction of the historical premises on Novaya Square. The Jury selected the impressive and bold proposal of the Japanese architect and artist Junya Ishigami. His fundamental idea was to activate the semi-basement level of the Museum by inclining the ground level around the building, landscaping the slopes which created internal courtyard spaces with trees. As a result, a park would be formed both within and around the Museum, increasing the total area to 14 000 m². However, this proposal had to be linked with the urban planning and transport conditions around the building, making it compatible with the underground utility system as well as the general programme for the reconstruction of public spaces in the city centre. 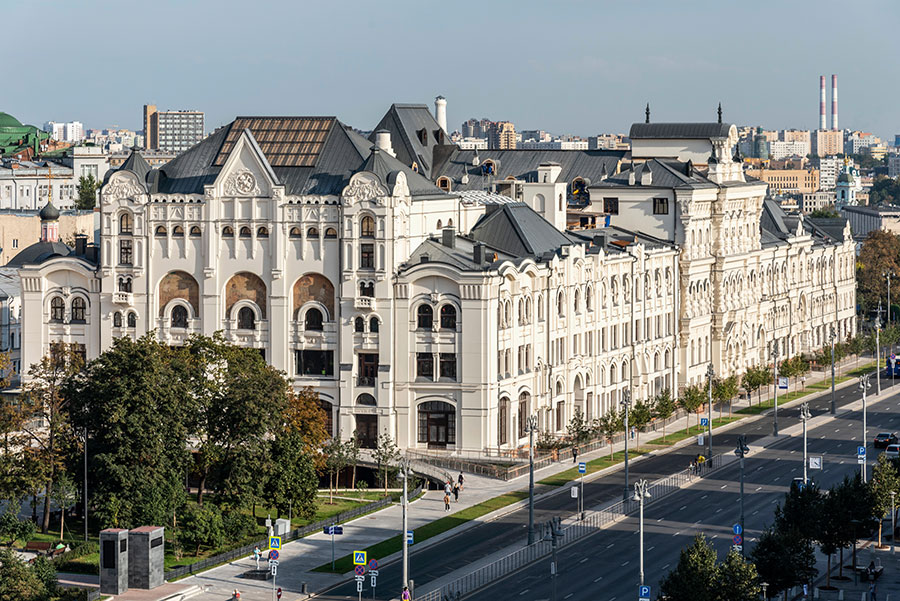 Comprehensive research was carried out on behalf of the Polytechnic Museum of the territory around the building, its transport situation and main directions of pedestrian flow. The proposed development of Ishigami’s concept linked the Metro exits, Museum building entrances, routes followed by both Polytechnic Museum visitors and regular pedestrians, transport flows, and the logistical requirements of the Museum. A public space and communications hub was created as a result with access to the Museum, neighbouring garden squares from which pedestrians could visit adjoining cafés and galleries. The square and garden area beside the Metro exits became the key element of the scheme, which unites the Museum’s lower ground level with the city. 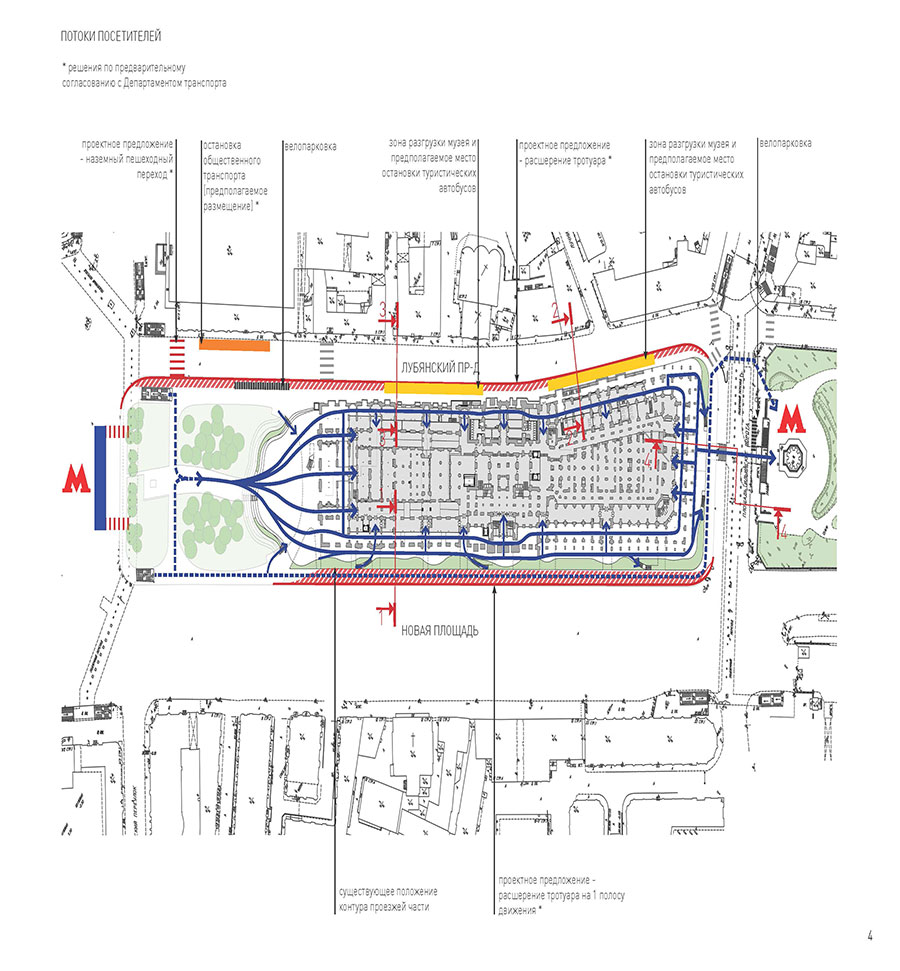 The layout of adjacent streets and the road traffic management scheme then had to be reassessed together with specialists from the Moscow City Department of Transport. Painstaking calculations on the various possible scenarios indicated that Lubyansky lane could be reconstructed, closing Polytekhnichesky transit to traffic and considerably narrowing the roadway alongside Novaya Square. 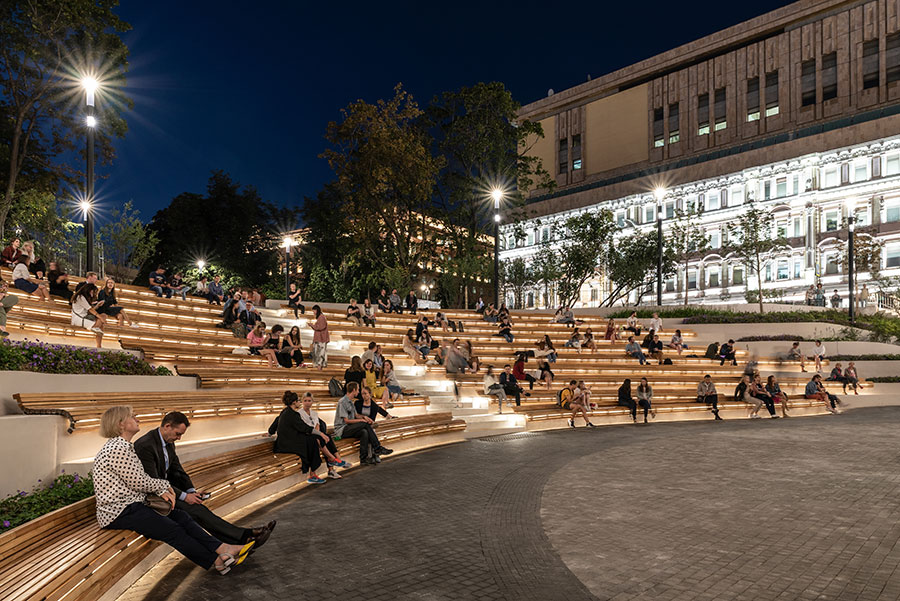 As a result, a square was created in front of the Museum at the level of the lower ground floor. This square became accessible from the underpass through the garden square. 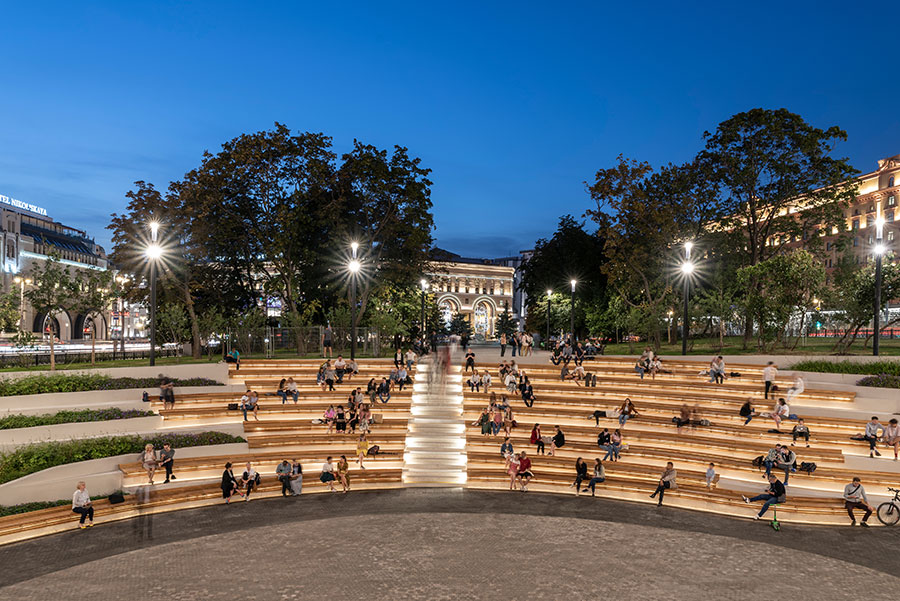 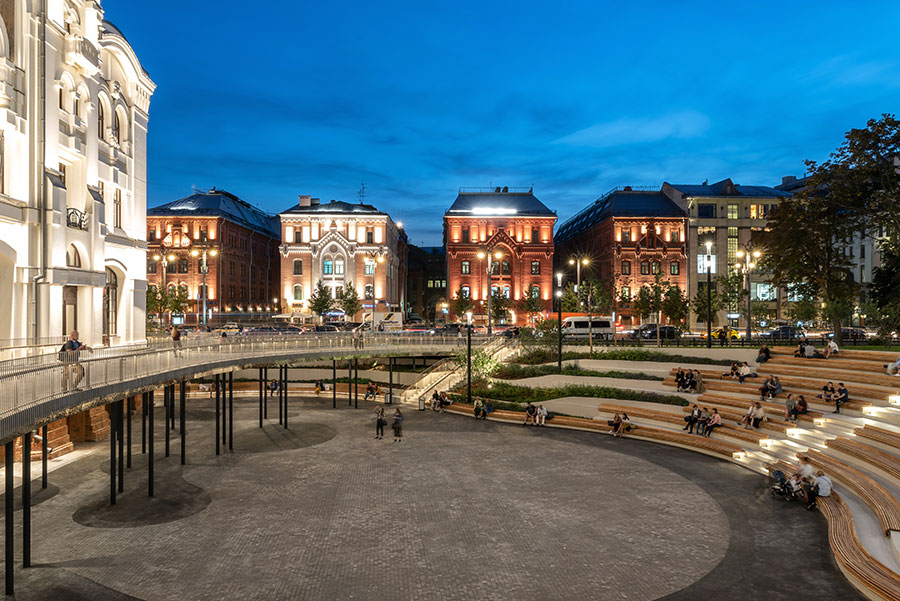 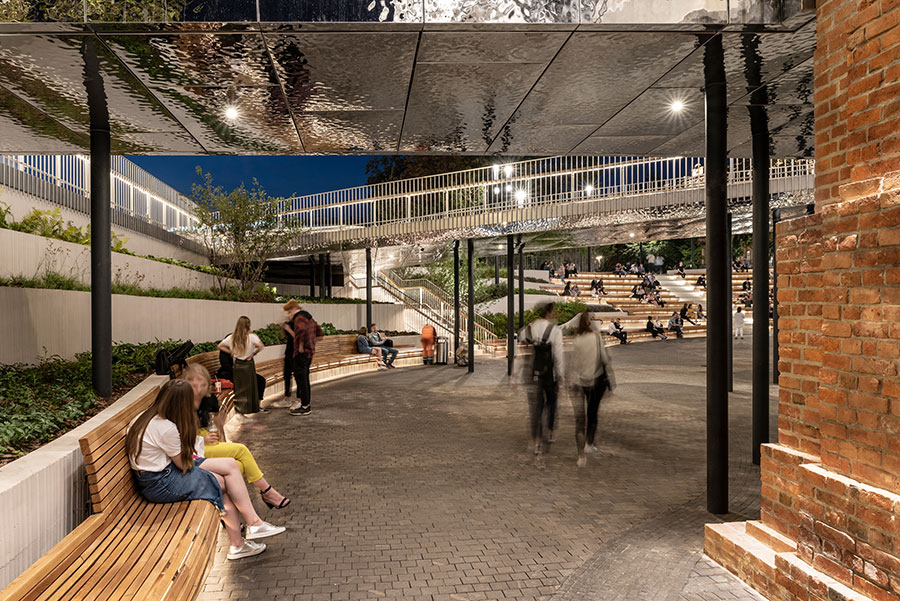 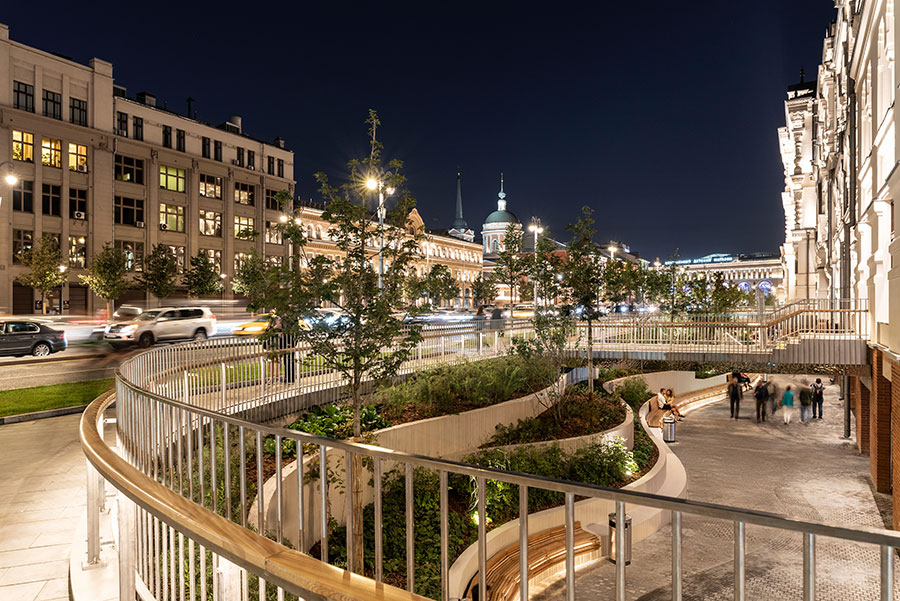 The differences in level play out in the form of a gigantic amphitheatre, descending in steps from the garden square to the square beside the Museum. The Museum can be accessed from this level and over a pedestrian bridge or from the direction of Lubyanka Square, where a new entrance has been organised from the lower ground level into the Polytechnic’s new educational and cultural centre, set up around the Grand Lecture hall famous in the 1960s with its poetic recitals. The hall and rooms around it are set aside as a separate complex in the Museum to focus on varied public events, including lectures, discussions and concerts. This part of the Museum can be accessed from both the lower ground and street-level by a pedestrian bridge.

Thanks to the reduced number of lanes along Novaya Square, two pedestrian routes are set out along the facade of the Polytechnic Museum: one on the lower ground level of the 'Museum Square', and one forming a 6-metre wide pavement at street level, separated from the first by trees and planting. 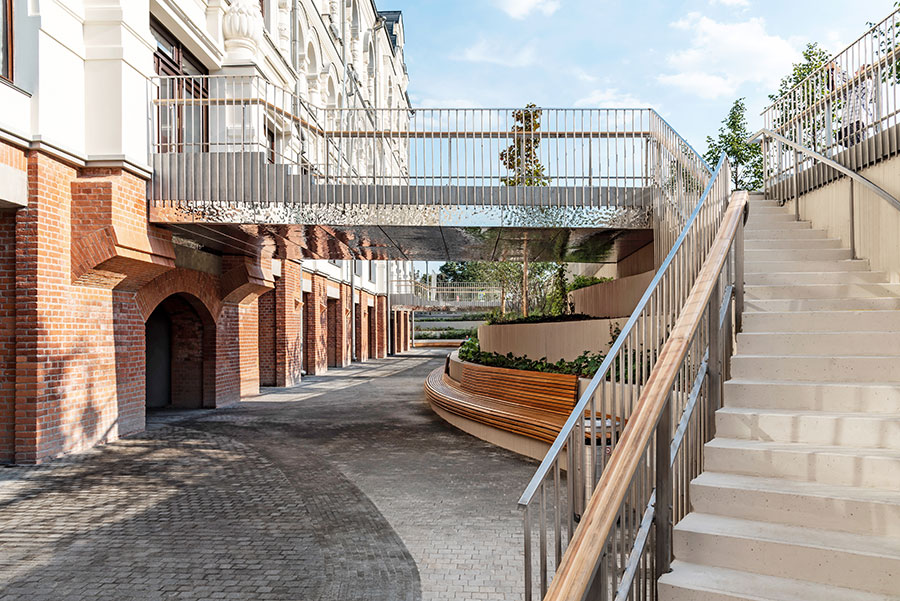 The lower ground street became a ‘vertical’ garden of specially selected plants arranged on its slopes. The width of this street is 5 metres. It goes in parallel with the Museum facade and has arcades opening onto it from its lower level. Shops, cafés and galleries will be located here. From this area, visitors will be able to make their way onto Museum Square or into the Metro. The entire lower ground level is provided with heating and reinforced stormwater drainage to enable the comfortable use of this space even in winter. ← Revolution Square↑ ArchitectureLandscaping for the “Heart of the Capital” Residential Complex →