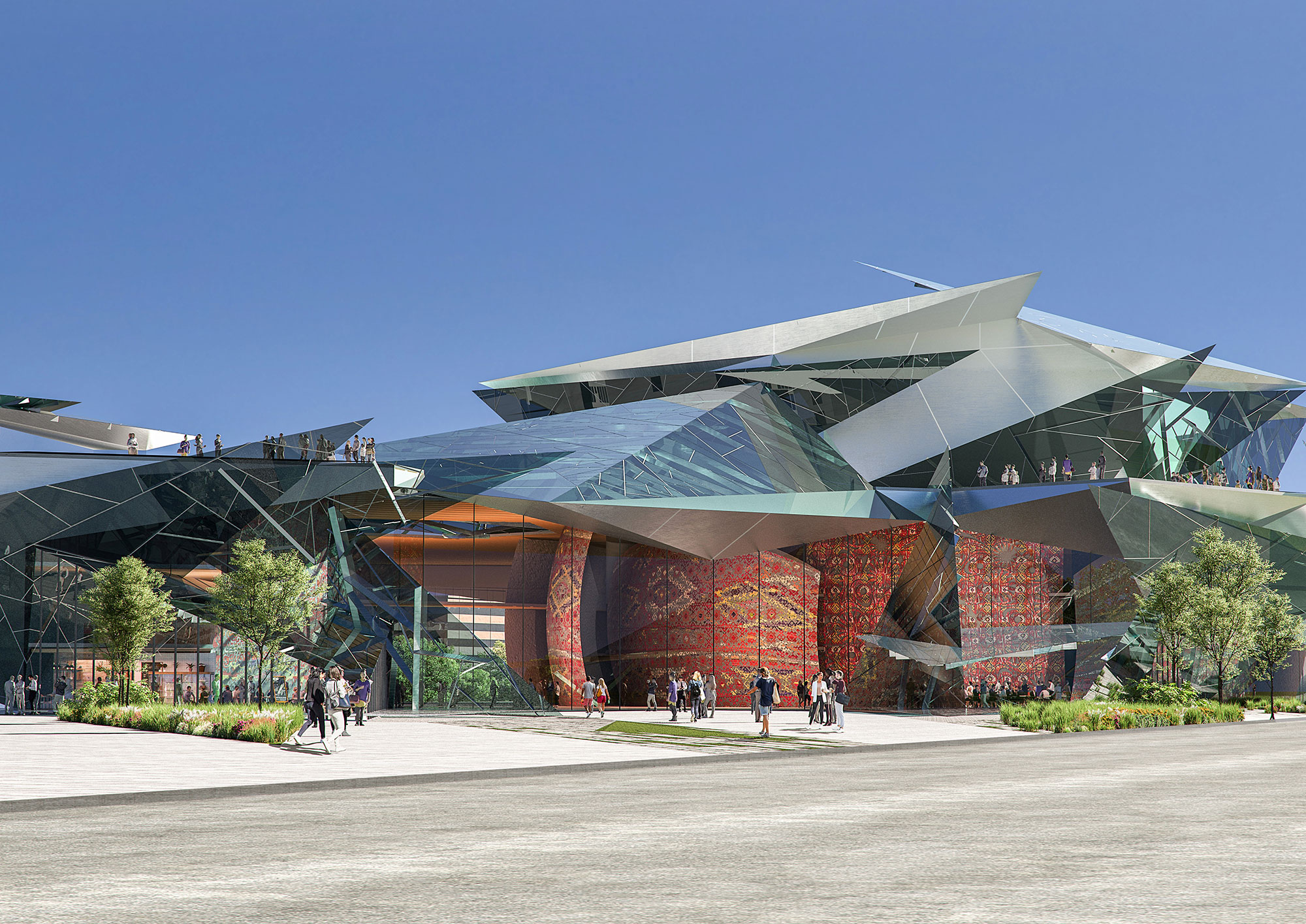 The project “Soaring sails” with bright Tatar ornaments won the competition for the concept for the Kamala Theater new building in Kazan. The project is implemented by the consortium of Russian, Japanese and German architects and designers (Wowhaus, Kengo Kuma and Associates, Werner Sobek, German Bakulin).

To create a new national symbol for Kazan and Tatarstan by combining elements of Tatar culture with the latest acoustic and stage technology.

Design a permeable cultural space with a façade based on the image of the 'ice flower', a unique natural phenomenon on Lake Kaban.

The new theater concept blends the nature and landscape of Kazan, as well as Tatar national symbols. The triangular elements of the facade are primarily "ice flowers" – unique natural Kaban Lake phenomena. At the same time the triangular elements are reminiscent of the original Kamal Theater building with its recognizable facade. The former Kamal Theater stands on the opposite shore of the lake and will be clearly visible from the viewpoints of the new theater. 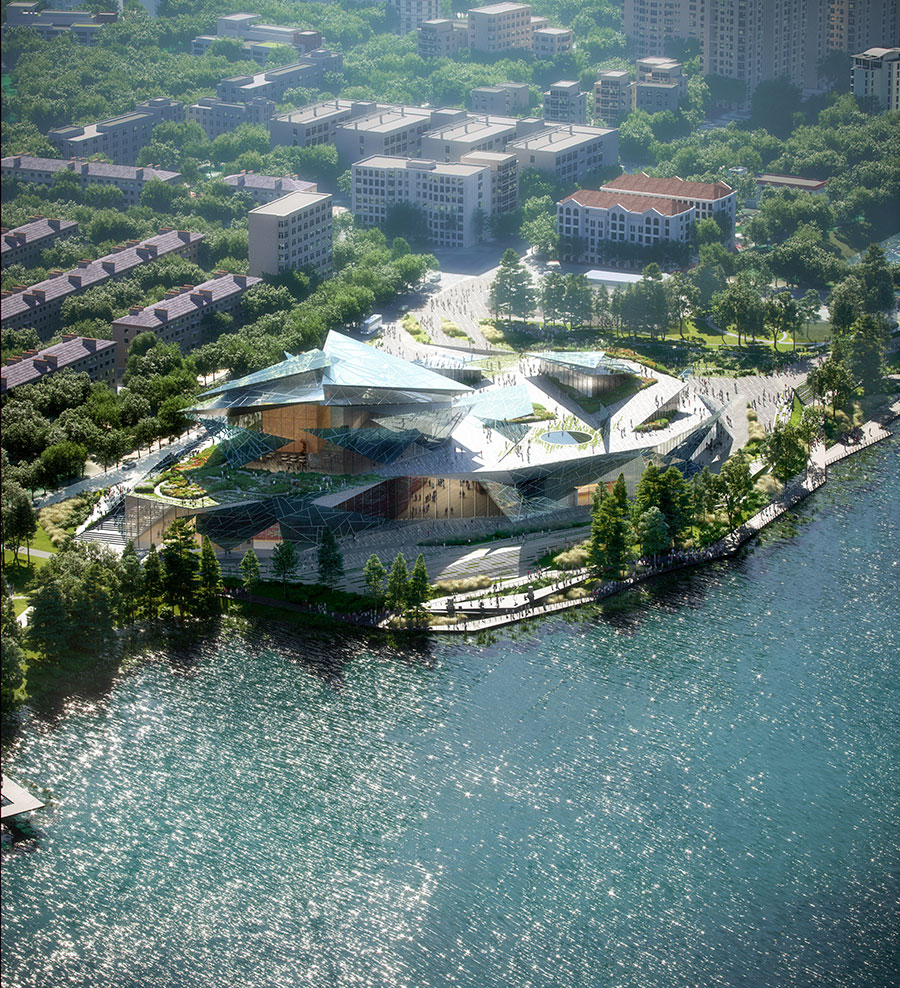 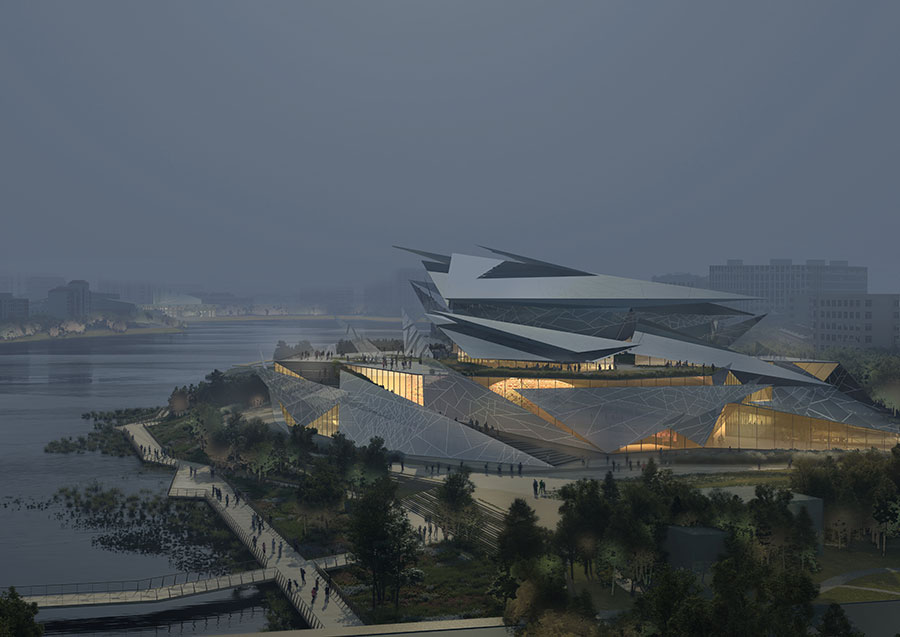 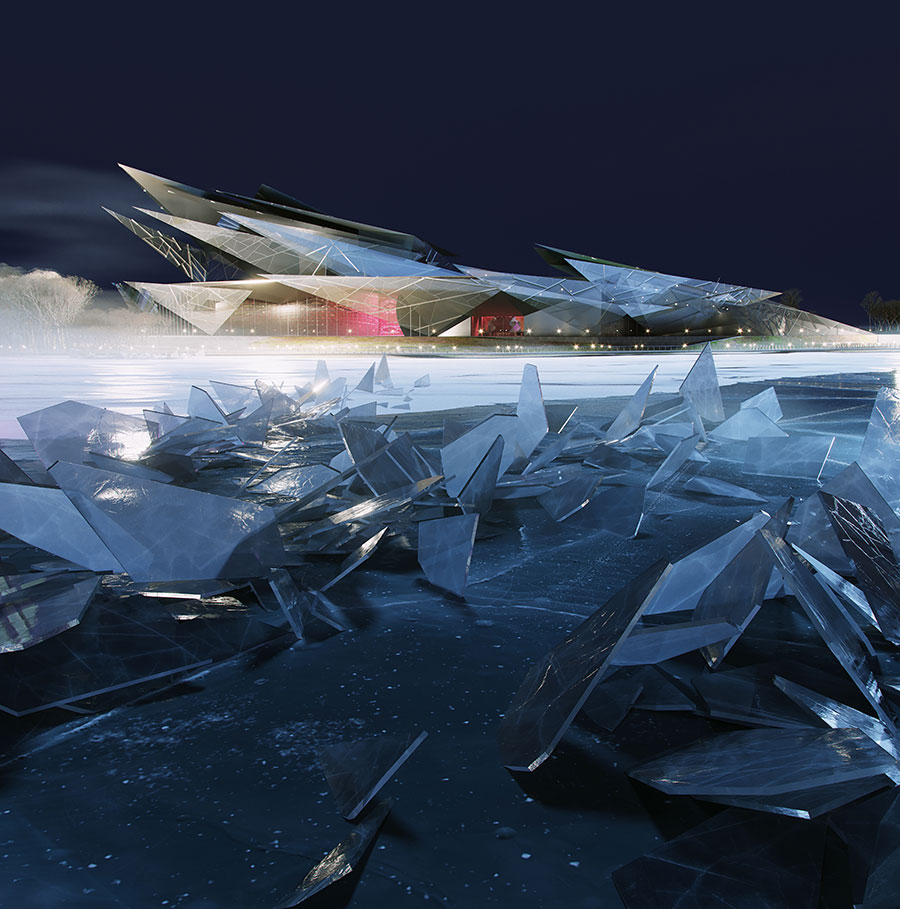 The concept is based on three layers.
The first layer is the inner space with the halls, foyer, lobby, theater laboratories and office space. The ground floor of the building focuses on the primary functions remaining open and welcoming. All interiors are full of soft and warm colors and ornaments typical of traditional Tatar art.
All theater halls are located on the same plane. The theater is intended to be completely permeable and accessible. It is open to visitors and events 24/7 all year round. 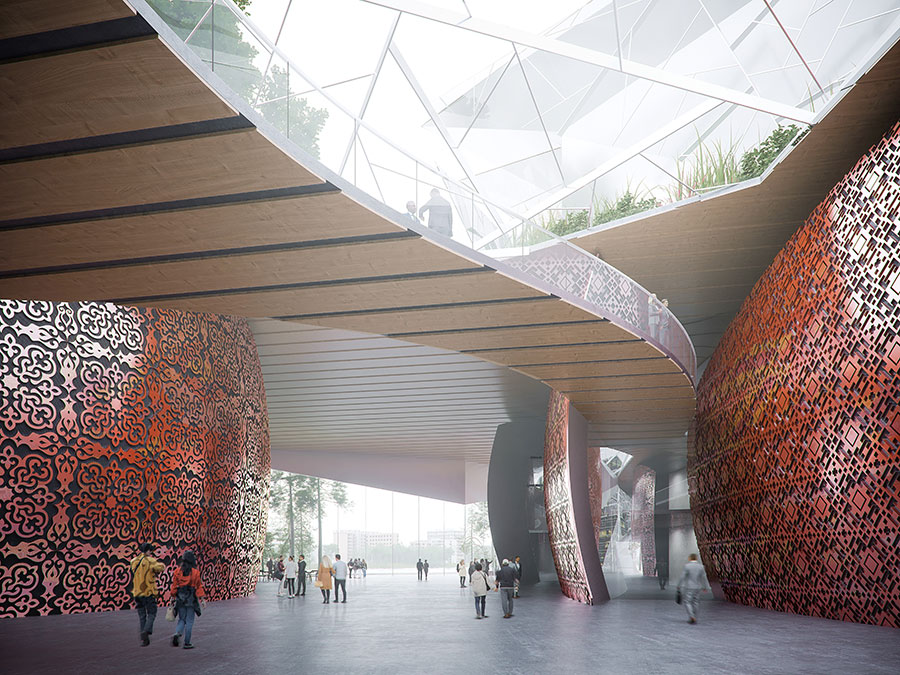 The second layer is the outer shell of the theater. The theater complex, including its roof, will become a park - a rich public space that invites to interaction. Climbing several easy slopes will get spectators to the theater. A view of Lake Kaban will open from the observation decks. The park will accommodate dancing grounds, cafes and summer stages. 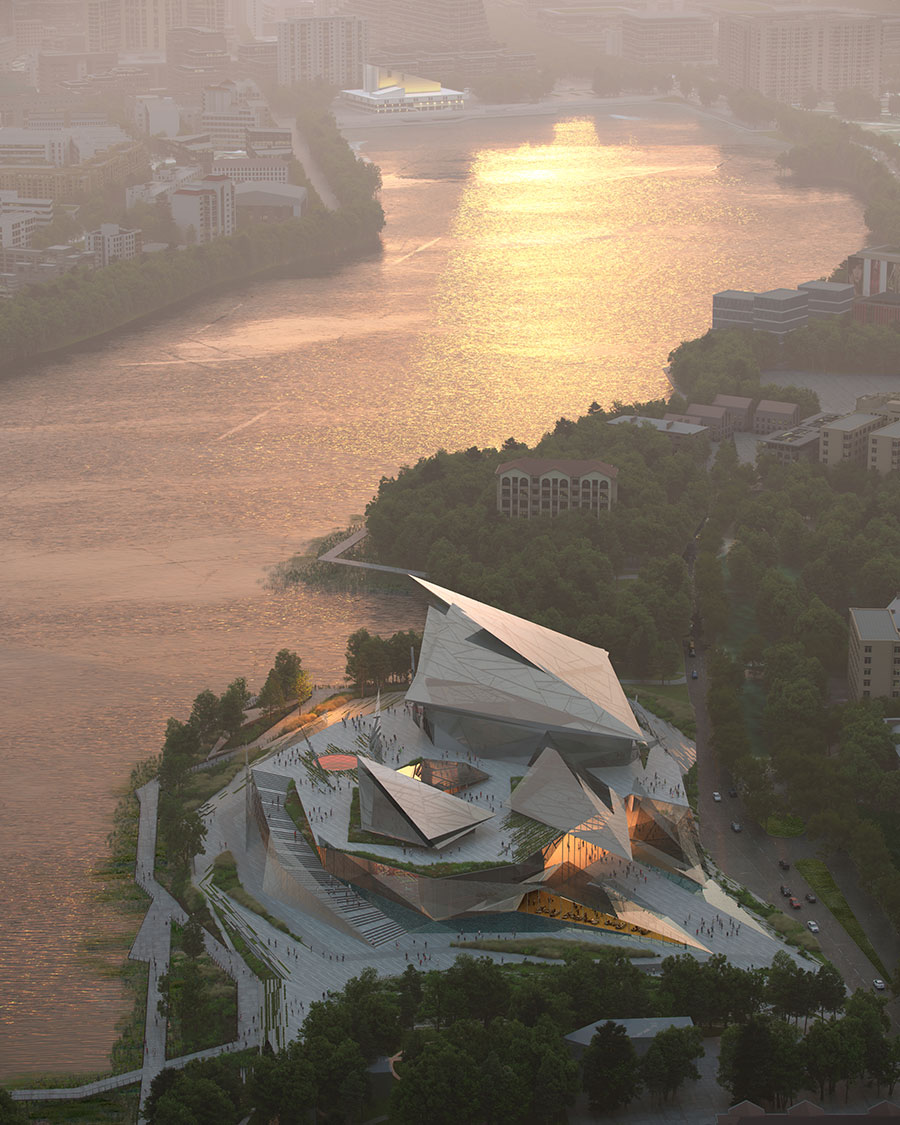 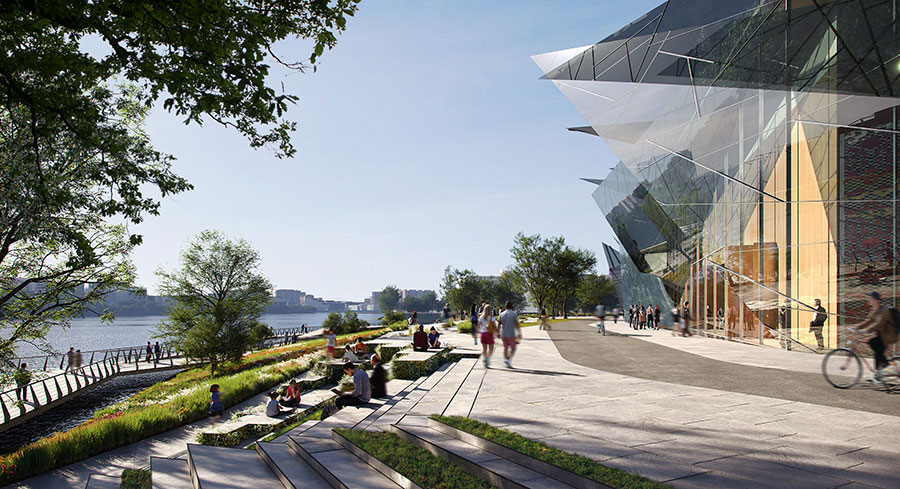 The third layer is a glass facade with triangular elements. The facade reflects the city and its surroundings creating visual transparency. It also dissolves the mass of the building. The light and ornament of the hospitable interior of the complex come to the fore in the evening. 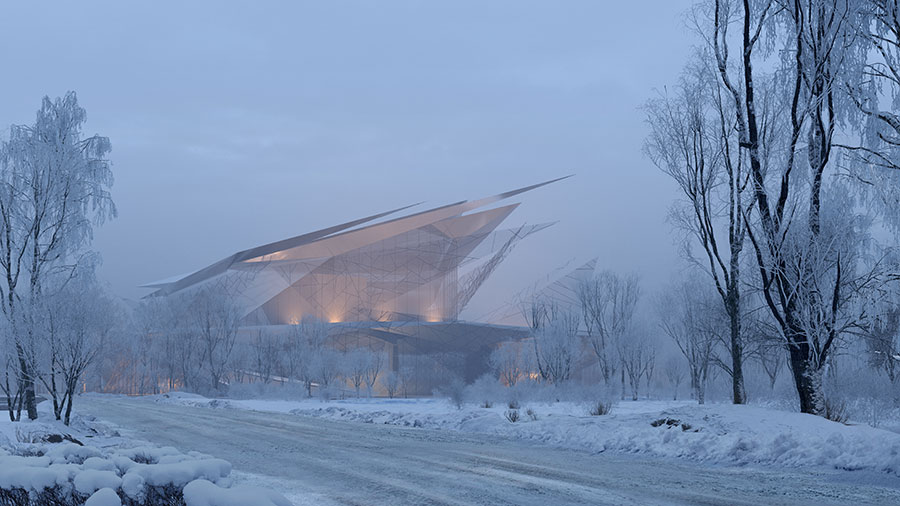 The changeable climate and distinct seasons will allow the mirror façade to adopt different colors and shapes. Architecture and nature thus do not confront each other in visual space, but are mutually integrated. Architecture becomes a medium between the city and the surrounding landscape. 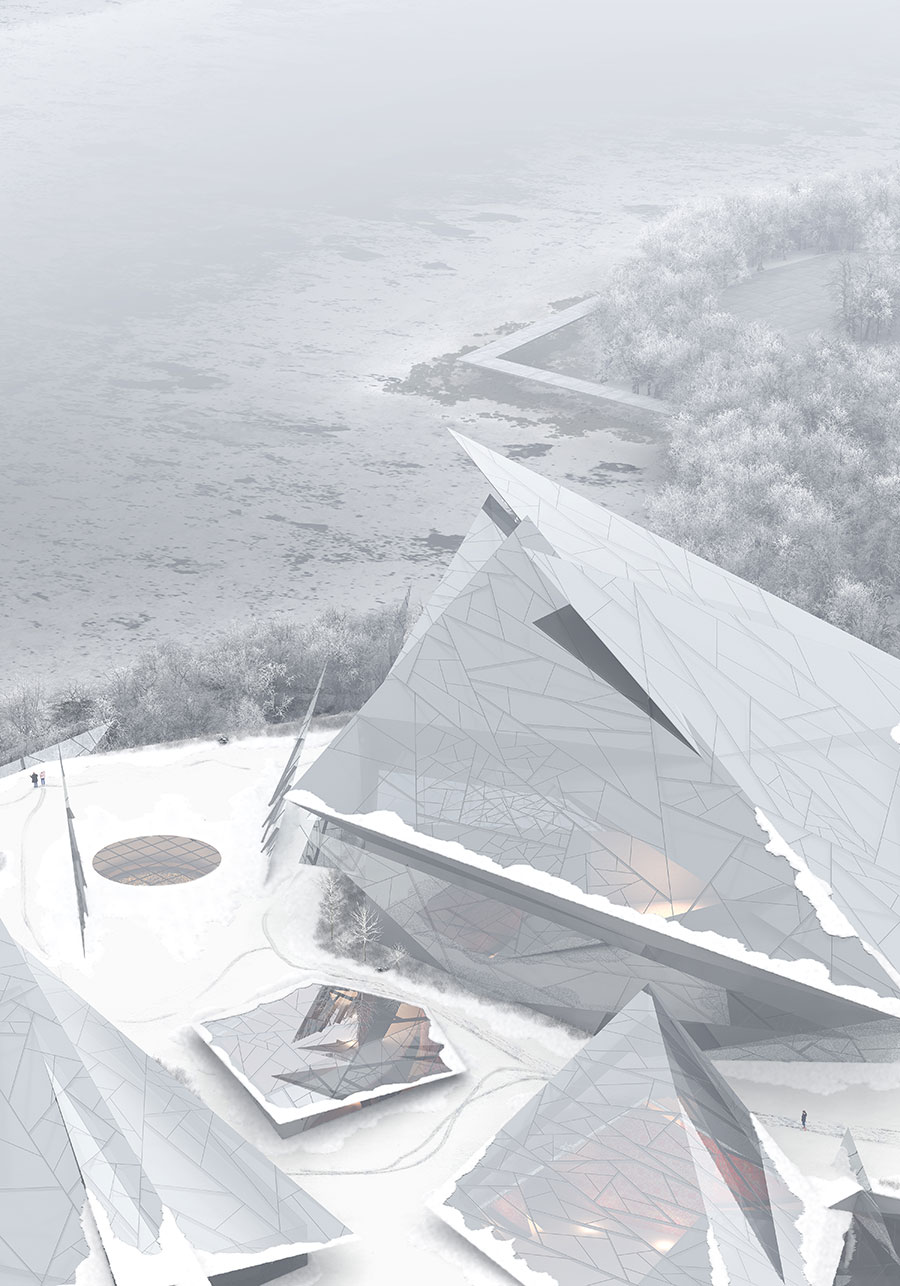 Three main theater halls deserve special attention. The main one is the Great Hall – a solemn, but not excessively official space. Its balconies and colonnades create the viewer’s impression. Smooth semicircular shape of the hall and the audience seats encourage spectators to feel unity with each other and with the actors on stage. 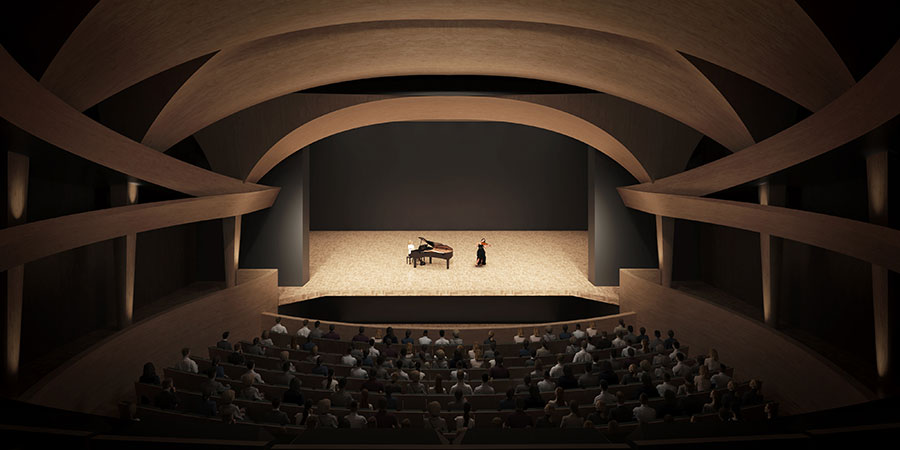 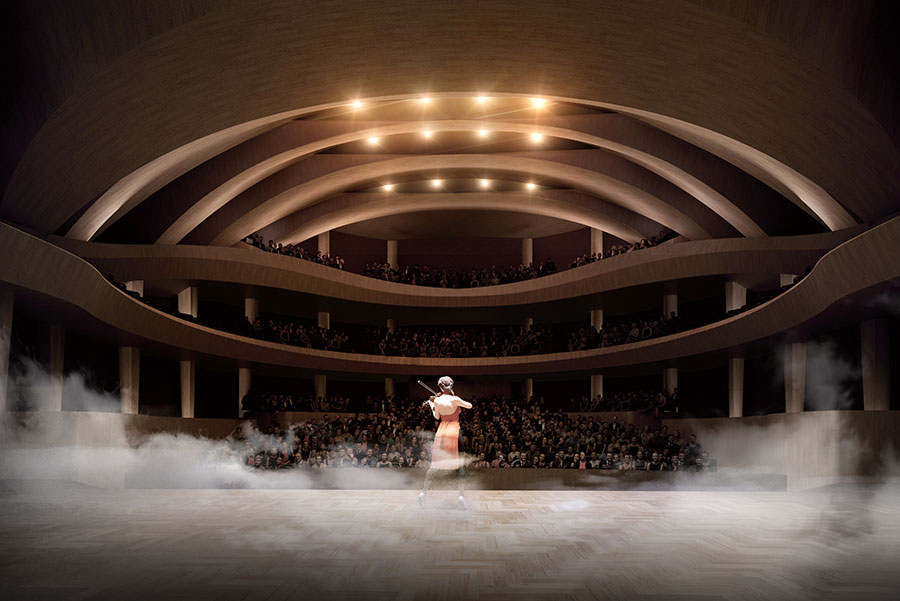 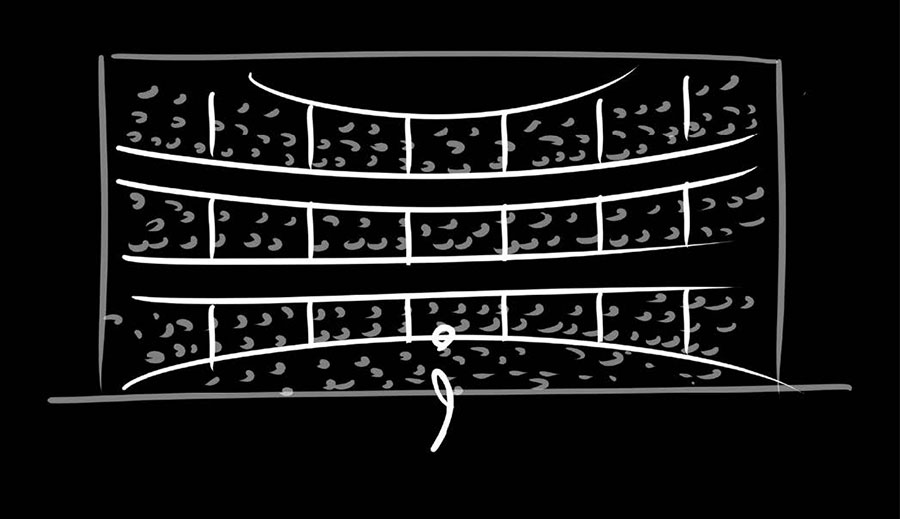 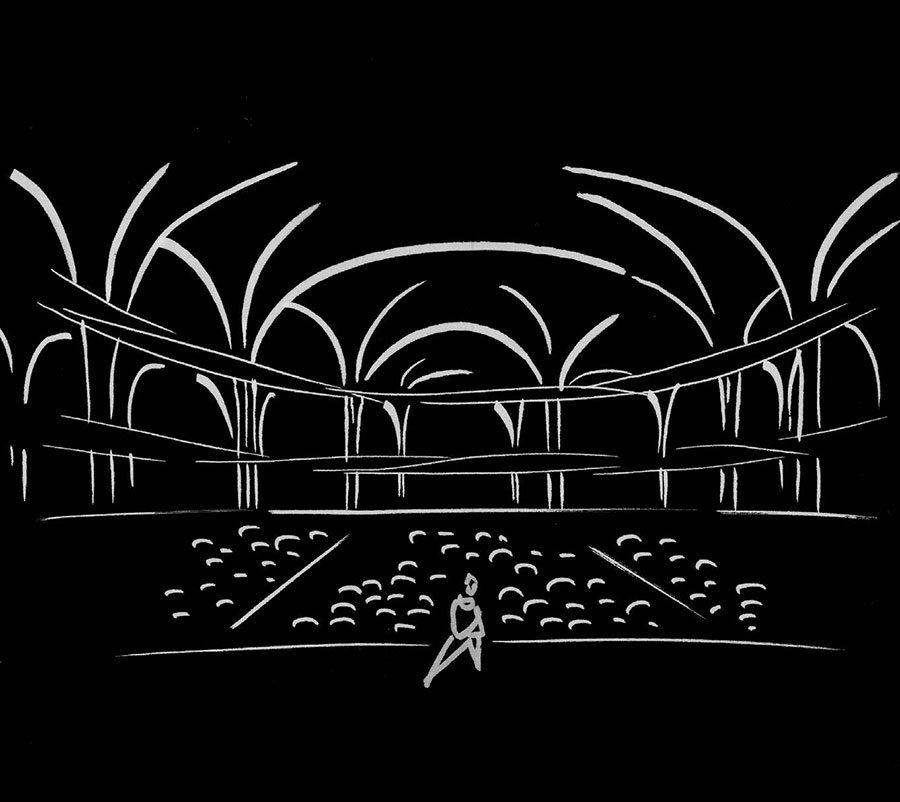 The Universal hall symbolizes the traditional Tatar dwelling. Decorative fabric panels similar to national carpets and adorned with Tatar ornaments are installed in the hall. They are mobile (designed to roll down on special rails) and can be opened in a moment. At the same time, the space can be transformed by a mobile wall - the open configuration provides a view of the park and the surrounding area. To focus the viewer's attention on the stage, the hall can be converted into a Black Box configuration with dark walls. 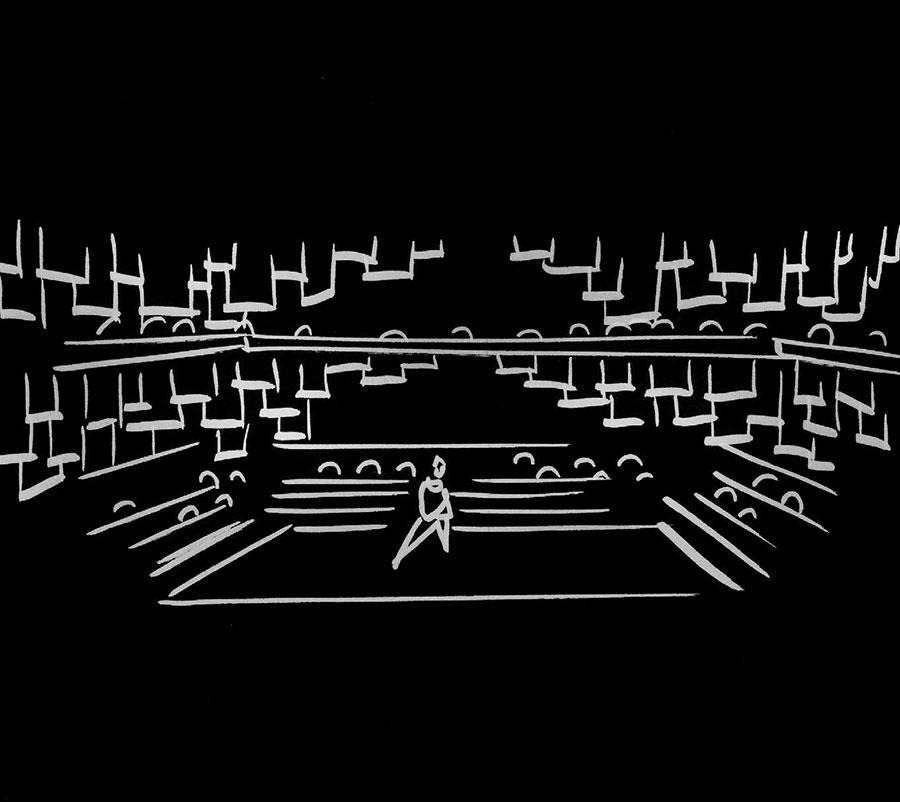 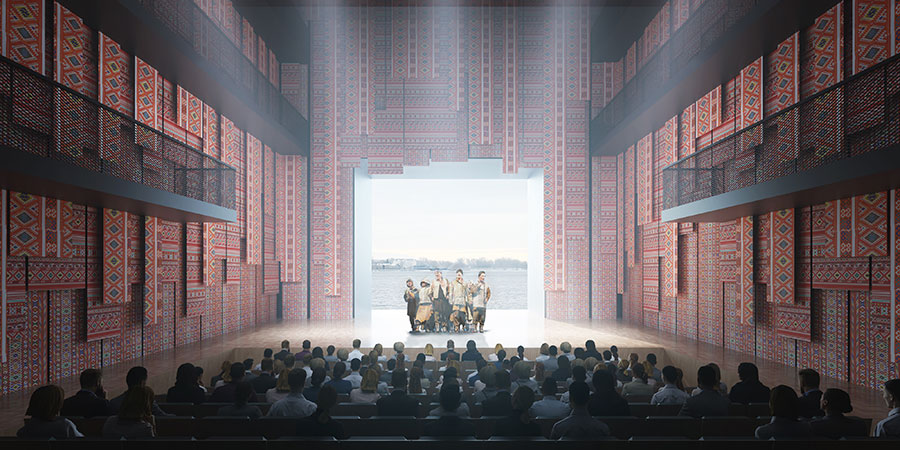 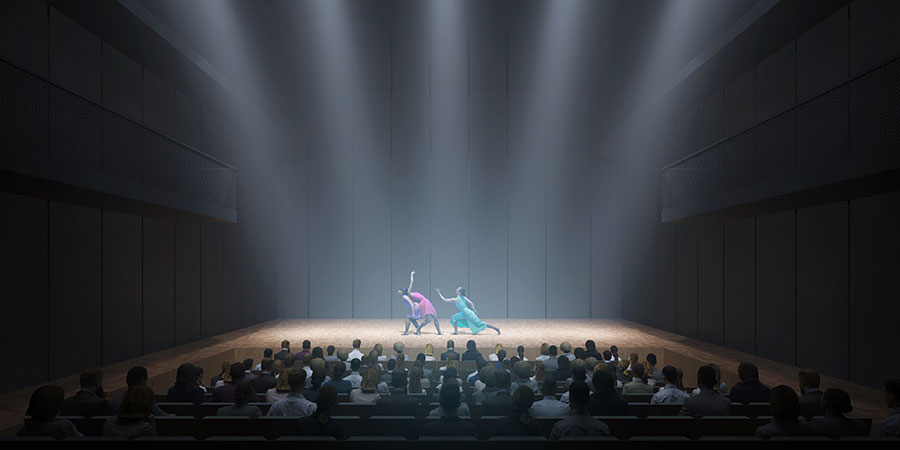 The Round (Eastern) Hall creates a feeling of maximum proximity to what happens on the stage action due to the circular stage (arena) with seats for the spectators around. A sliding ceiling brings the sky and stars into the hall, and a mobile wall with a view of the Lower Kaban will transform the water surface into a living decoration and even a place of action. Numerous multi–layered panels in this hall are inspired by traditional Tatar women's jewelry - for example, khasite, a bib - izu, as well as a kalfak covered with silver coins. 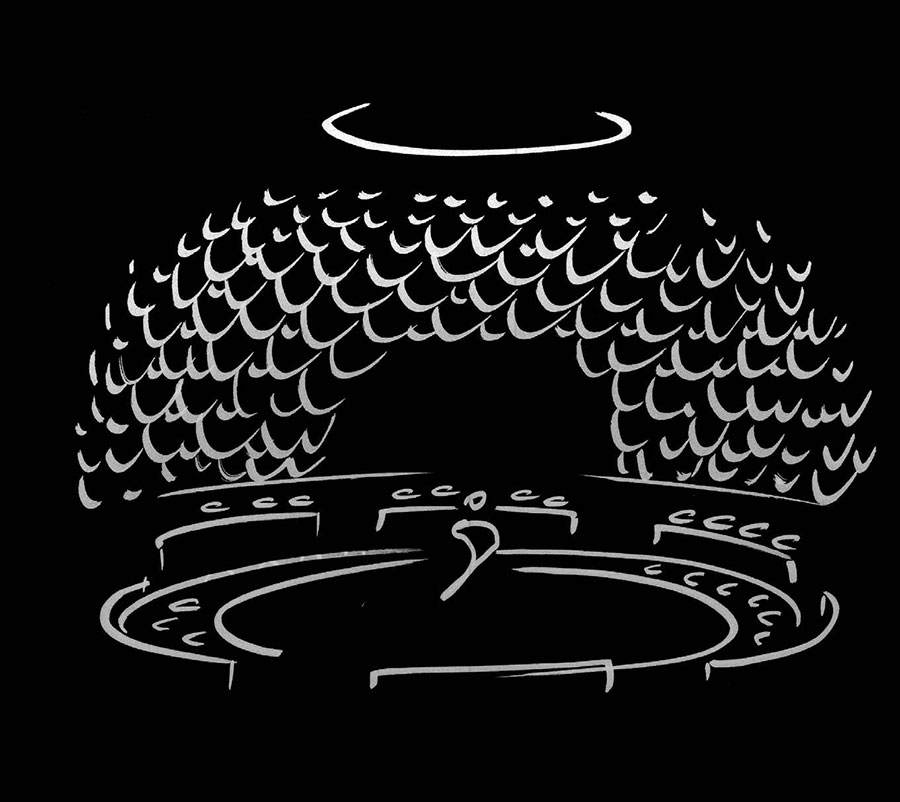 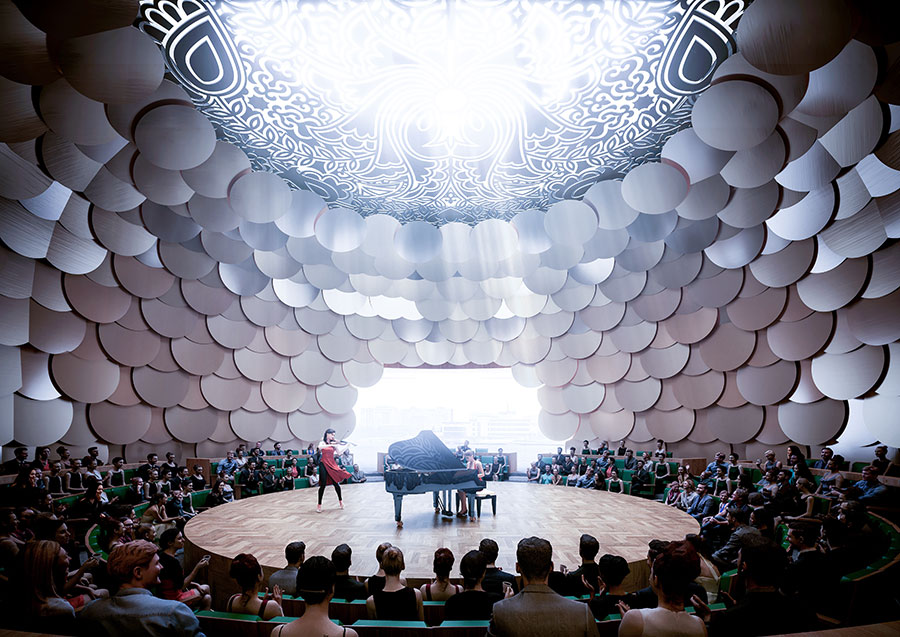 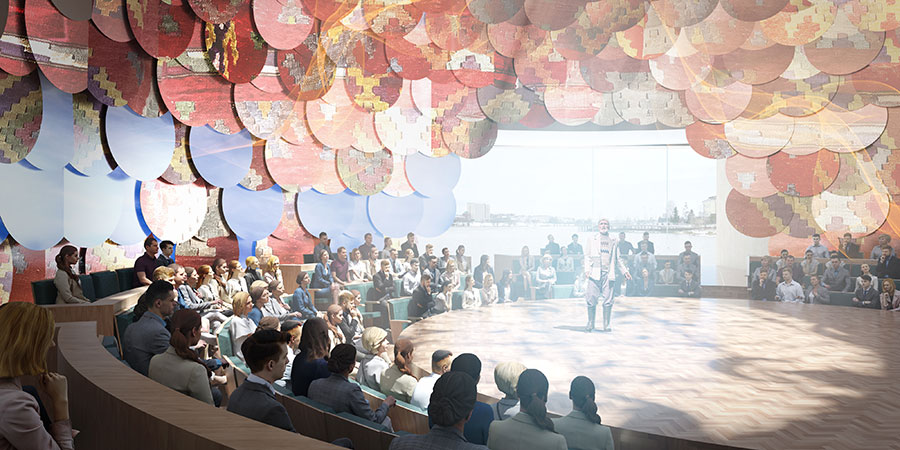 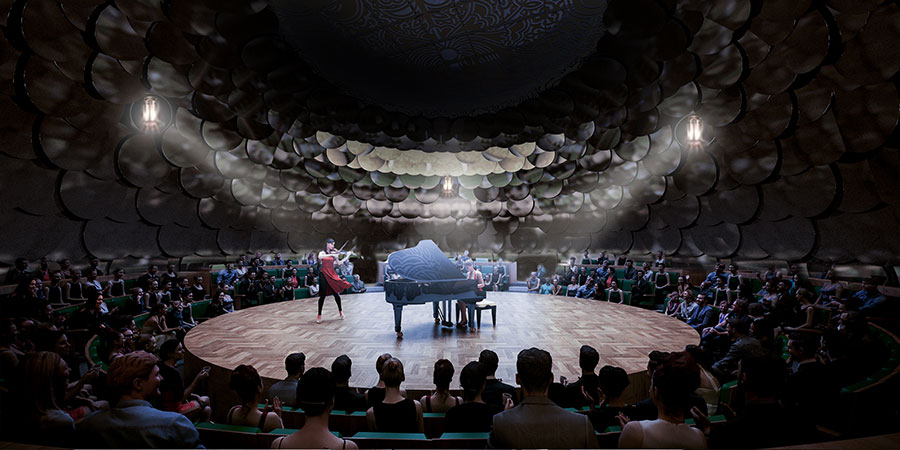 From the point of view of landscape architecture, the project implies preservation of most of the existing trees. At the same time, the roof of the building gardens and flower beds becomes a continuation of the park space. The plants are selected in such a way as to attract birds, bees and butterflies. The palette of shrubs, groundcover and herbaceous plants is selected from the species typical of the local flora. 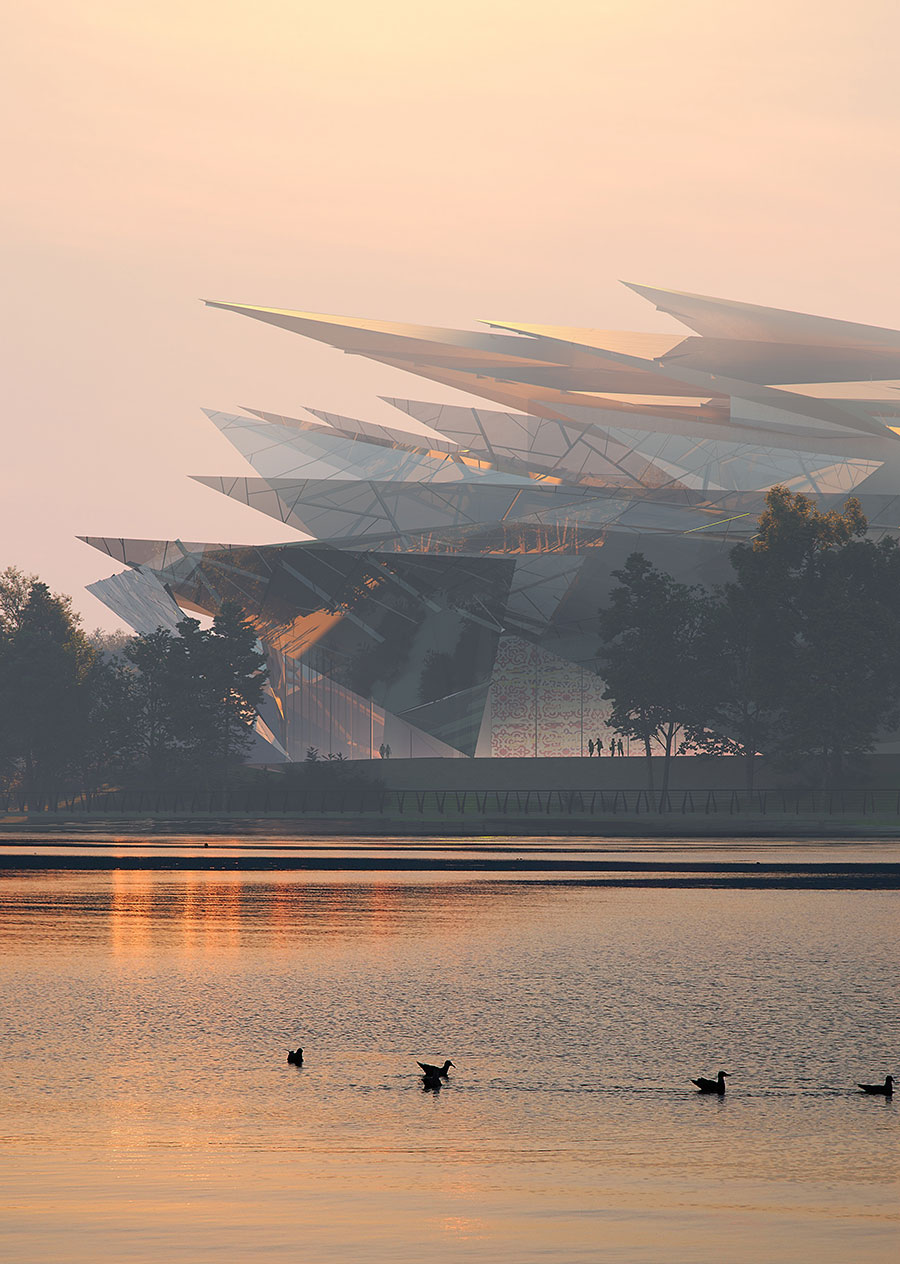 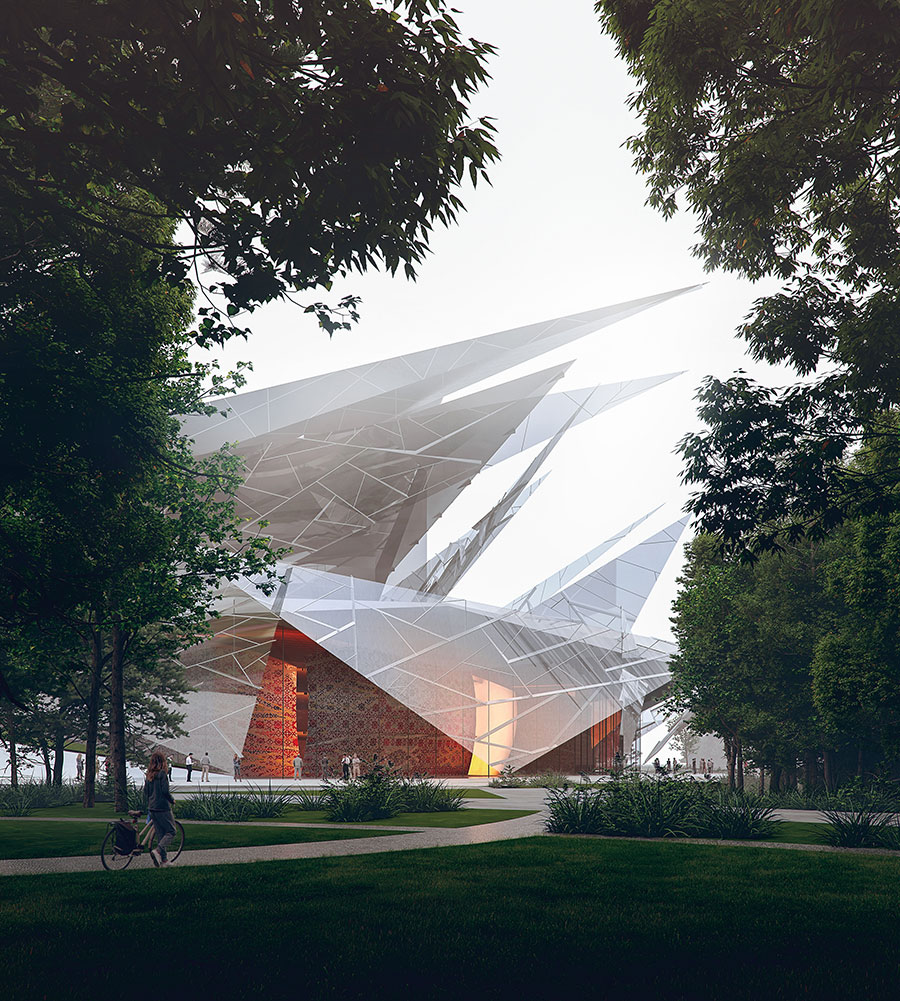