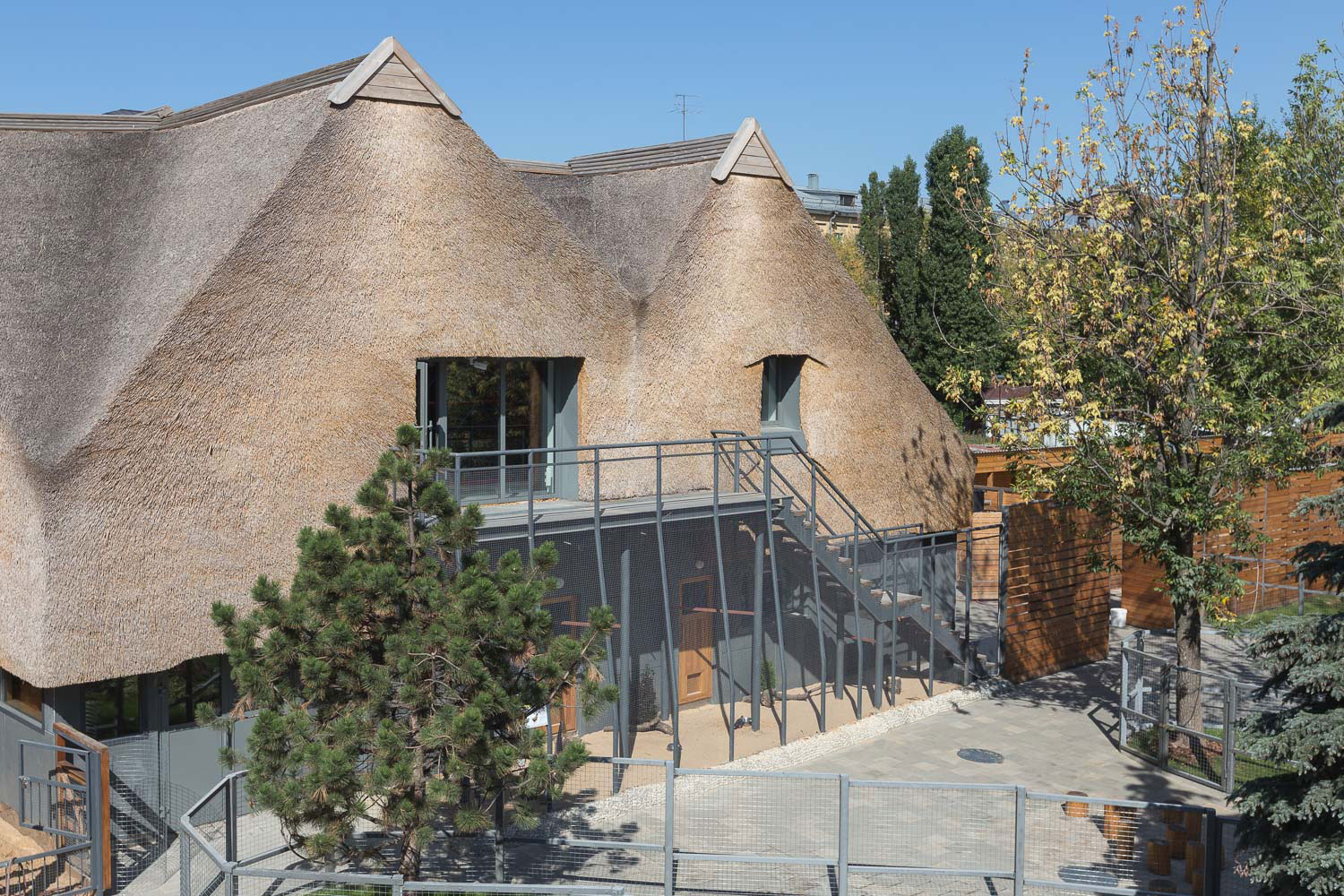 Children’s Area at the Moscow Zoo was not simply redesigned, but also reinvented as a place where where children, adults and animals are are on an equal footing.

To resurrect and imbue with new life one of the most barren and little-visited places in the zoo. To establish an environment giving rise to qualitatively new usage formats and scenarios. To provide a comfortable environment for animals within a confined area while facilitating programs of varying durations for all seasons for children of all ages. To show children how animals live in a more natural habitat.

A zoo should not be an entertainment and a place where animals are penned up, but a learning environment. The new environment conveys the idea of nature preservation, and includes new play-based educational facilities. The main point of the new Children’s zoo is to treat the children's area of the zoo as a public space where visitors and animals could be partners. 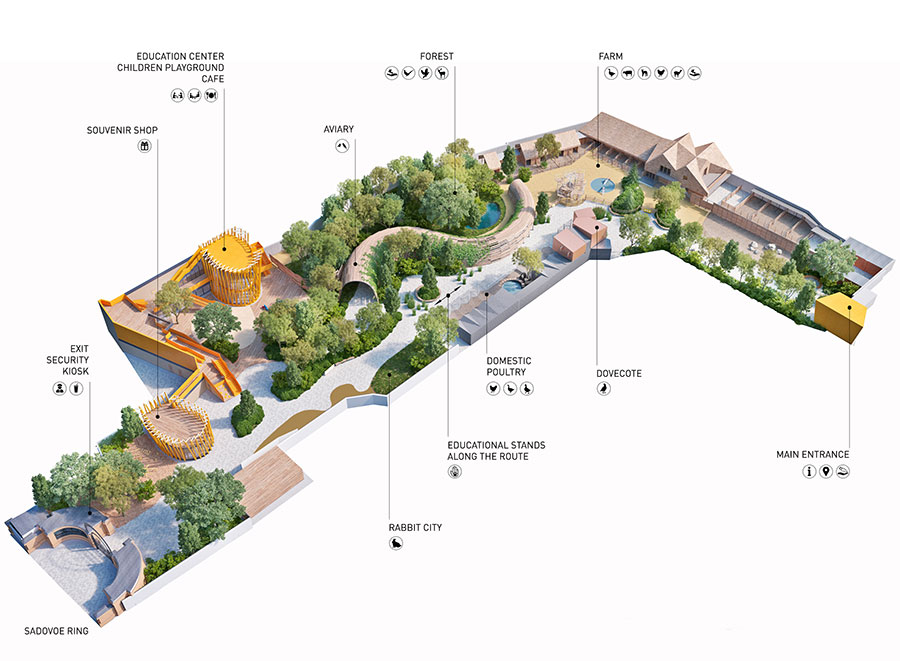 The Moscow Zoo is one of the very oldest in Europe. It finds itself in quite a precarious position: located in the center of a megalopolis, it has limited opportunities for further development by means of territorial expansion. But it can enhance the quality of the space it does have. Until quite recently, all that was offered to young visitors were fairy-tale themed tours, where even the selection of animals had to support the story line. The children’s zoo was in need of an entirely new direction, a direction which was provided by Wowhaus in close cooperation with zoo specialists, sociologists from KB23, and Dmitri Knorre, a biologist, popularizer of science, and designer of board games for biology. 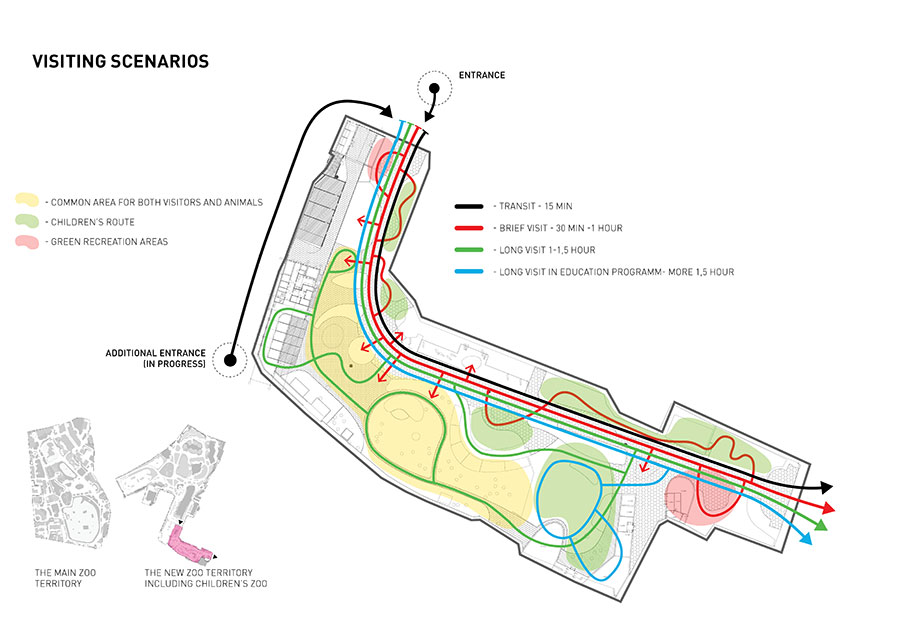 The resulting approach envisions children’s visits to the zoo as an element of their socialization – in this way, the zoo ceased to be a place where kids simply watch exotic animals, but instead becomes a common playground and a learning enviroment. The animal and the kid can play together and learn from each other, however zoo inhabitants can easily hide when it is needed. Thus, trough experience and plays children learn easily. What is more, the new inhabitants are domesticated animals, species which have been living near humans for ages. 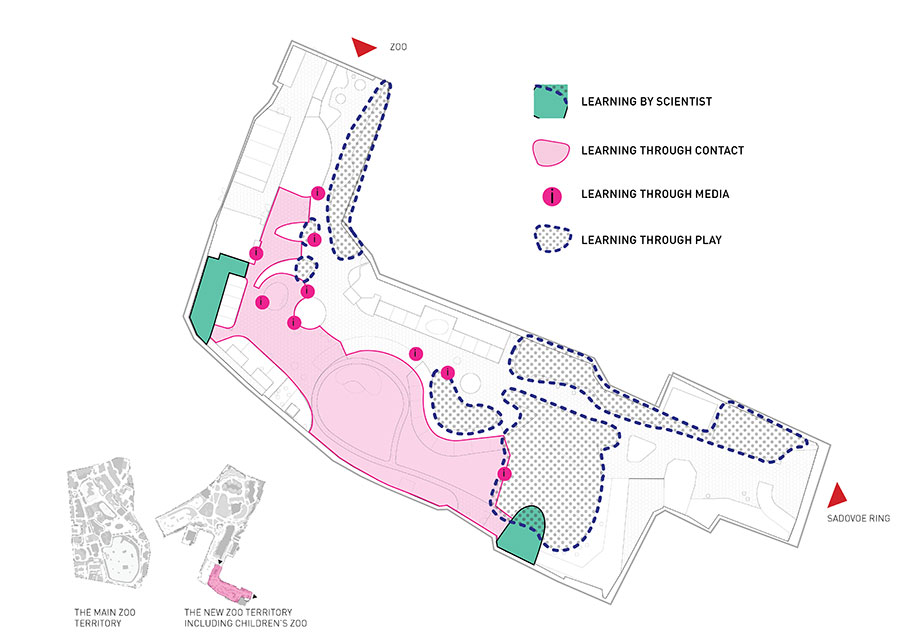 The new space contemplates three potential routes: a briefer one, a longer one, and one with separate activity modules. Animals are situated not in cages as is usually the case, but in open areas allowing them to play and otherwise carry on more naturally. 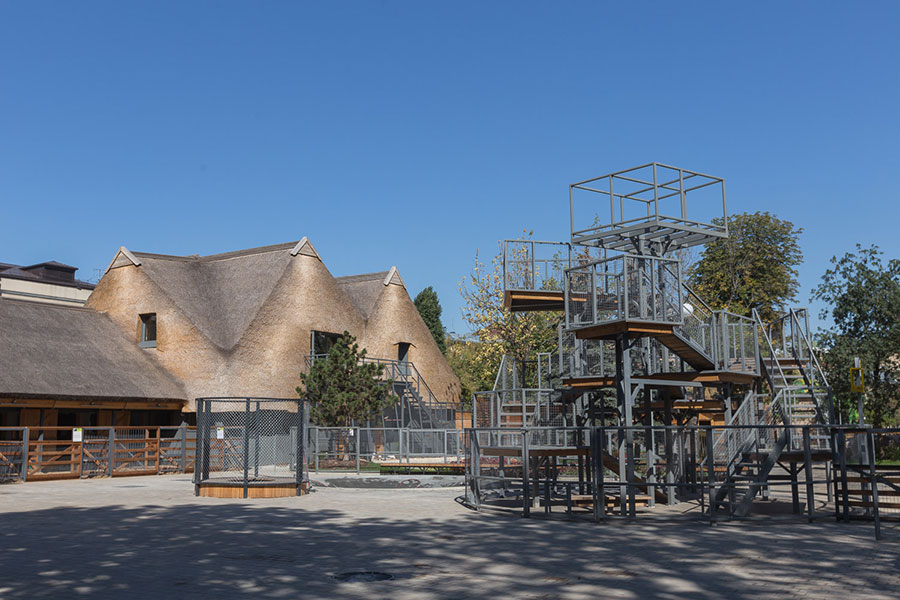 The zoo is divided into several areas. During briefer outings one can simply pass by the enclosures and look at the animals. There are other programs for those who have more time — they can come right up to the animals, touch them, and look after them along with zoo associates. Next to each area is a special play area for children arranged in the same fashion and augmented with educational play opportunities: a child can crawl into a nest like a bird, or crawl through a like a rabbit. This is not just fun, but educational as well – children best come to learn about the world through play, imitation, and movement. 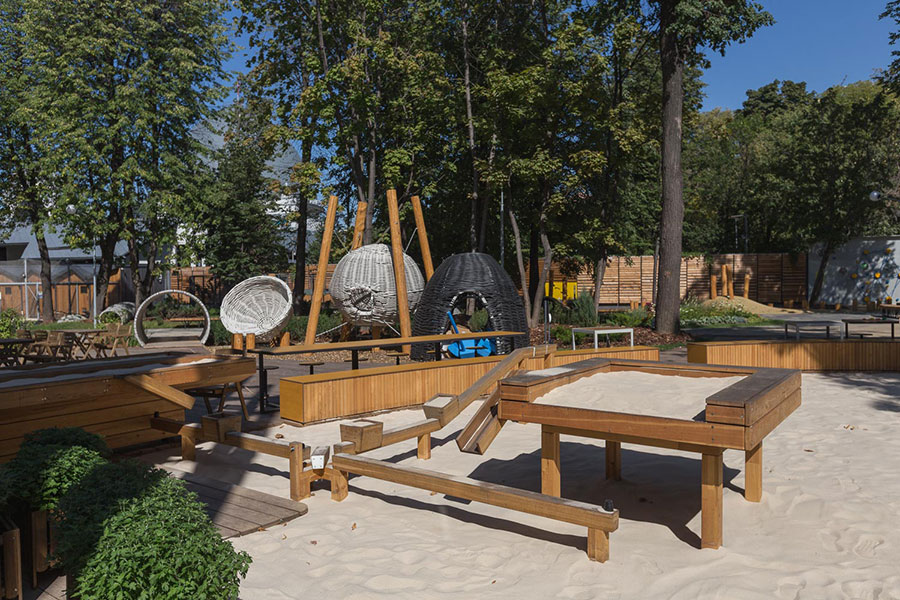 The first area is the “Farm” where geese, cows, chickens, goats, and other animals live. 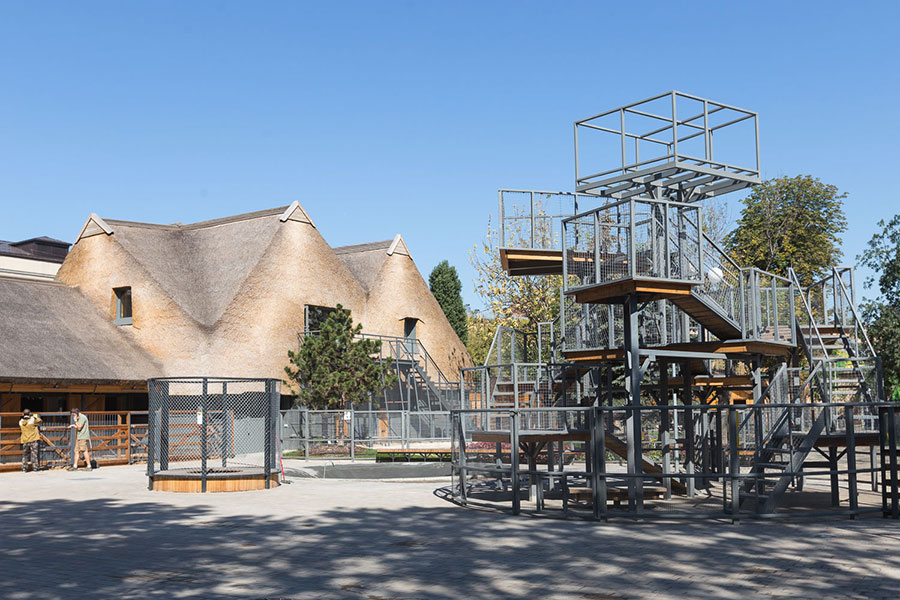 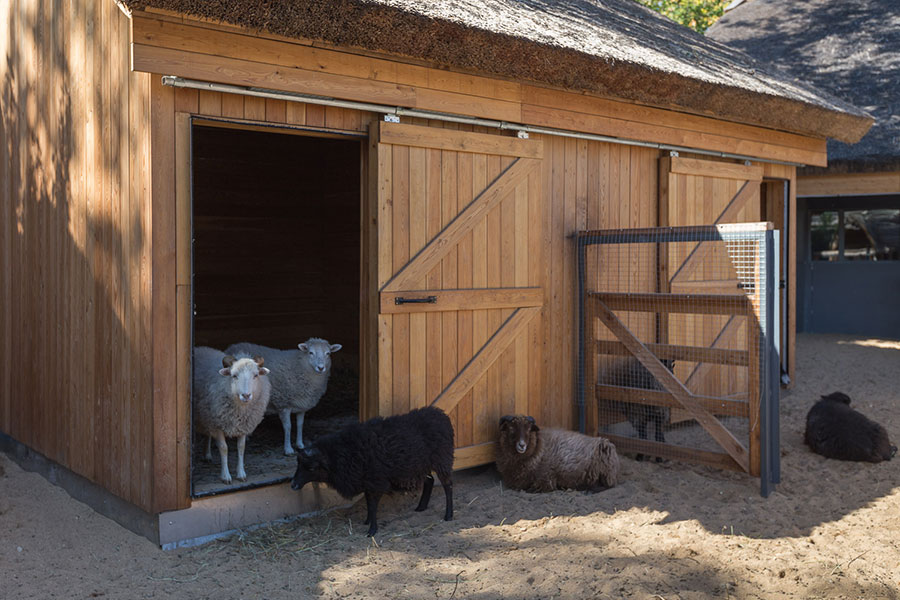 Beyond the farm is a forest zone and a long aviary tunnel – an enclosure for birds. Here smaller midland birds can fly freely about, while children, immersed in the cover provided by intertwining small branches, can feel as if they are in a dense forest, and get to see birds in their natural habitat. 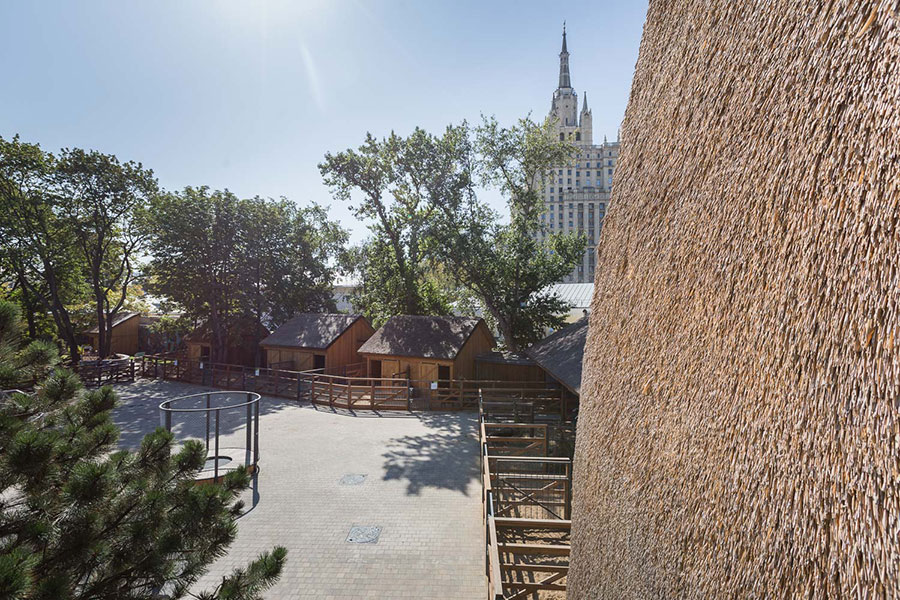 By providing relief from the noise from the nearby parts of the children’s zoo, the aviary also serves as a protective buffer for the area inhabited by deer.. 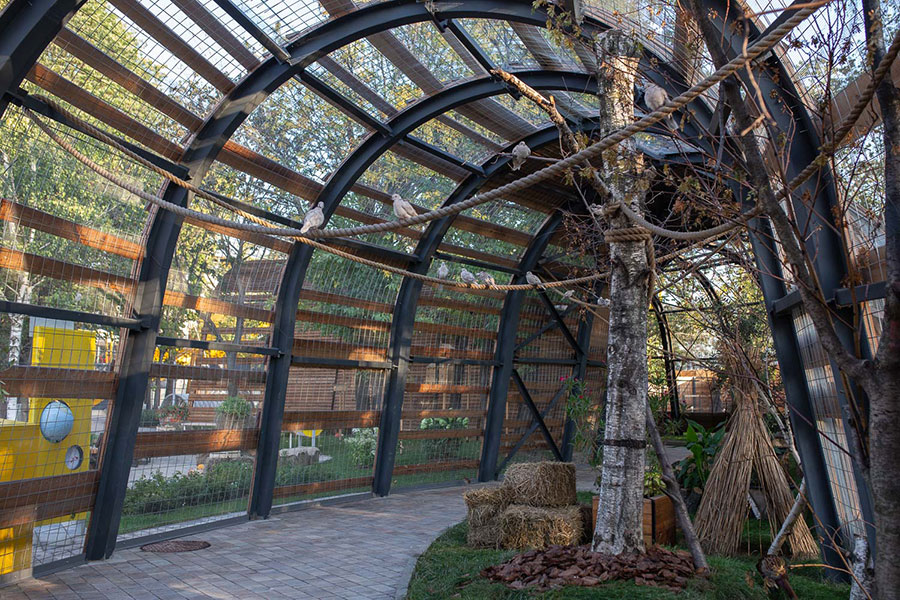 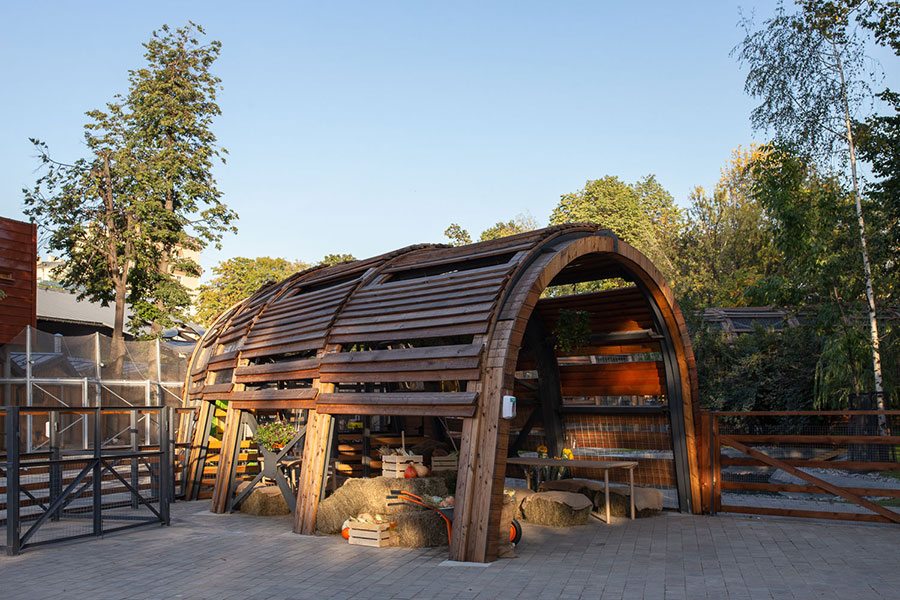 Across from the aviary, stretching along the opposing wall of the zoo, is an area with domestic poultry, beginning with a pigeon coop which should remind some adults of similar ones from their childhood yards and rooftops. 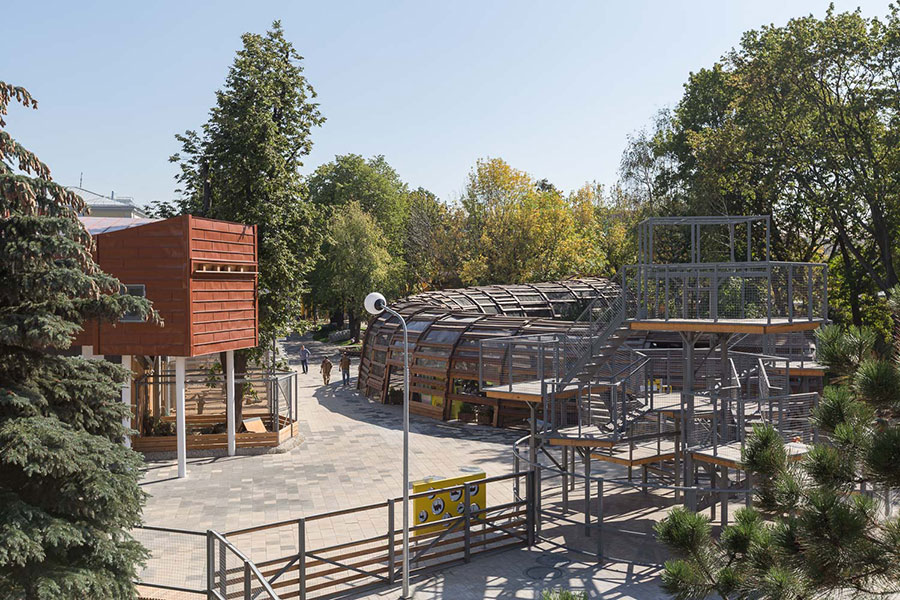 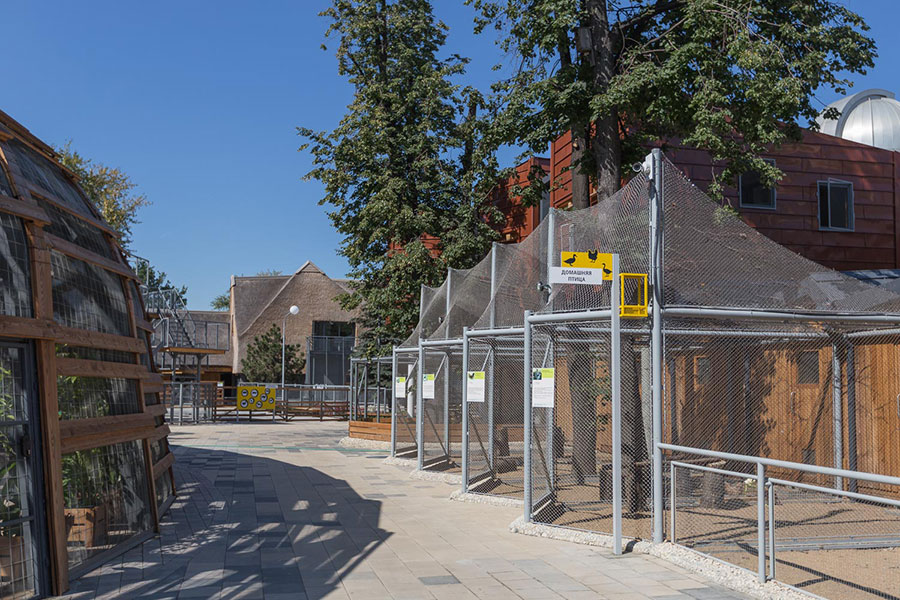 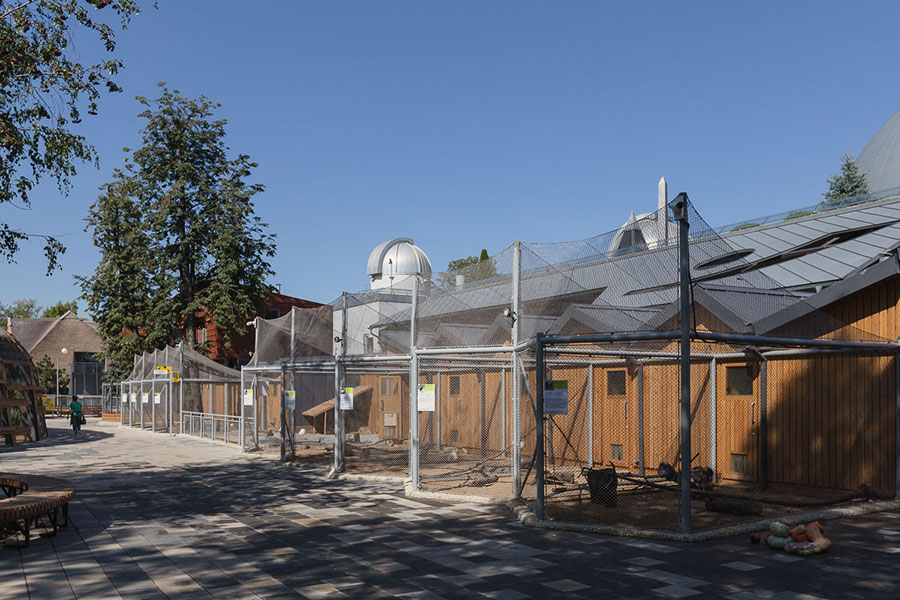 One of the final areas – “Rabbit City”. 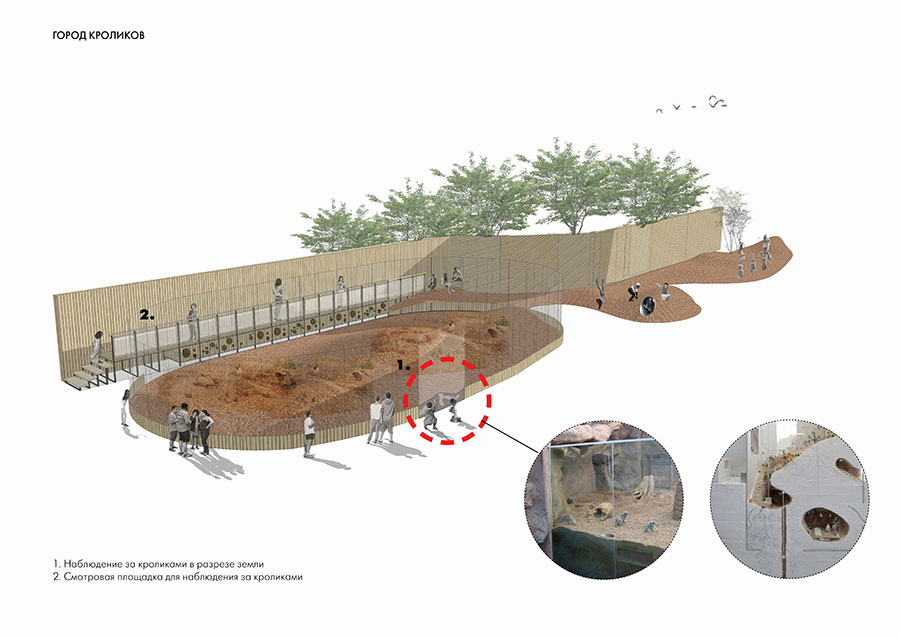 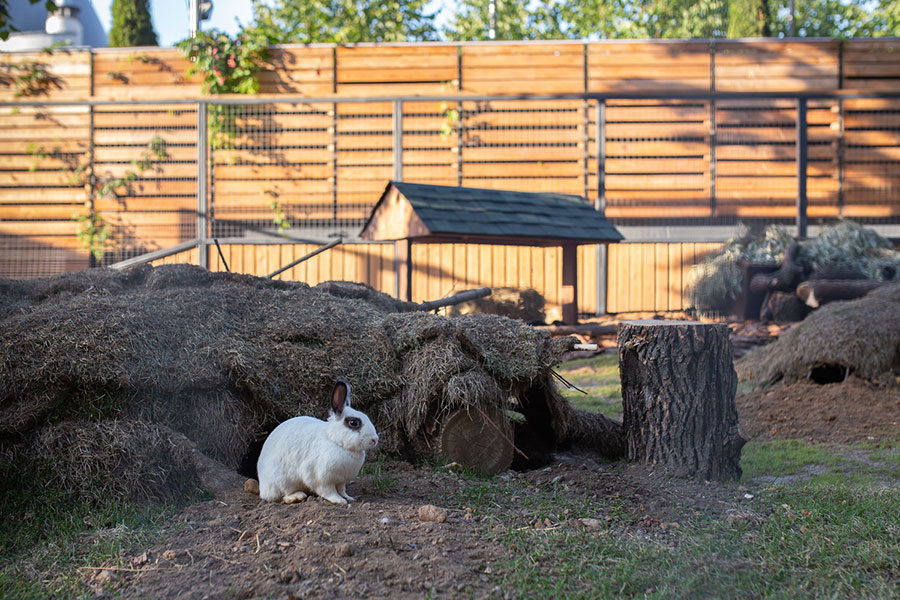 At the very exit is located an area with no animals. Here one can simply take a quick break: there is a cafe, and a play area intended for quieter games. There is also a year-round education center located here. 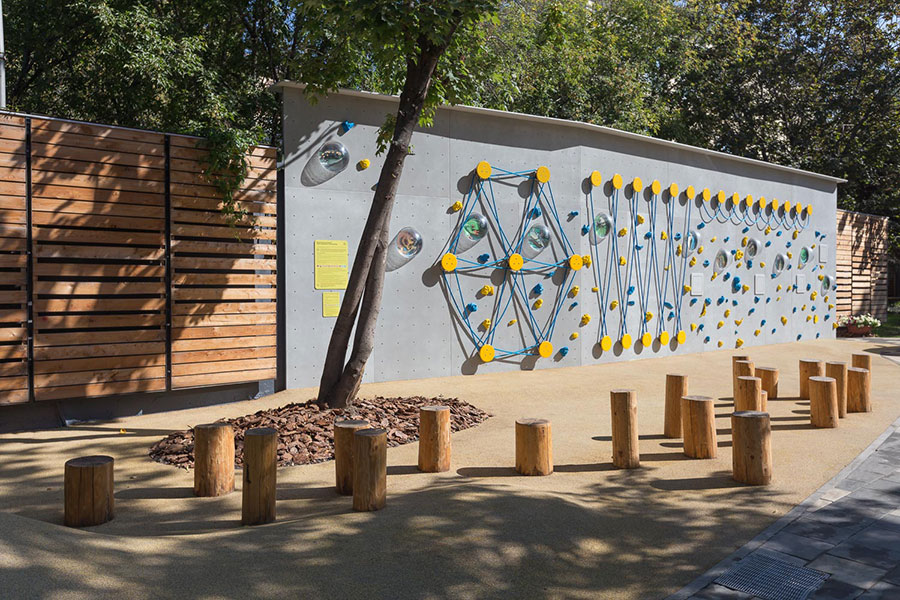 Located along this route are specially designed educational stands. 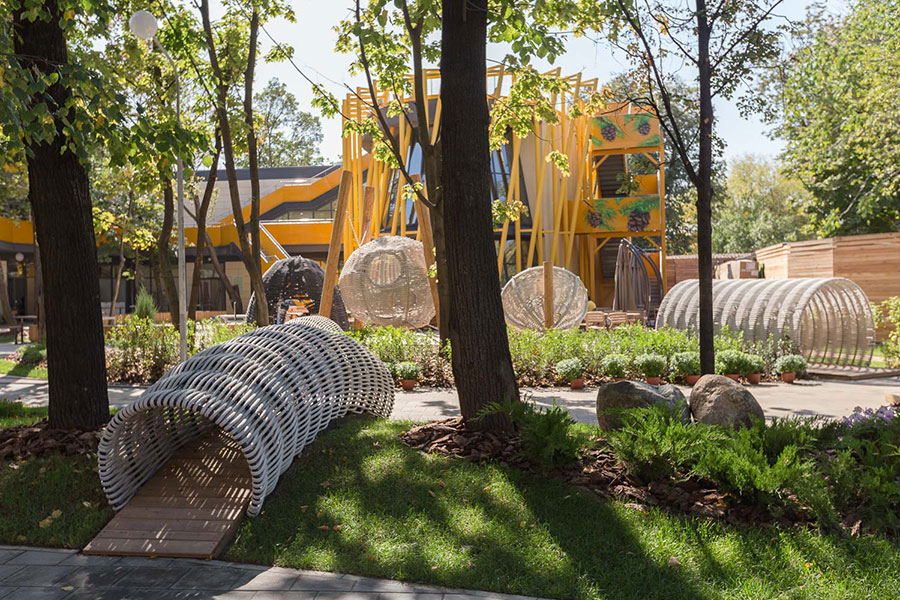 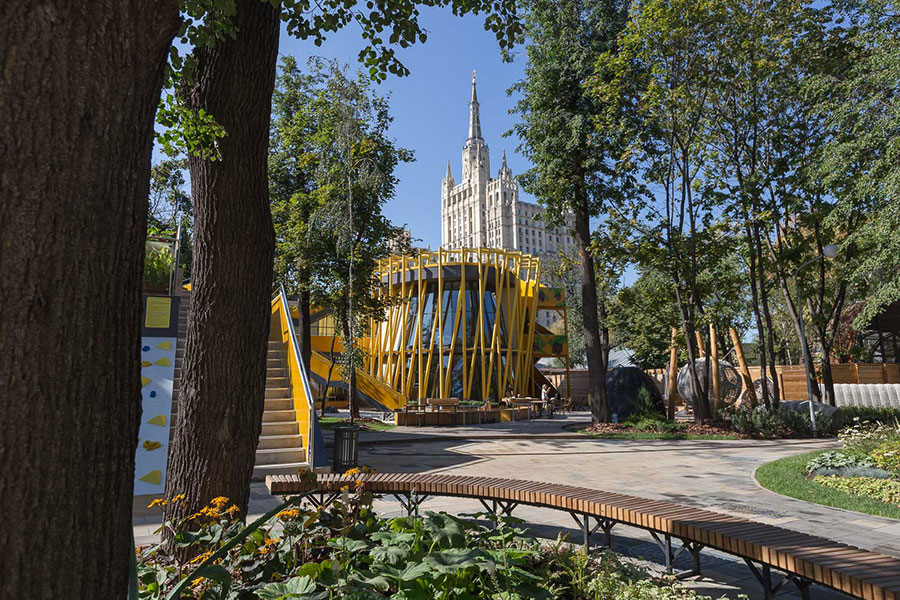 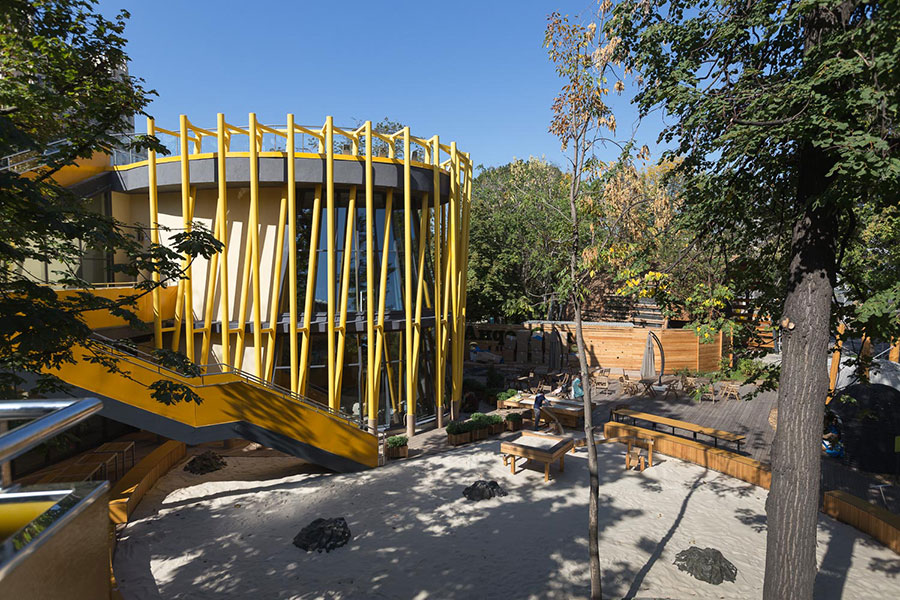 During the winter visitor programs at the zoo are somewhat curtailed, but that does not mean life there comes to a standstill. All species living at the zoo bear the cold, so they do not need to be transported. All the principal ideas of the new educational space are supported by design. The central pavilion is dyed yellow. All the other materials used for construction have their natural texture. 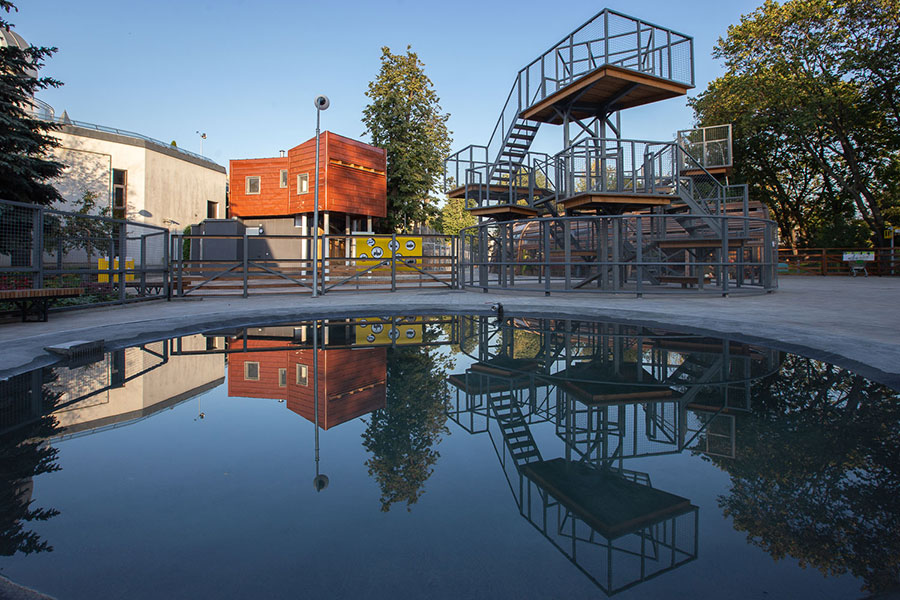