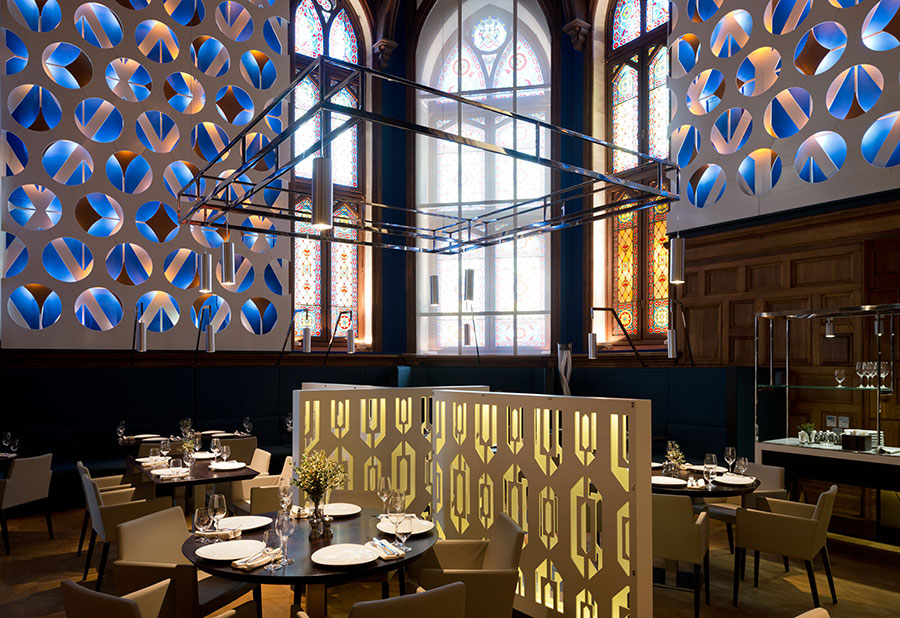 Since 1934, the CDL restaurant occupies reception rooms of the mansion on Povarskaya street in Moscow, the building dating back to 1887. Having served as a venue for freemasons gatherings before the Revolution of 1917, both the building and the restaurant are related to the contradictory history of the Soviet literati class, as in the 1930s the building was passed to the USSR Writers Union.
The main hall has been a restaurant for 80 years and new management of the CDL restaurant, together with “new Russian cuisine” pioneer Alexey Zimin were determined to respect the age-old tradition. The brief was to redesign the restaurant interior to clearly state its new era and to preserve all historical and listed elements. The result is a vibrant, bold design, which nonetheless respectfully accentuates original interior fragments. A new audience, made up of 25 to 45-year-olds from creative industries, was the main target group.

To redesign the interior while at the same time preserving the historical neo-gothic decor and creating a light, casual atmosphere that corresponds to the cuisine being served.
Since no scientific research for the purpose of the building restoration has been held so far, any major intervention could have caused a loss to the historic integrity of the building. However, the restaurant needed an urgent revamp before the lengthy research procedures could be finished.

It was decided to apply the methods and logic of an art-intervention by superimposing a new layer – which could be easily removed or changed – onto the old interior. It is meant to switch the attention of visitors and alter the ambience of the halls.

Decorative wall panels in the main hall brush away the atmosphere of a pompous pseudo-gothic interior, the pattern being based around almost childish interpretation of heraldic “golden shields on azure field”.
White panels perforated by a metric row of circles add another layer. Functionally varying, the circle is reproduced almost in every room – the fireplace hall has circle reflective lamps, at the entrance circles hide utility wires that could not be build into walls of the listed building. 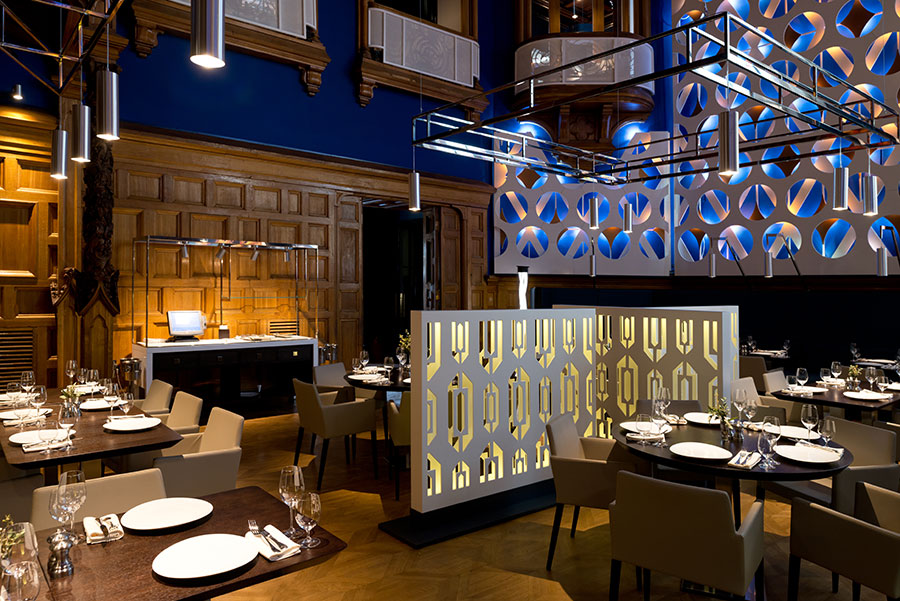 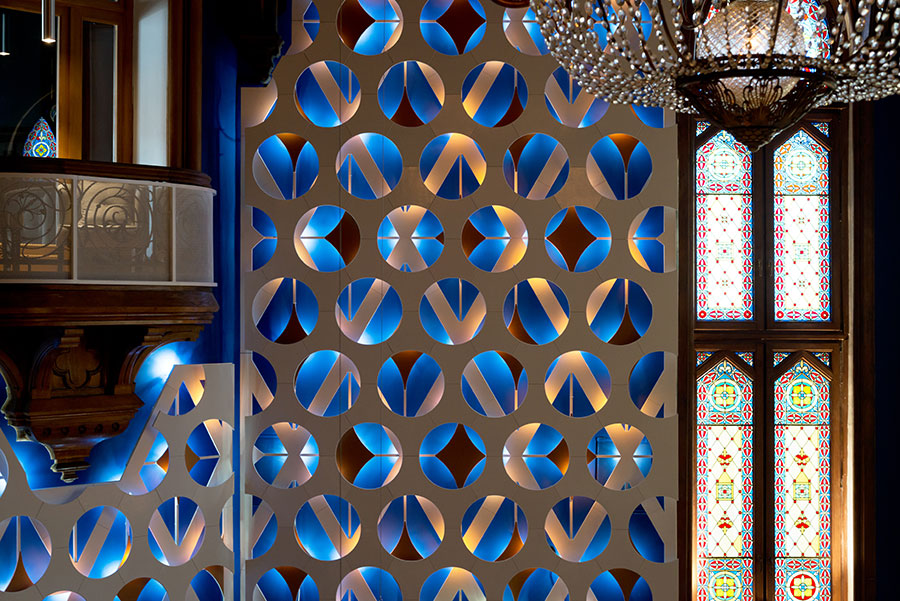 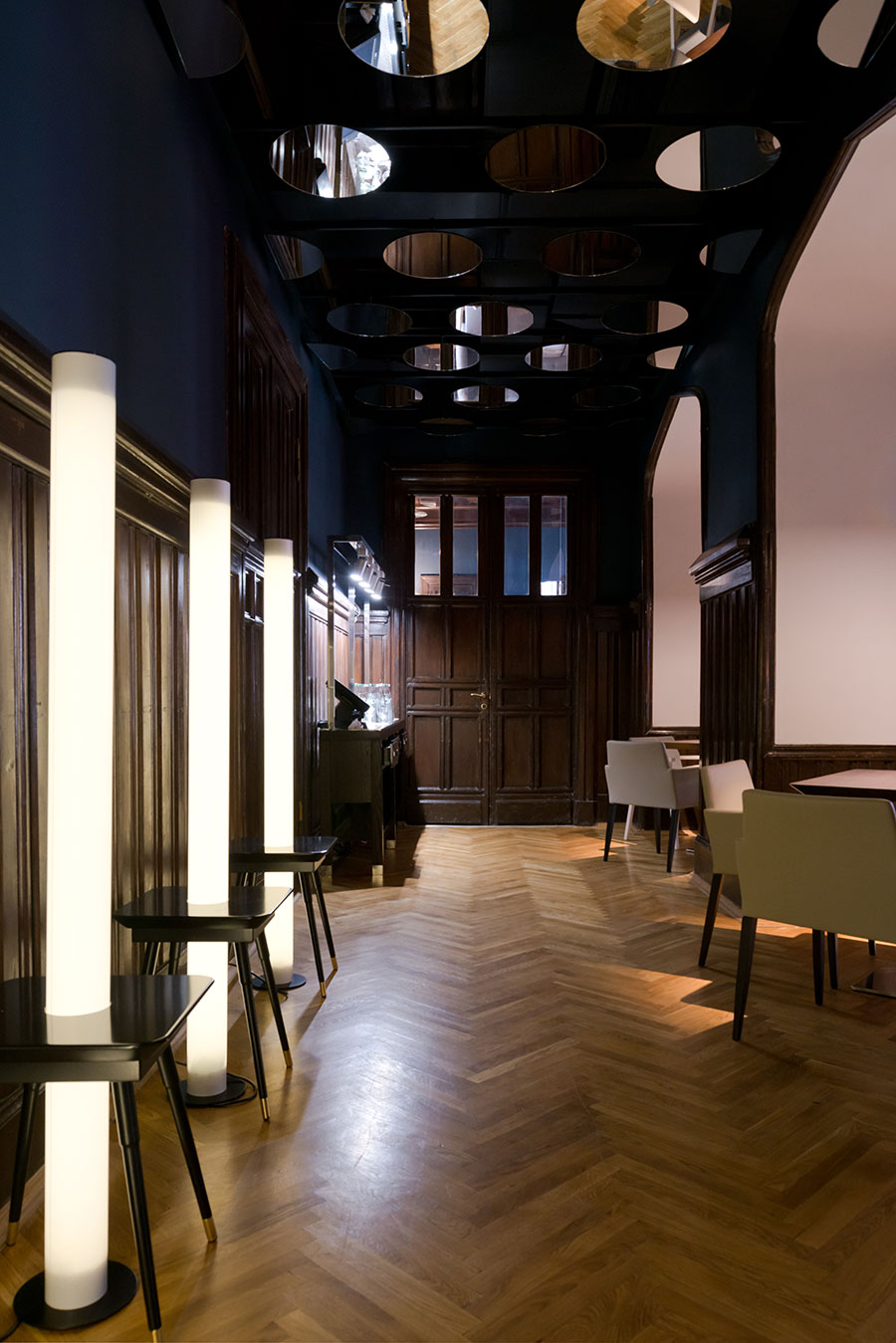 Partitions in the main hall and the rest of the furniture (except chairs) and lamps are produced specially according to the studio’s drawings. 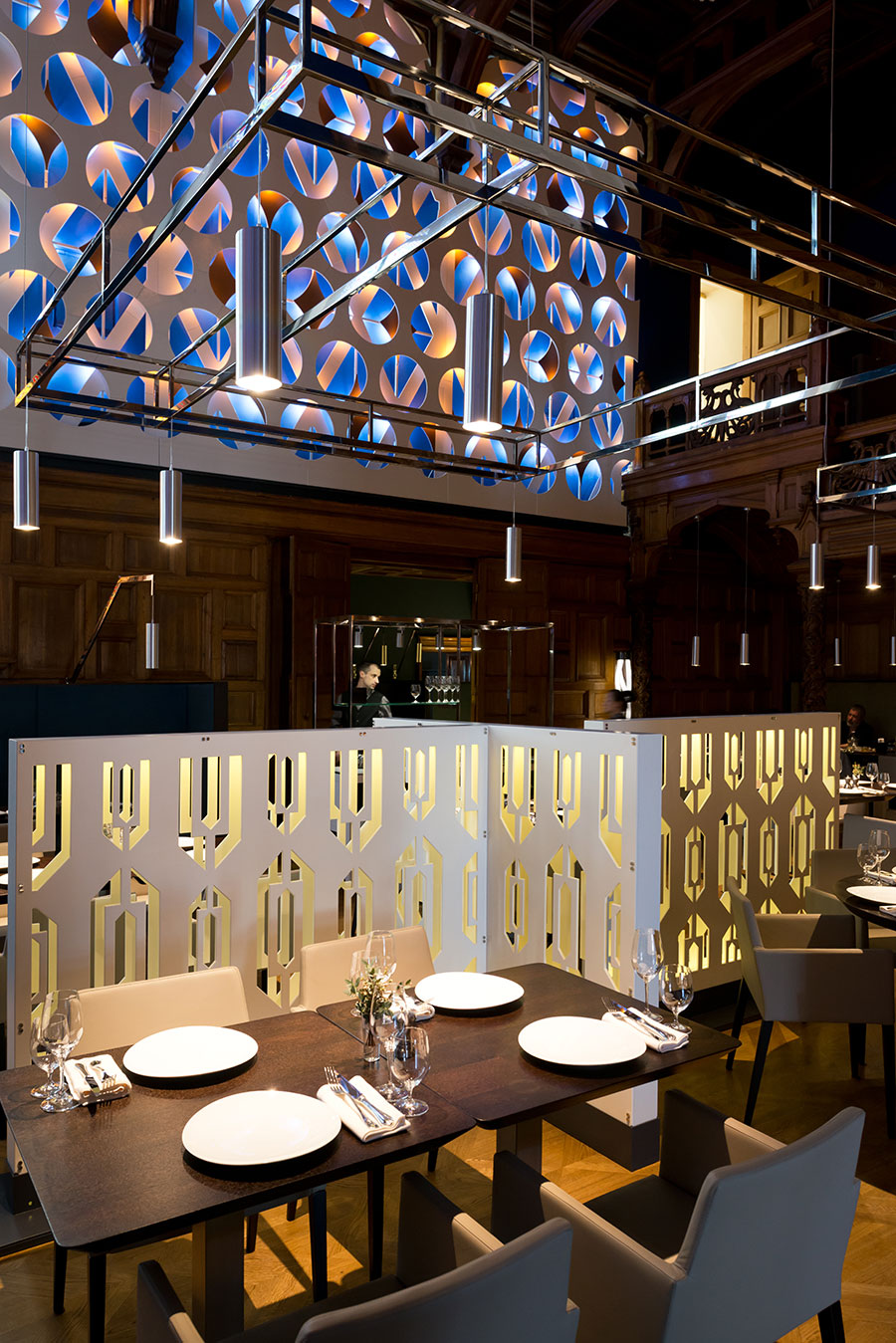 A portal leading to the main hall is created by back-lit frames. 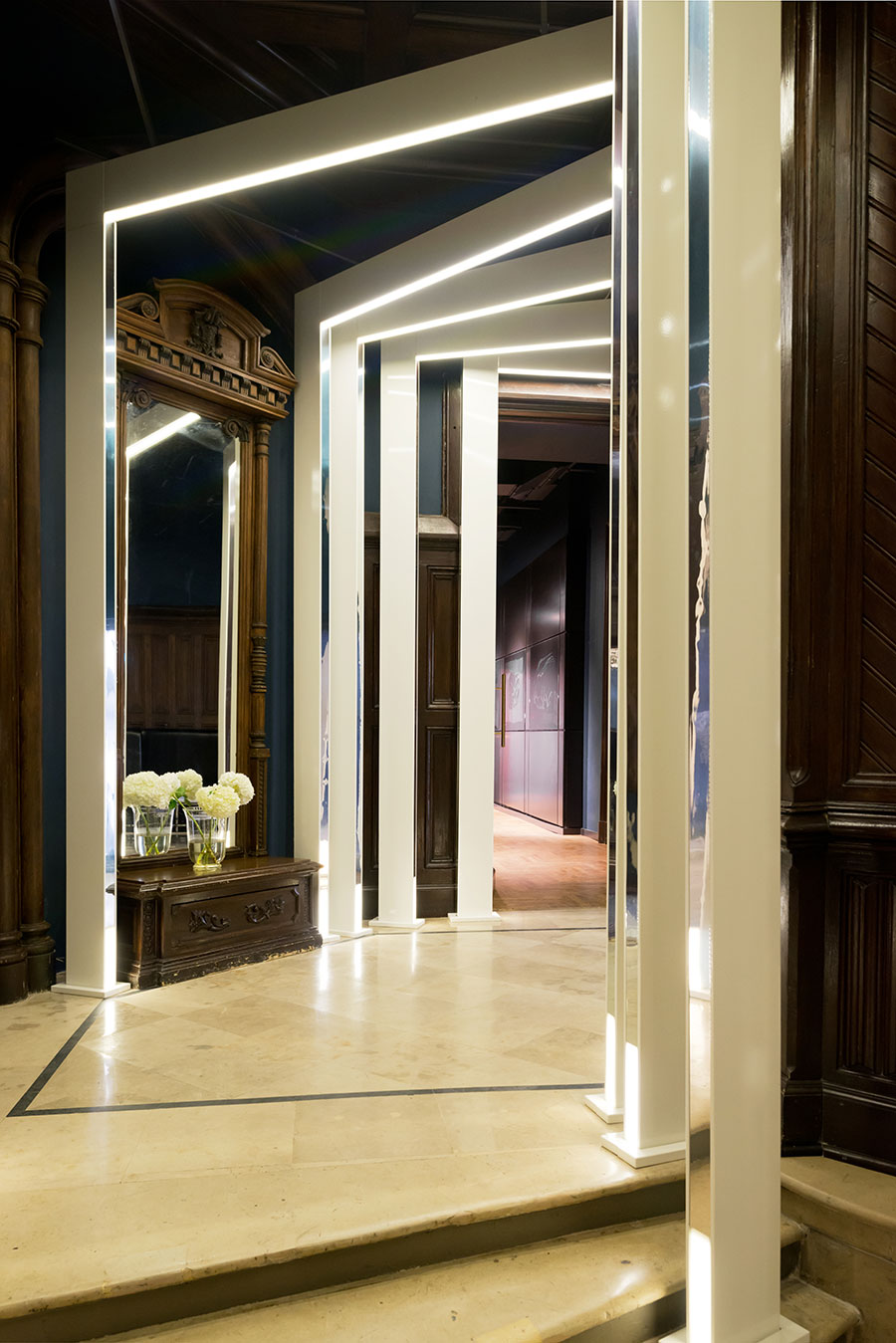 The staircase leading to the cloakroom and the patterned wallpaper match with main hall panels. 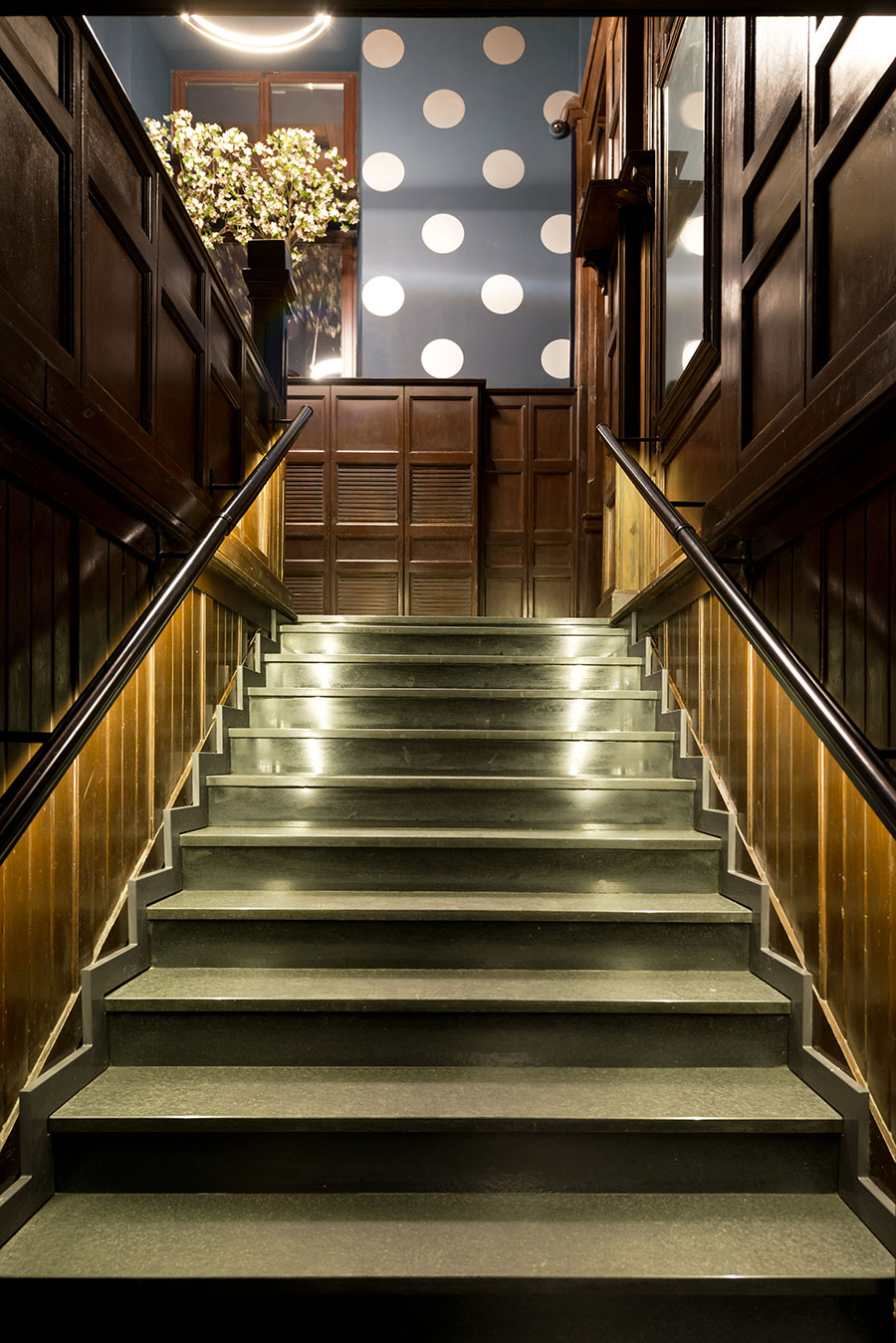 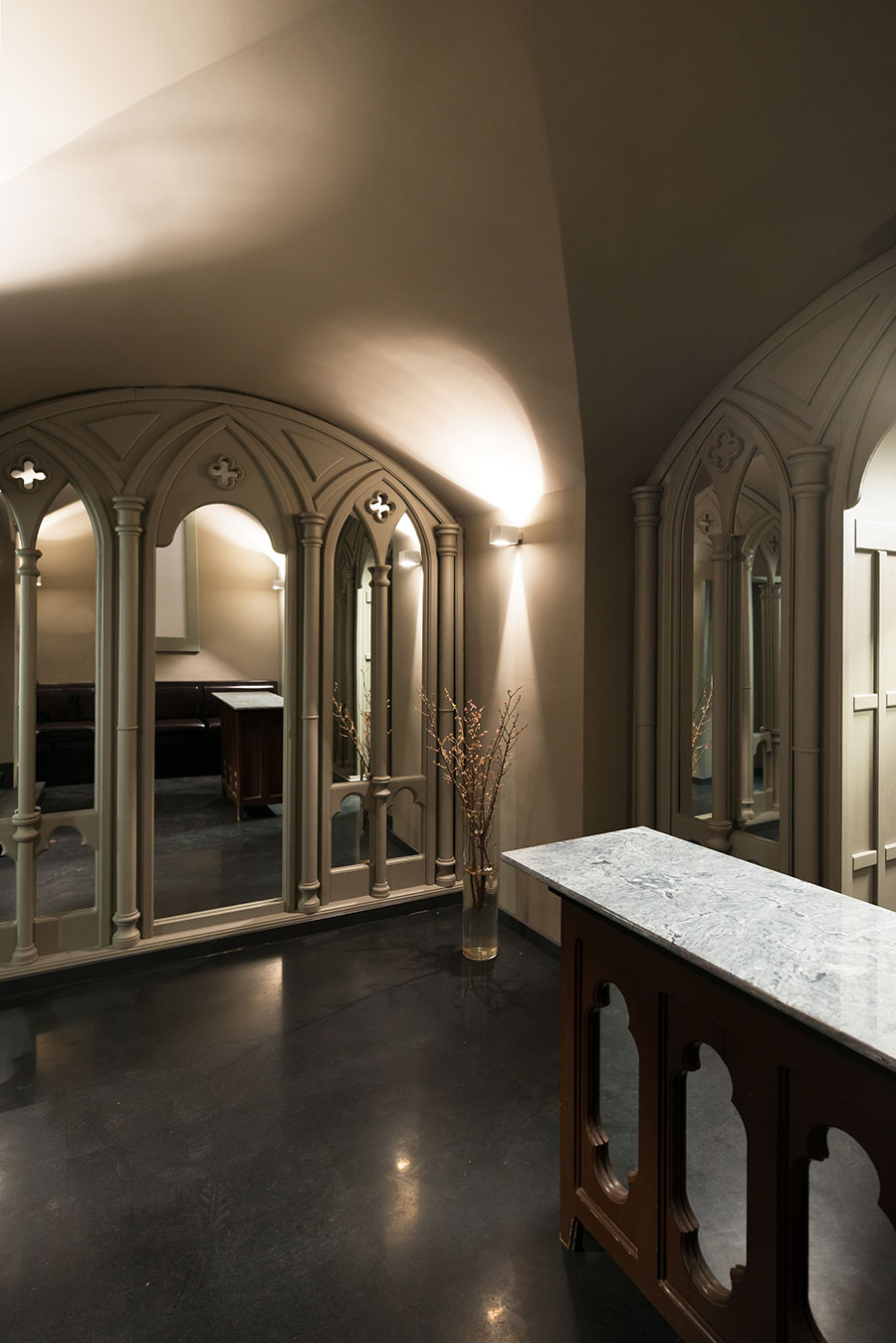 Bar
The rack occupies the entire wall becoming the main accent of the room. Glasses are lit with LED lights built into the mirrored shelves. 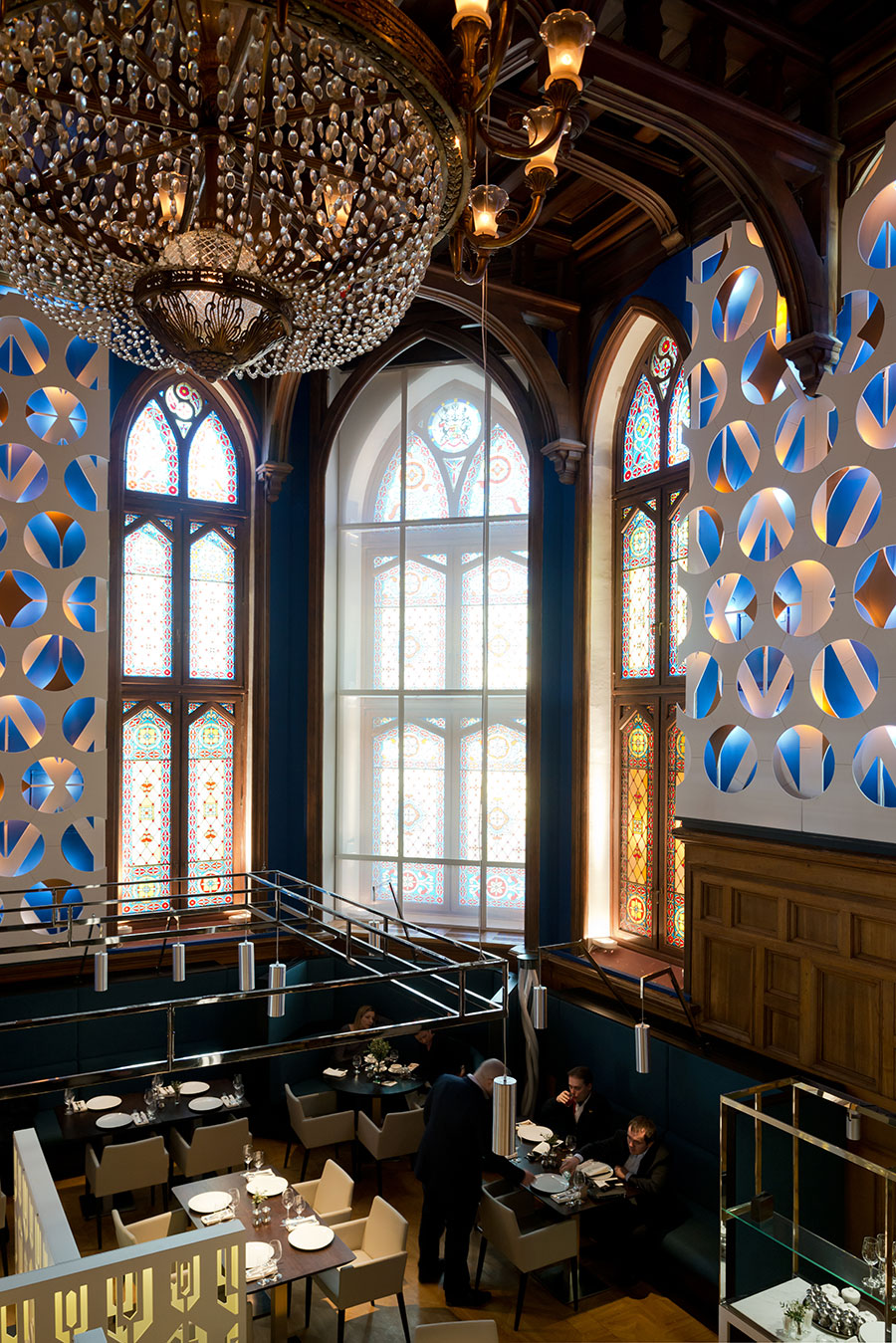 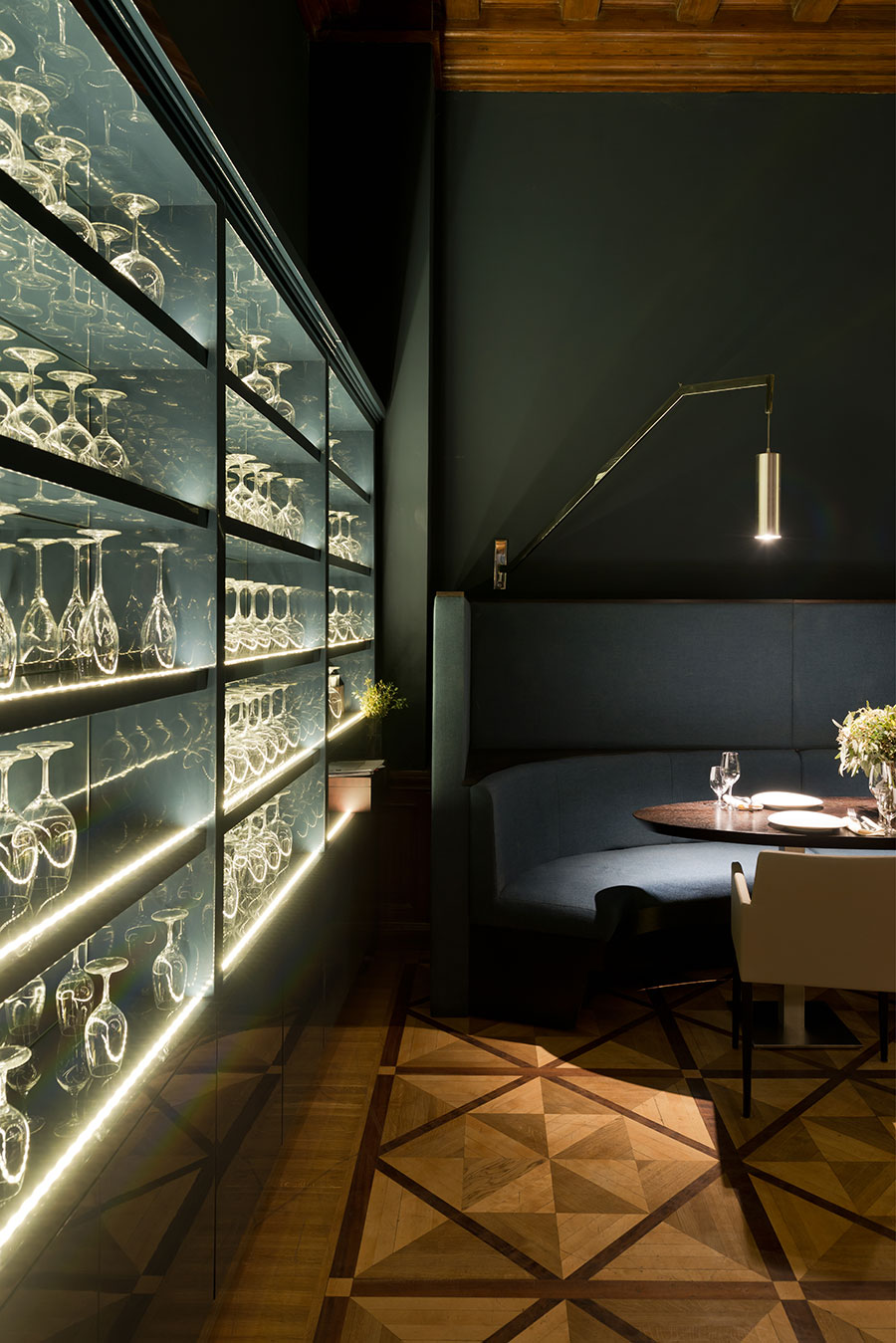 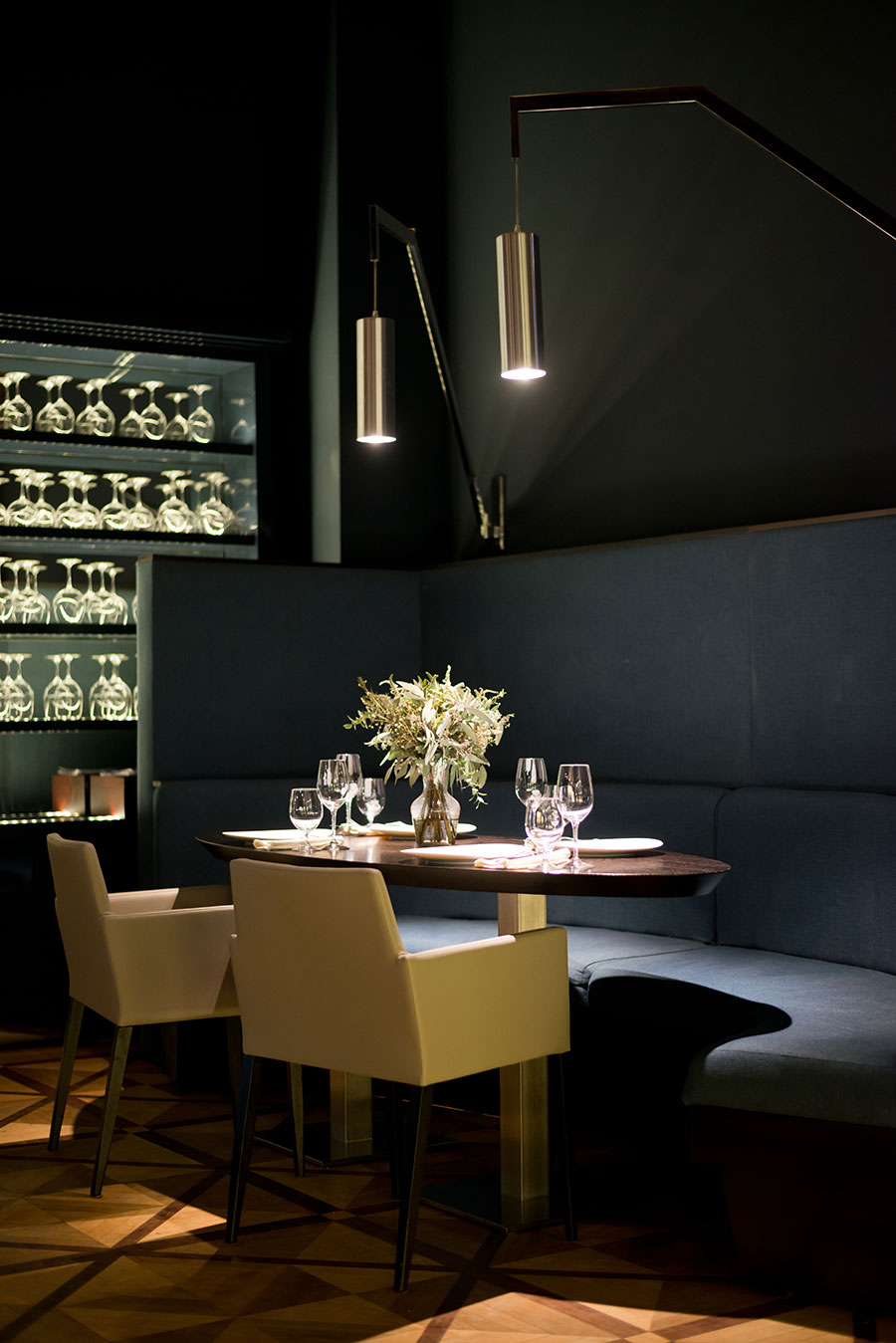 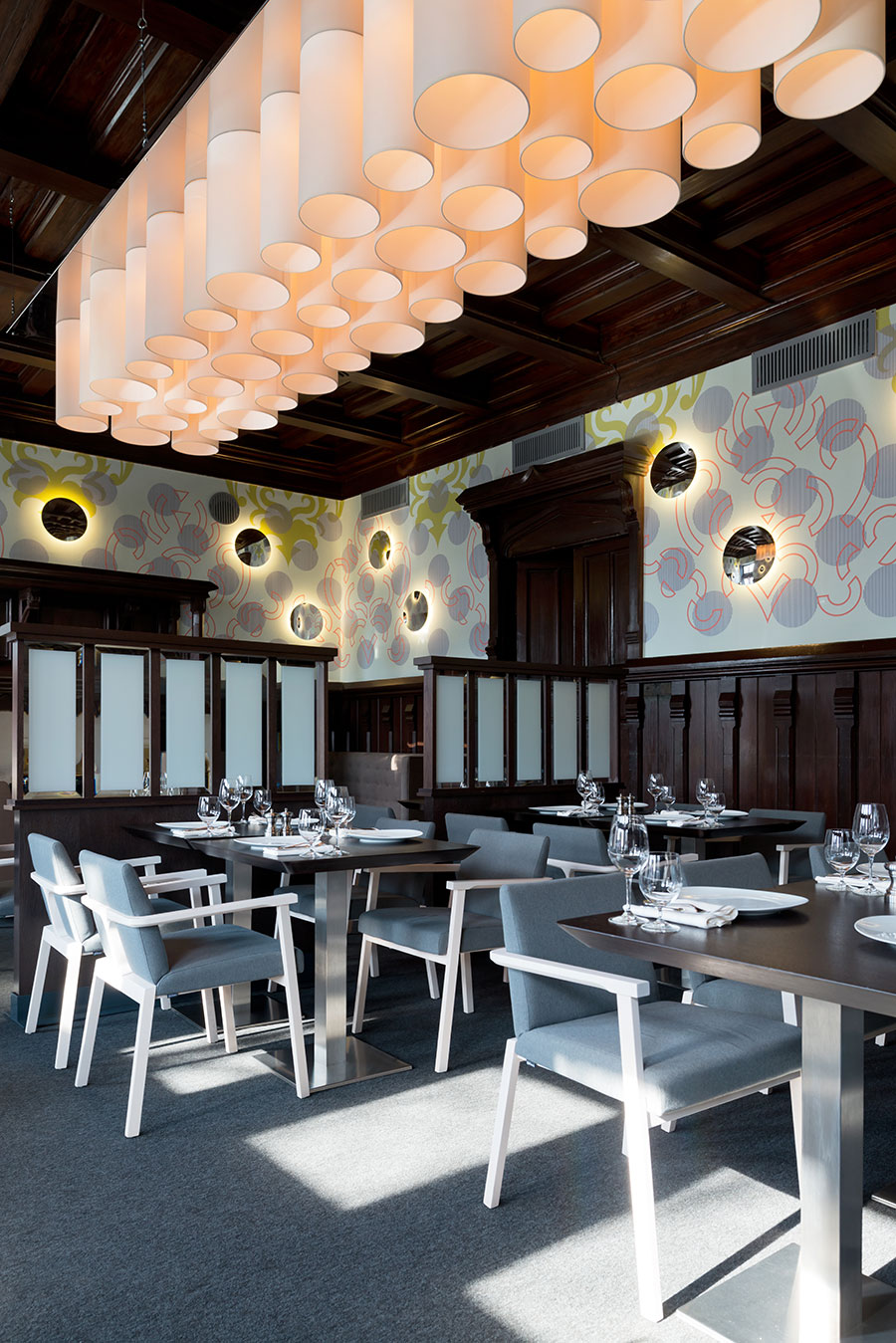 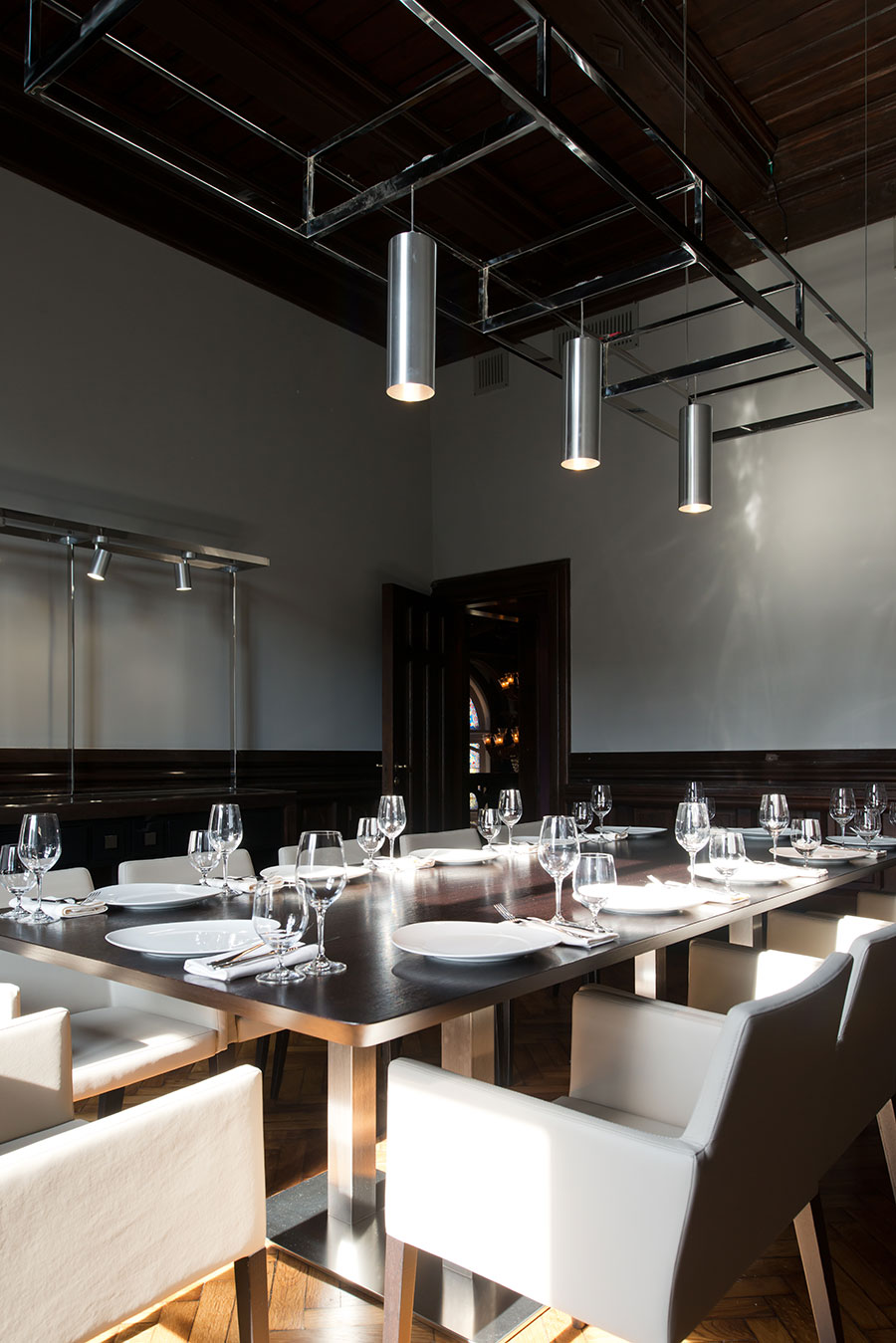