In 2015, Wowhaus moved to its new offices on the premises of the Artplay Center for Design and Architecture. Its design represents the coherent embodiment of the idea of architecture as a collective creative process built on constructive dialogue and direct communication within the team.

Conversion of attic space with a layout left over from the former tenants into an architectural office where staff can work comfortably and effectively communicate with each other.

Part of the old box-like structures used to demonstrate lighting fixtures were retained and redone to form open-ended cubes, and now house associates’ workspace as well as conference rooms, modeling studios, a kitchen and bathrooms. A large part of the overall space has been left undeveloped. Over time, functions and related formats will be found for each part of this space. The interior of the office is evolving under the influence of the processes and the people working in it.

By it’s very nature architecture is a collective endeavor. Many people are engaged in each project, and as such, the quality of the work is determined by the ease of exchanging information and reaching mutual understanding. Members of the team must have the opportunity and the place for meeting to discuss ideas and coordinate efforts. In furtherance of these functions, the Wowhaus office provides various forms of space for dialogue - from large and small conference rooms to an open amphitheater for larger gatherings.
Undeveloped spaces are also used for communication. In some instances, areas are simply furnished with tables for conducting operational meetings, while in others, several armchairs around a coffee table provide an informal setting for holding impromptu meetings. A separate, unoccupied part of the facility is used for yoga classes in the morning, and as an employee break room in the evening. 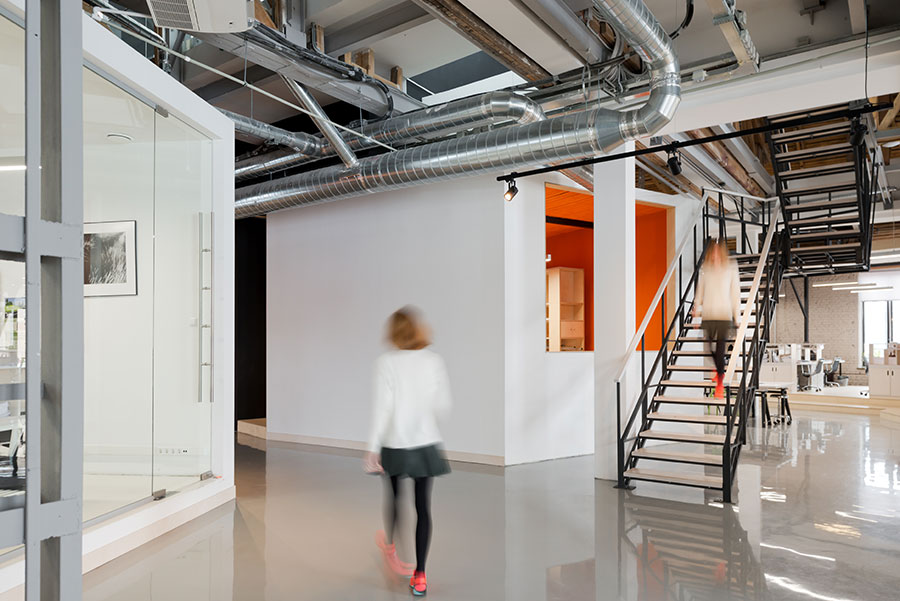 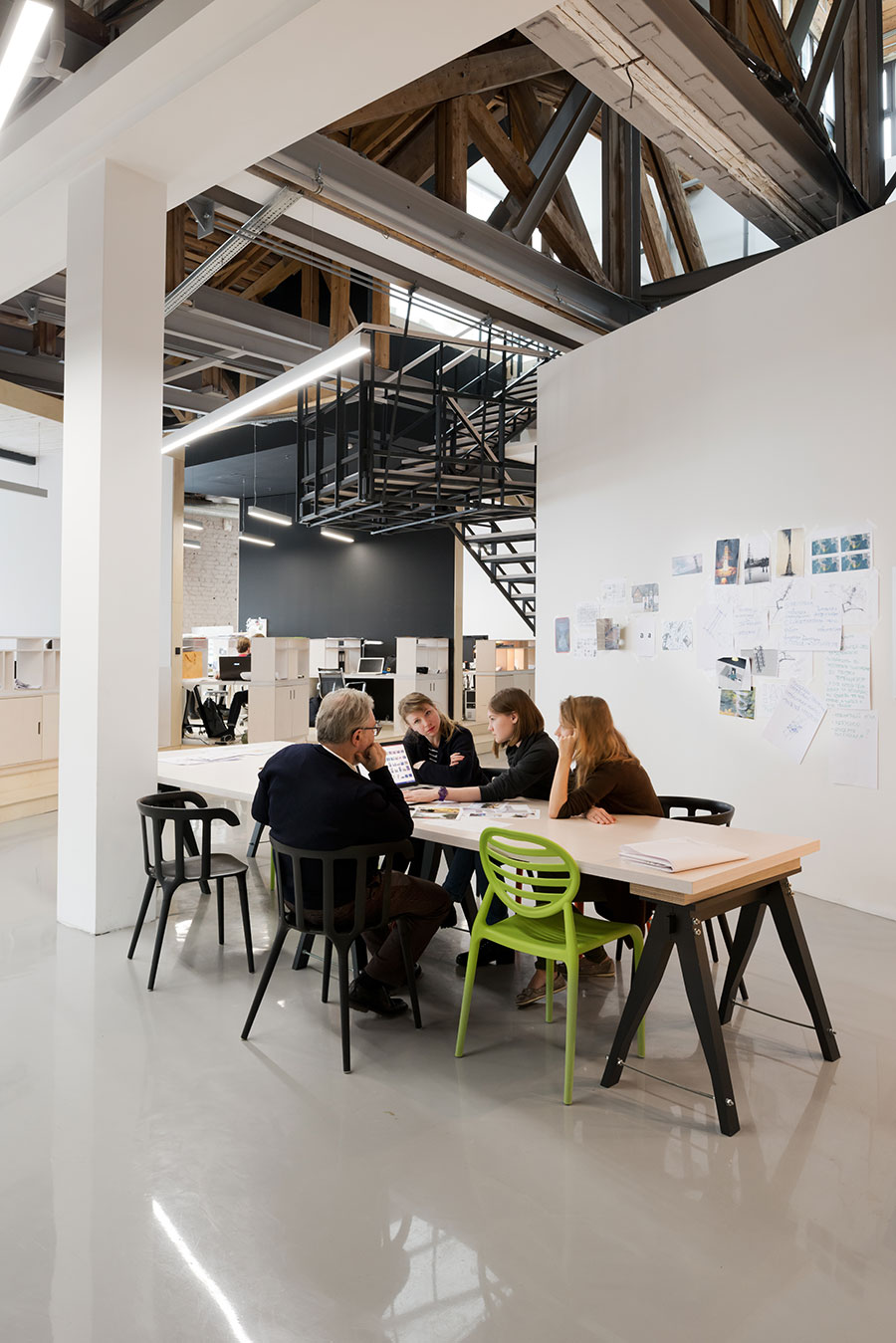 Adapted for an office, the attic space had its own positive and negative characteristics - pros and cons. Among the pros: high ceilings, impressive designing around wooden trusses supporting the roof, and brick walls with large windows overlooking the railway. Among the cons: poor insulation of the old roof calling for extensive forced ventilation, and noise from the very same adjacent railway. Work on the interior entailed accentuating the space’s positive aspects while employing various engineering, construction, and design techniques to combat the negative ones. Box-like constructions - a vestige of the previous tenant’s showroom lighting displays - have been converted into boxes of various shapes and sizes. Their walls - as well as office furniture - are made from veneer-clad plywood. 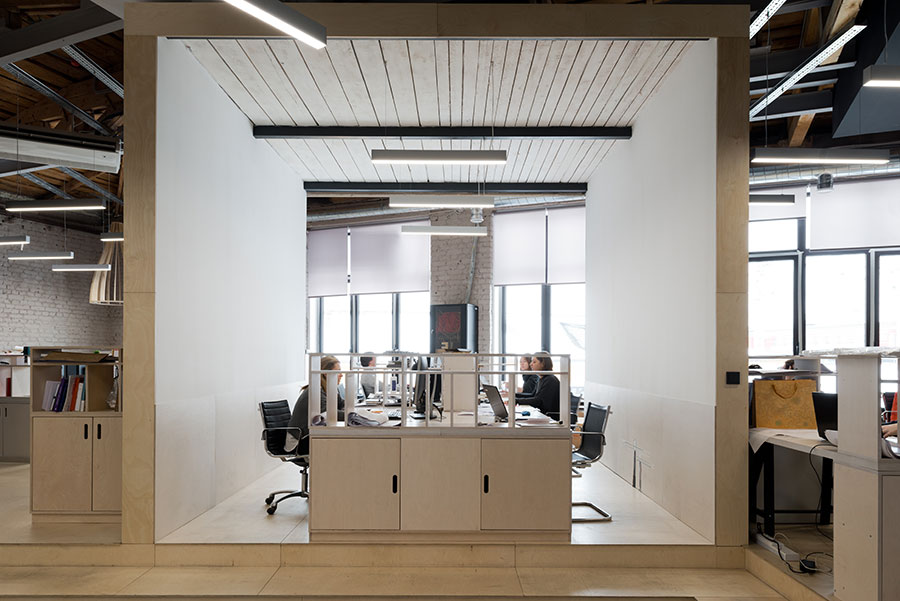 The degree of openness and wall materials vary depending on the function of the space. Boxes used for conference rooms or managers’ offices and engineering facilities are closed off from the central hall and corridor by means of seamless glass paneling. While surrounded by walls, technical areas such as the modeling and printer rooms as well as the kitchen have interior door and window openings. As such, the entire office is laid out to plain view, allowing it to be perceived as a single, unified space. 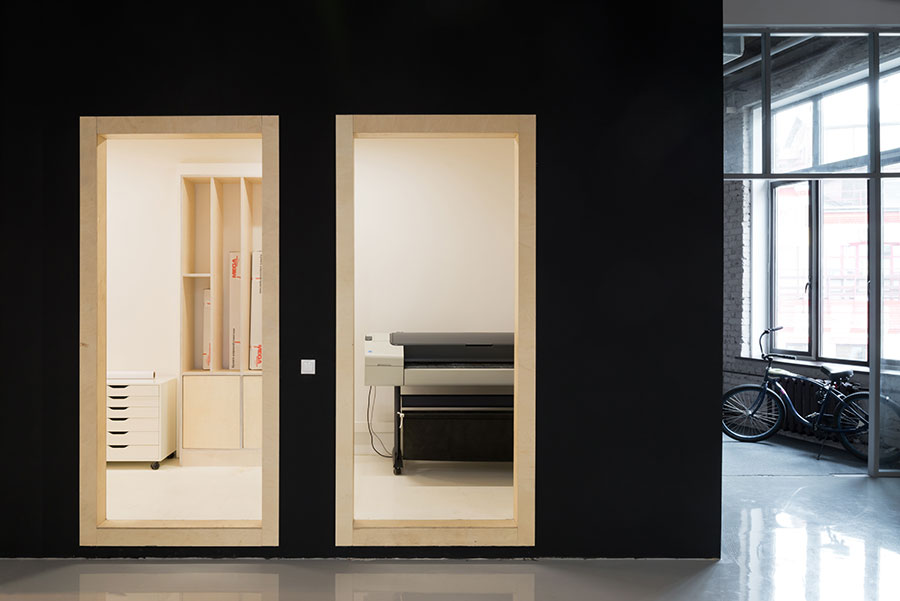 ВAttic height allowed for the introduction of a mezzanine under the pitched roof. Two staircases lead up to this space. One, located in the center of the office, has an irregular structure, and being clearly visible from all vantage points, serves as a key interior design accent. 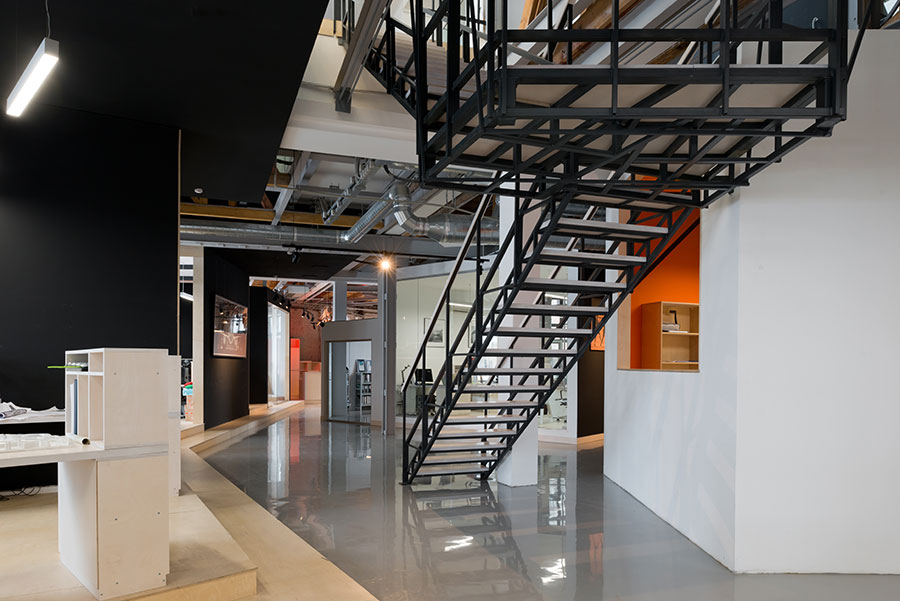 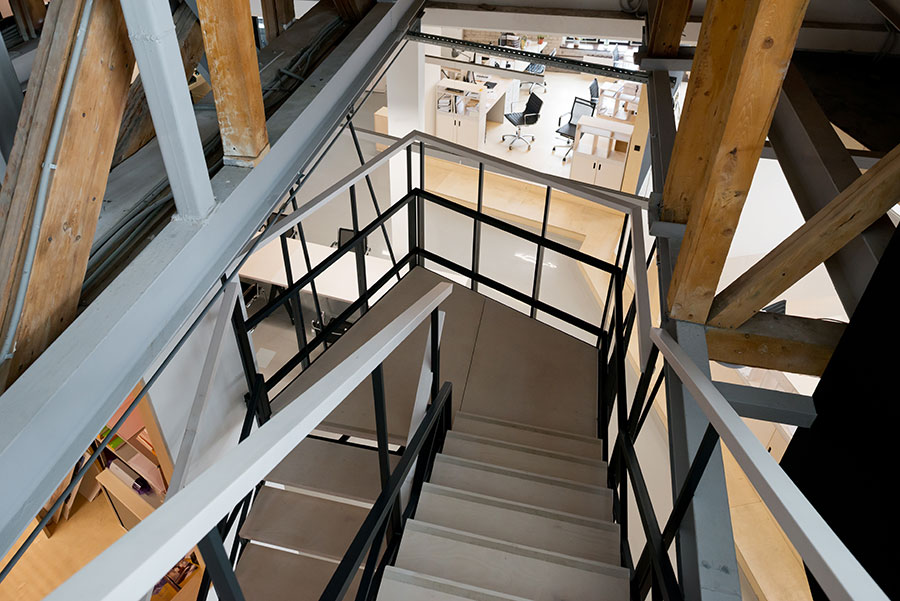 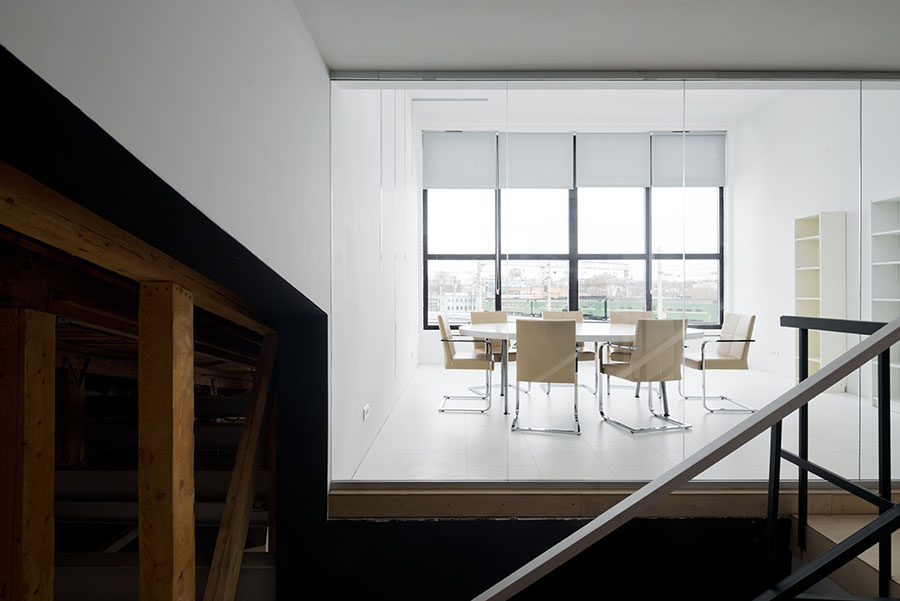 The interplay of the boxes and open spaces may be compared to urban development involving alternating houses, squares and alleys. Or to a theater hall where an ancient Greek stair-step amphitheater design has been combined with traditional European mezzanine theater lodges. 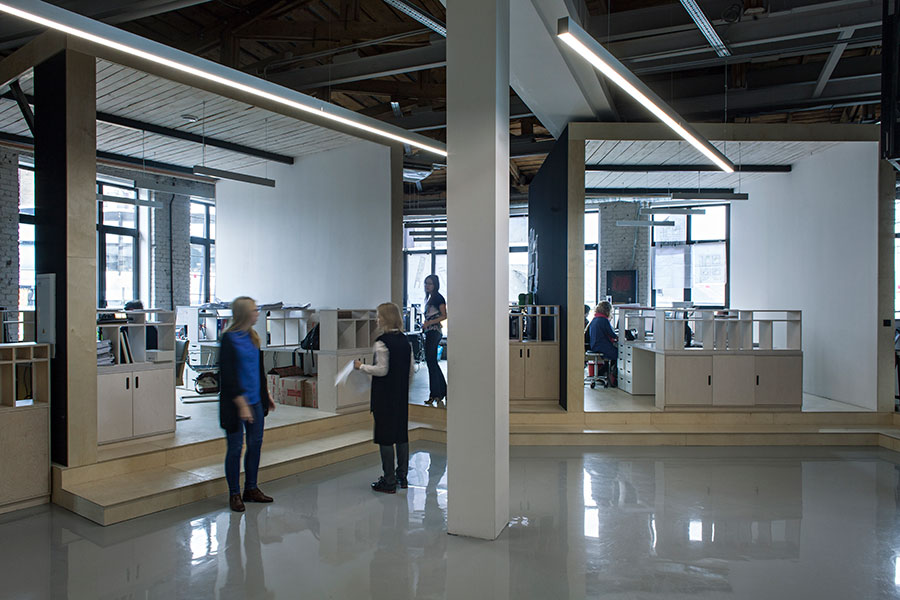 The second staircase to the upper floor is hidden out of view further back in the office behind the kitchen and a spacious dining area. The staircase itself combines with amphitheater-like steps, high and wide enough to accommodate gatherings of up to 30 people to discuss a project or an important event for the bureau. 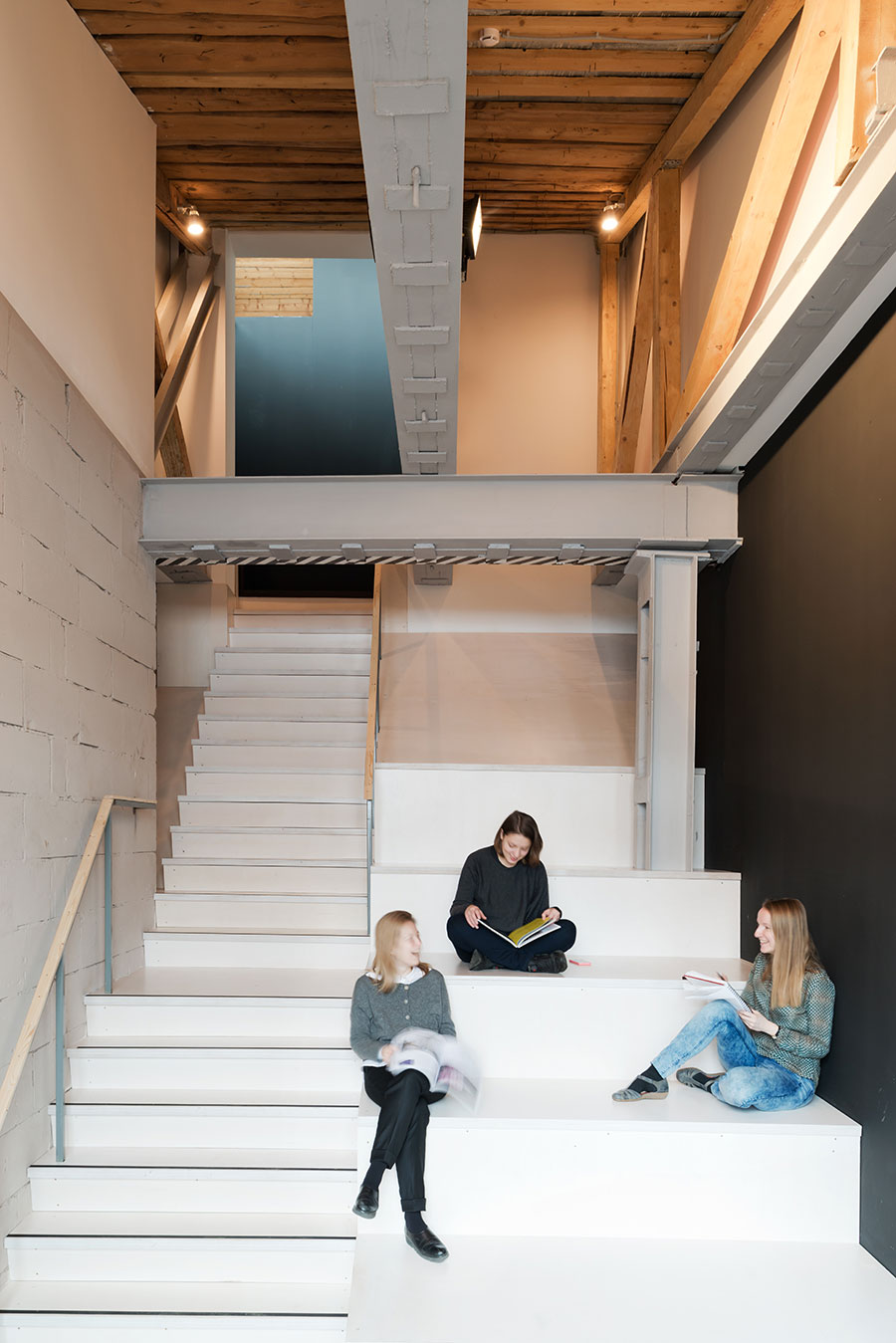 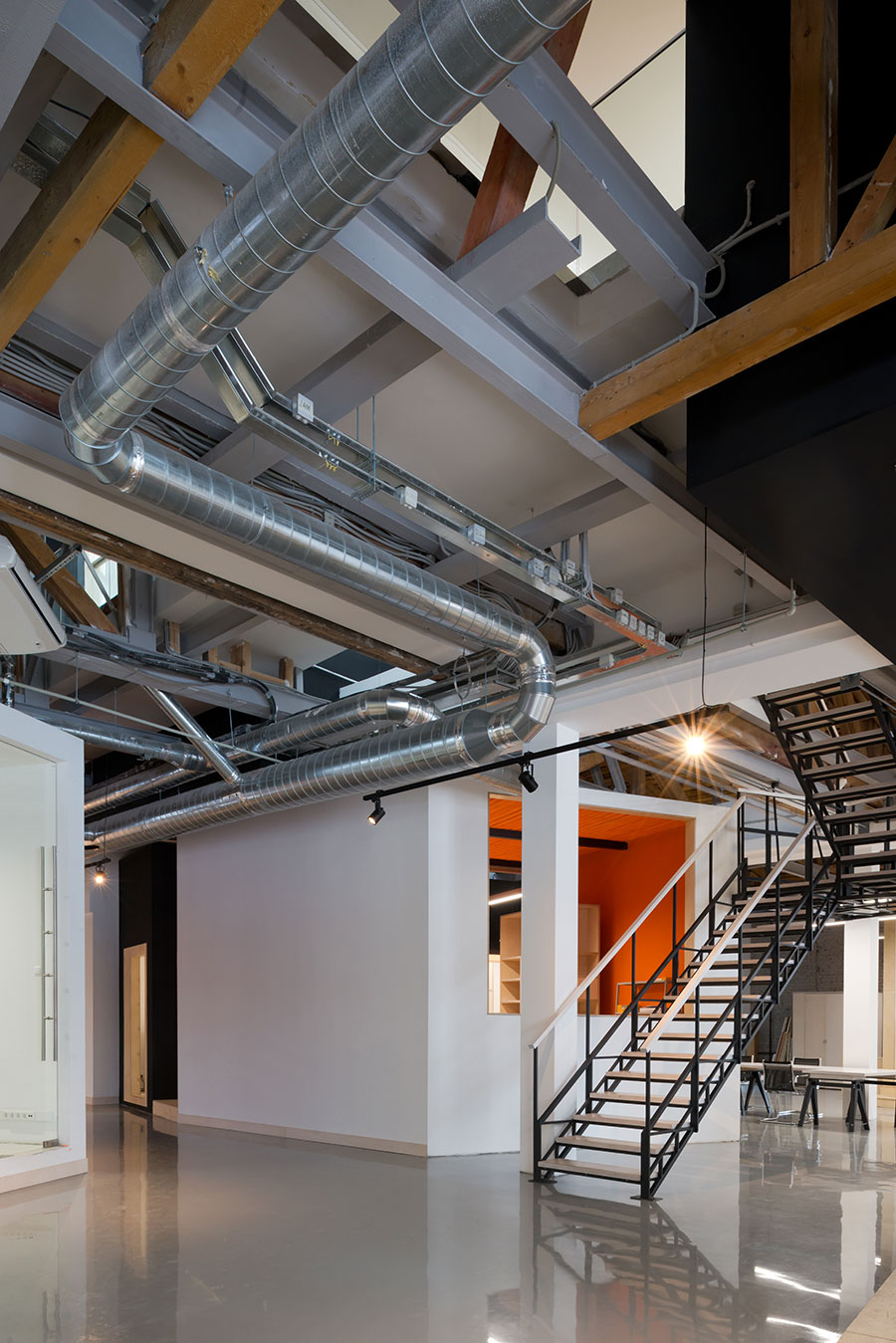 Some of the boxes, mainly those running along the street-facing side of the office, are set up on raised platforms 30 cm in height. Electrical wiring tucked away underneath allows for easy delivery of power to any point in the office, as well as any adjustments needed based on the type and and number of associates working within the same box. 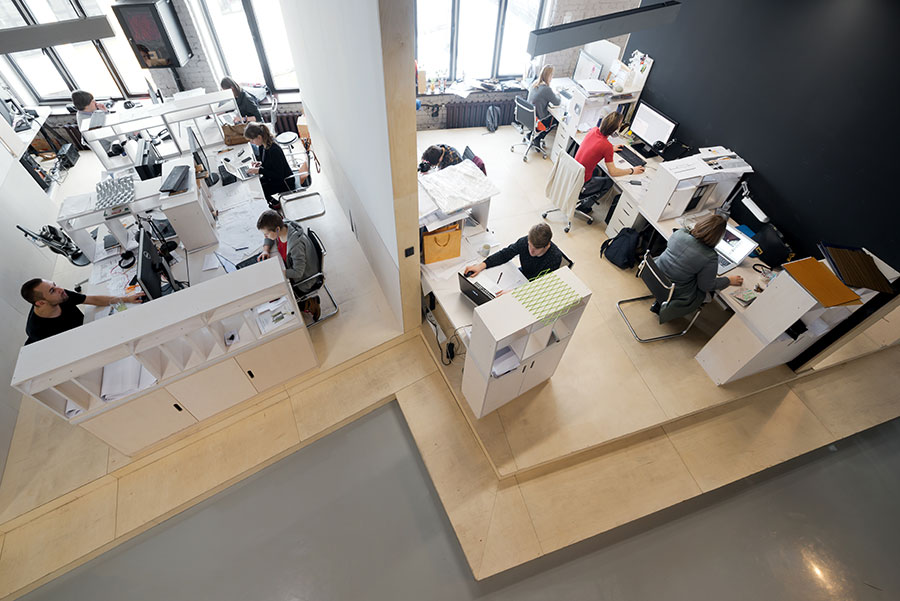 The interior uses a limited number of materials which blend together to achieve the feeling of the unity for an interior space comprised of variously shaped elements. In addition to original brick, metal and solid wood, veneer - either natural or bleached - is used along with glass for new box construction and partitions. 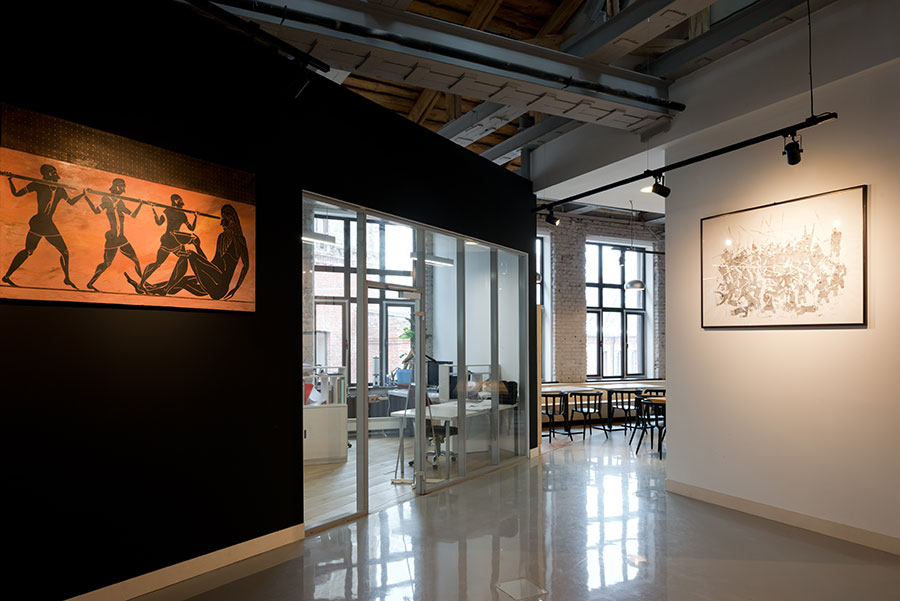 Uniquely designed office furniture was manufactured from veneer. The coloring of the veneer itself became the common denominator providing the background for the introduction of newer elements using different materials, or components accented by virtue of their color. 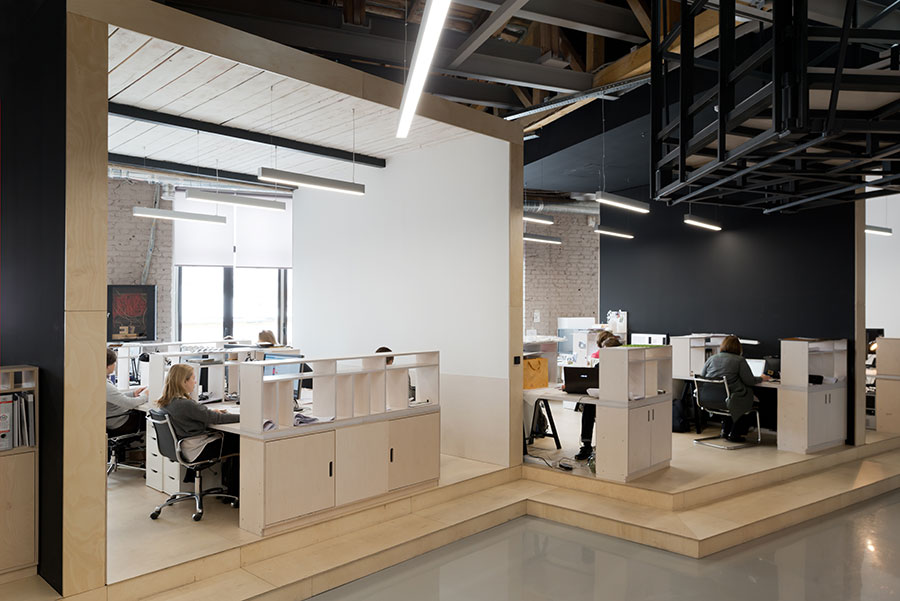 One gets a quite cheerful impression of the interior thanks to an abundance of natural light. The new office elements primarily use white, black and gray to avoid creating a cacophony of color. The only exception - the walls of the modeling studio located in the center of the office who bright orange color helps visitors more easily find their way around the office. 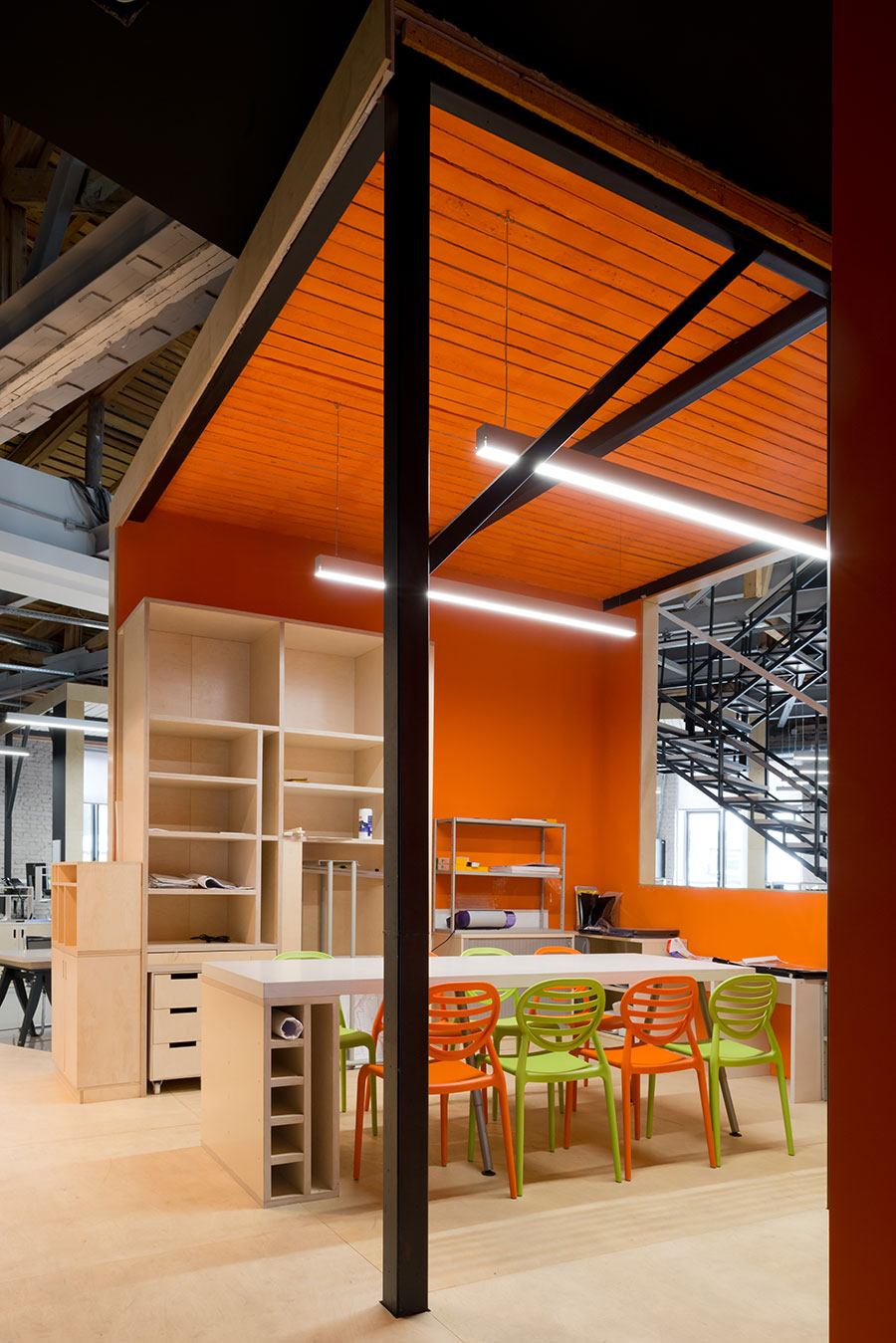 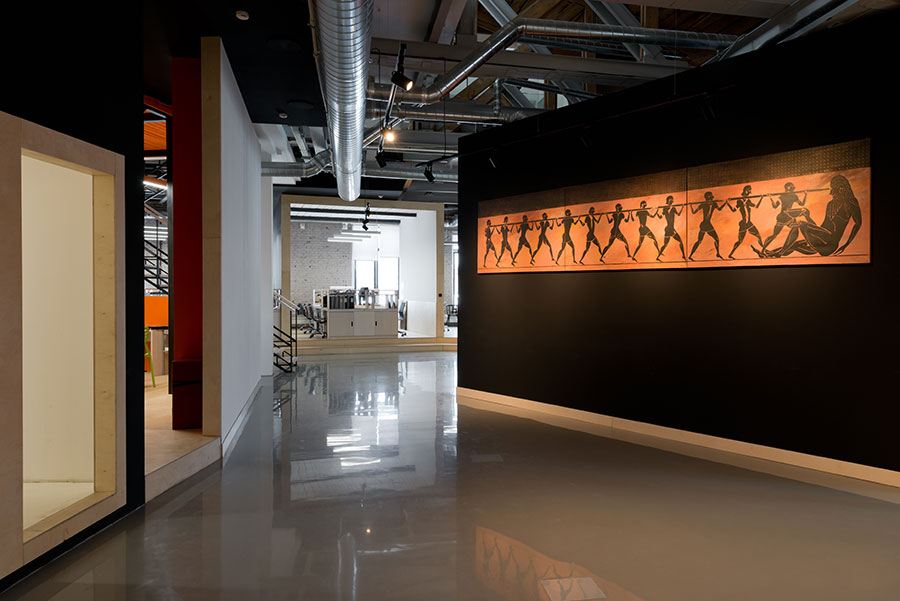