The Regent by Rico restaurant is located in the former wine bar of the Arbat Hotel, which was once closed to the general public. We encountered an outstanding hall of the 1960s with a rather bad renovation common in the 90s. Therefore, we decided to restore the restaurant's atmosphere of the 1960s, a kind of "imaginary-future-in-the-past".

To renew the restaurant hall with a vibrant architectural idea

To rid the hall of the 90s renovation relics, preserve and emphasize the architectural elements characteristic of the 60s, give the space of the hall more eclecticism with reflective surfaces and curved lines 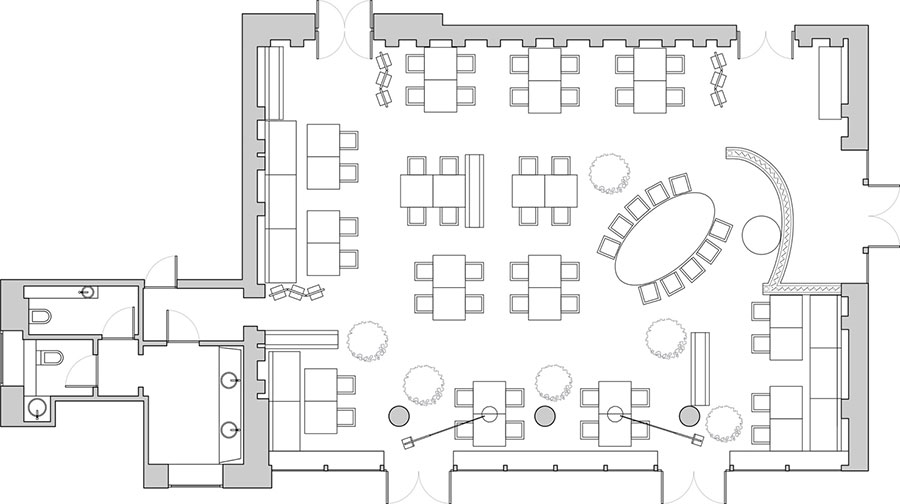 The visitor enters the hall from the hotel lobby which we visually separated from other spaces of the hotel with a bespoke curved mirror screen. 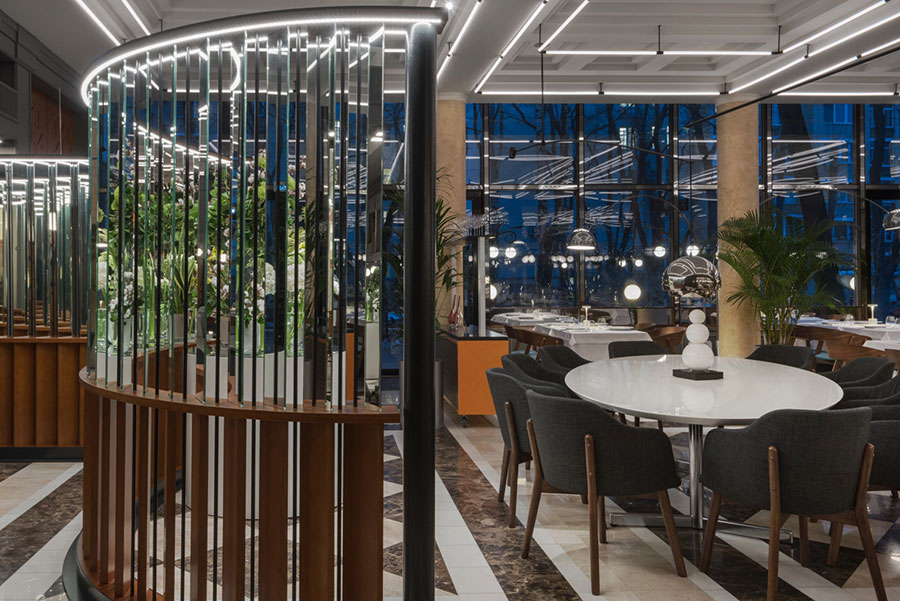 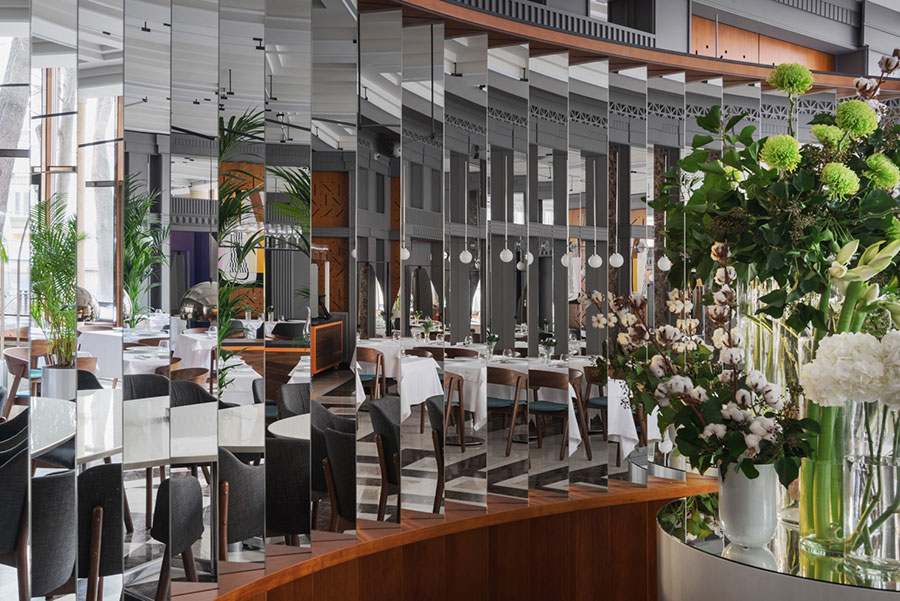 On the other side it is framed by a large oval table, ideal for a large group: it can seat an almost infinite number of guests, and all of them will be able to converse at ease. 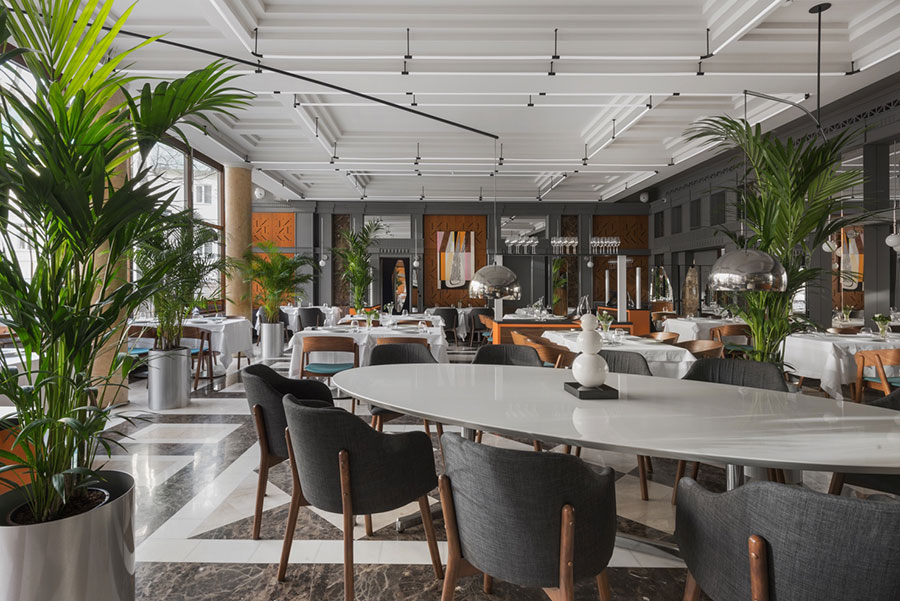 To make the space "work" in a new way, the wall panels were also diversified with numerous mirrored surfaces, as well as added wooden inserts made of cherry veneer with a 70s style pattern. The marble floor was completely preserved and the wooden wall panels were painted in dense grey. 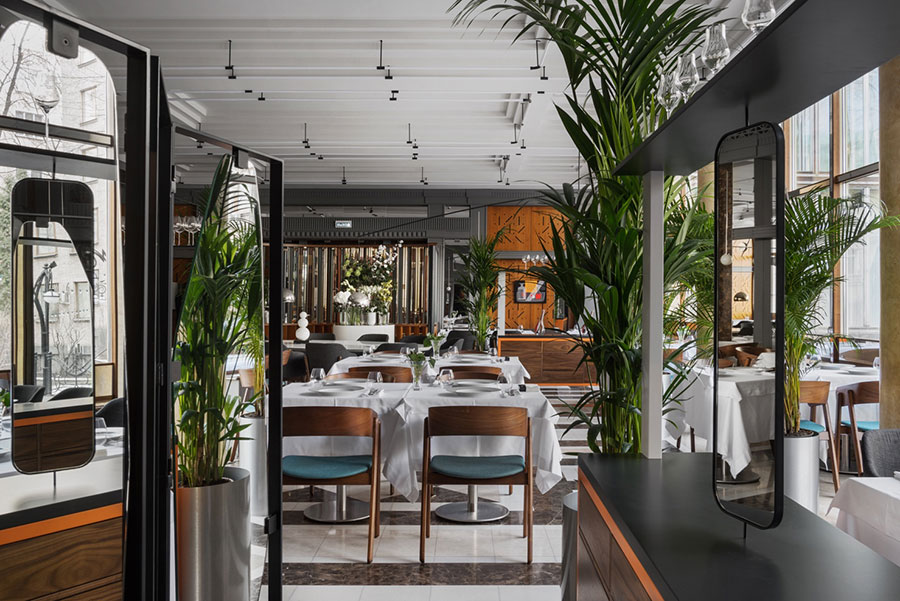 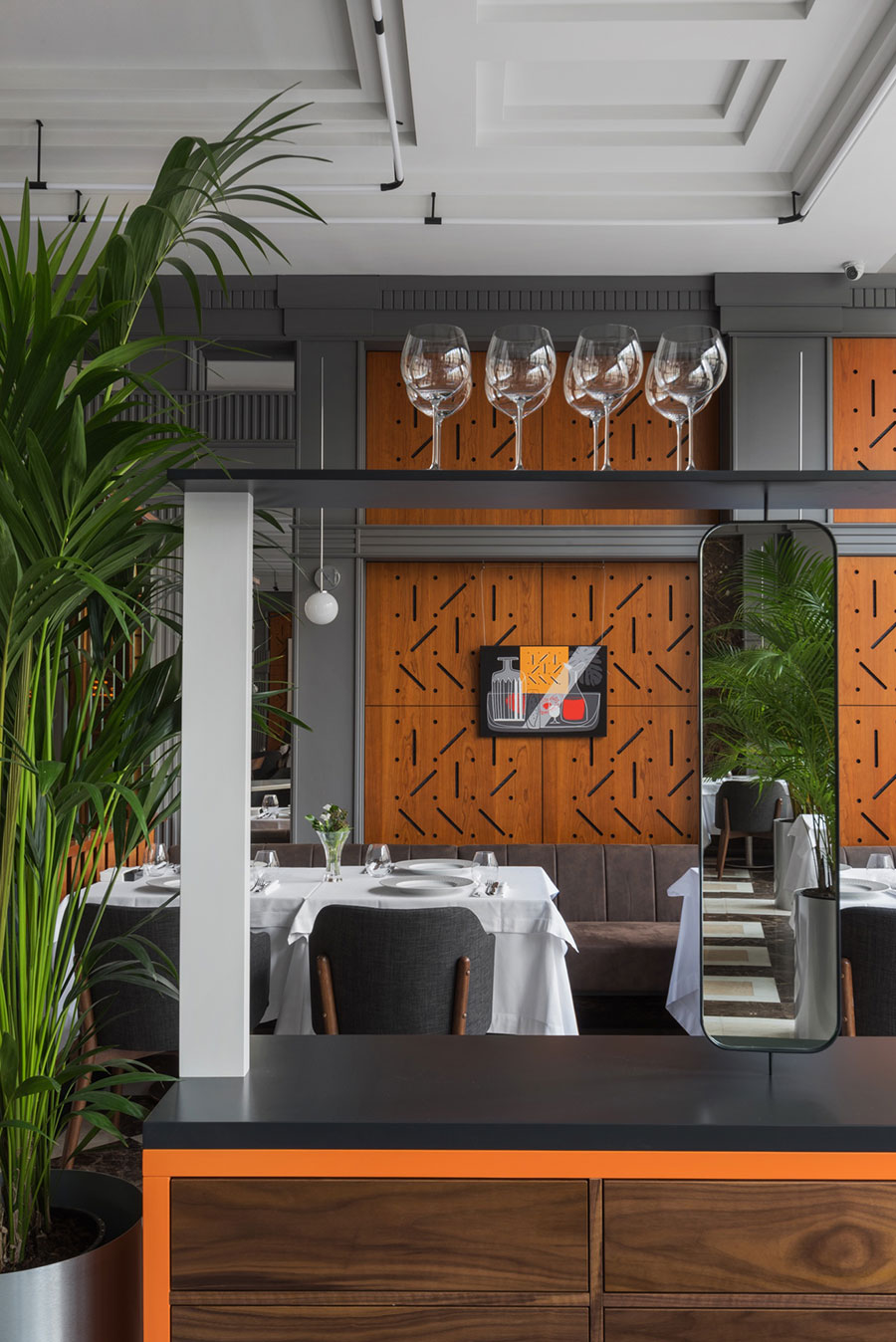 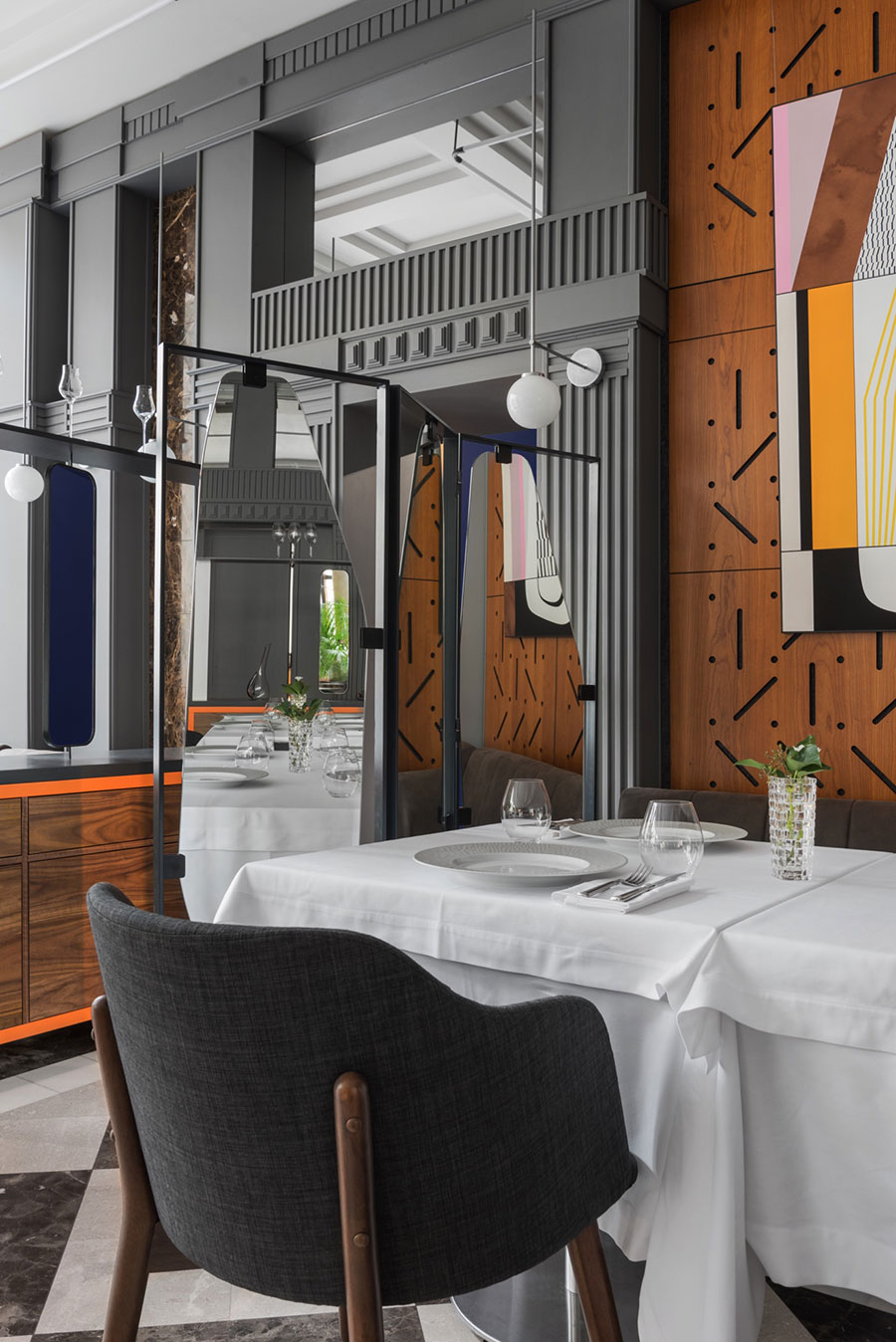 There is a lot of natural light in the hall: one of the walls, one that opens to the patio, is all glass, so on a sunny day the border between the room and the street is almost erased. This effect is enhanced by palm trees that were brought from Holland. In winter, palm trees create the opposite effect: in contrast to the cold outside the window, they give the restaurant more "warmth", creating an almost orchard-like feeling. The lighting of the hall was reinvented: the geometric light pattern on the ceiling changed the space dramatically. Incidentally, both geometric wall lamps and table lamps were produced in Russia. 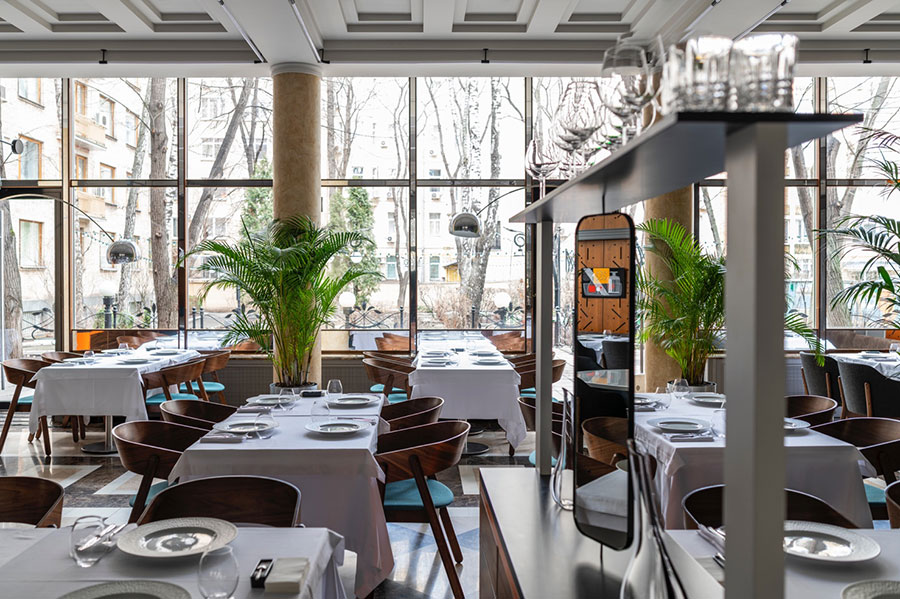 All furniture — from the entrance screen to the waiter stations — was made according to bespoke designs, even posters for the restaurant were created by Dmitry Likin. Bright colours were used to soften the lavish ceremonial feel and give the space lightness. Orange and blue details can be noticed in the furniture, bathrooms, and even in the poster. 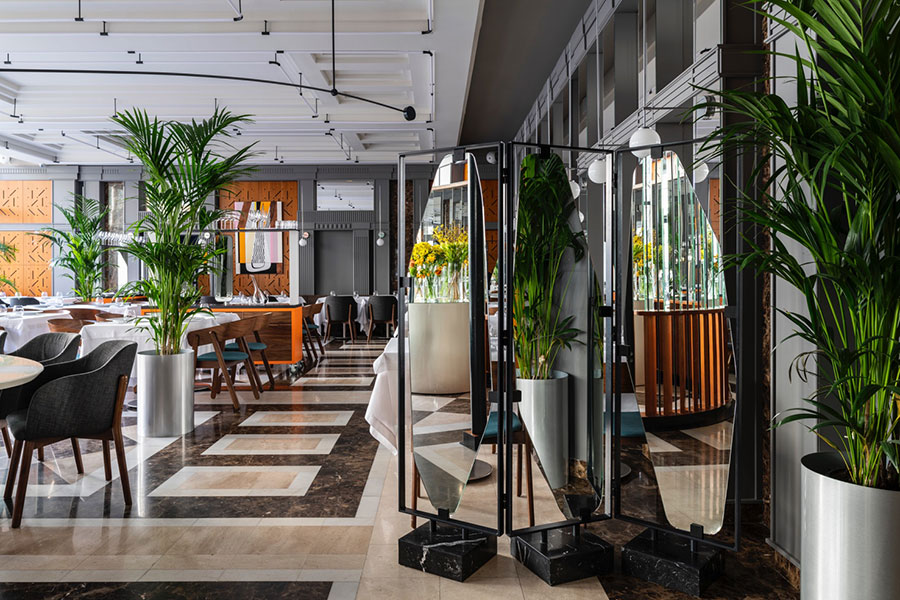 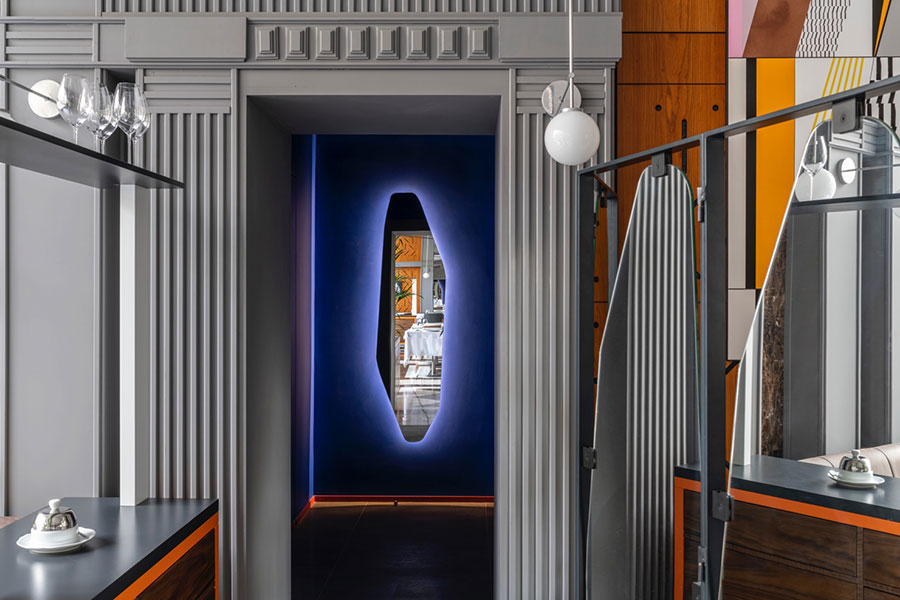 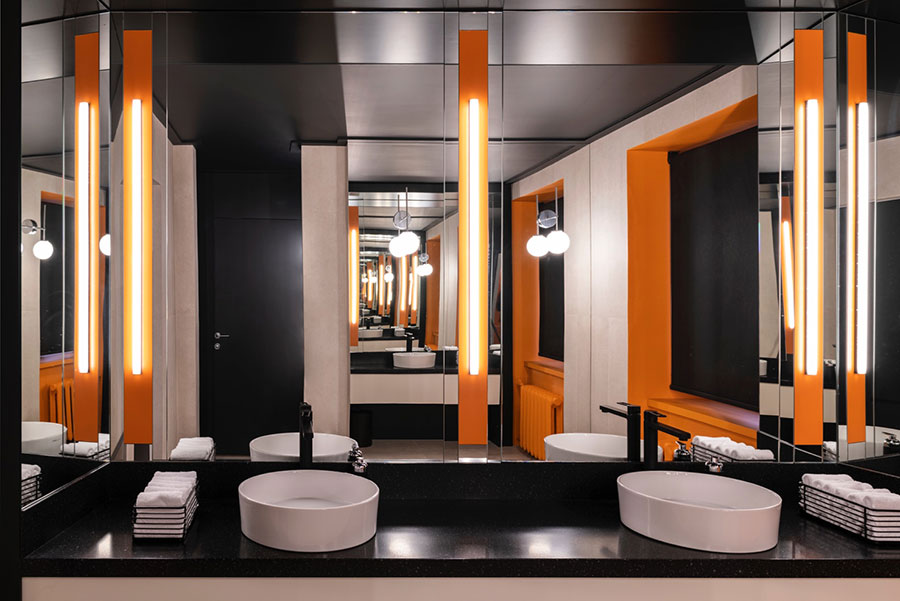