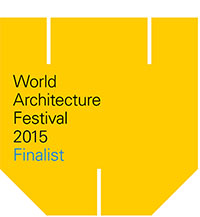 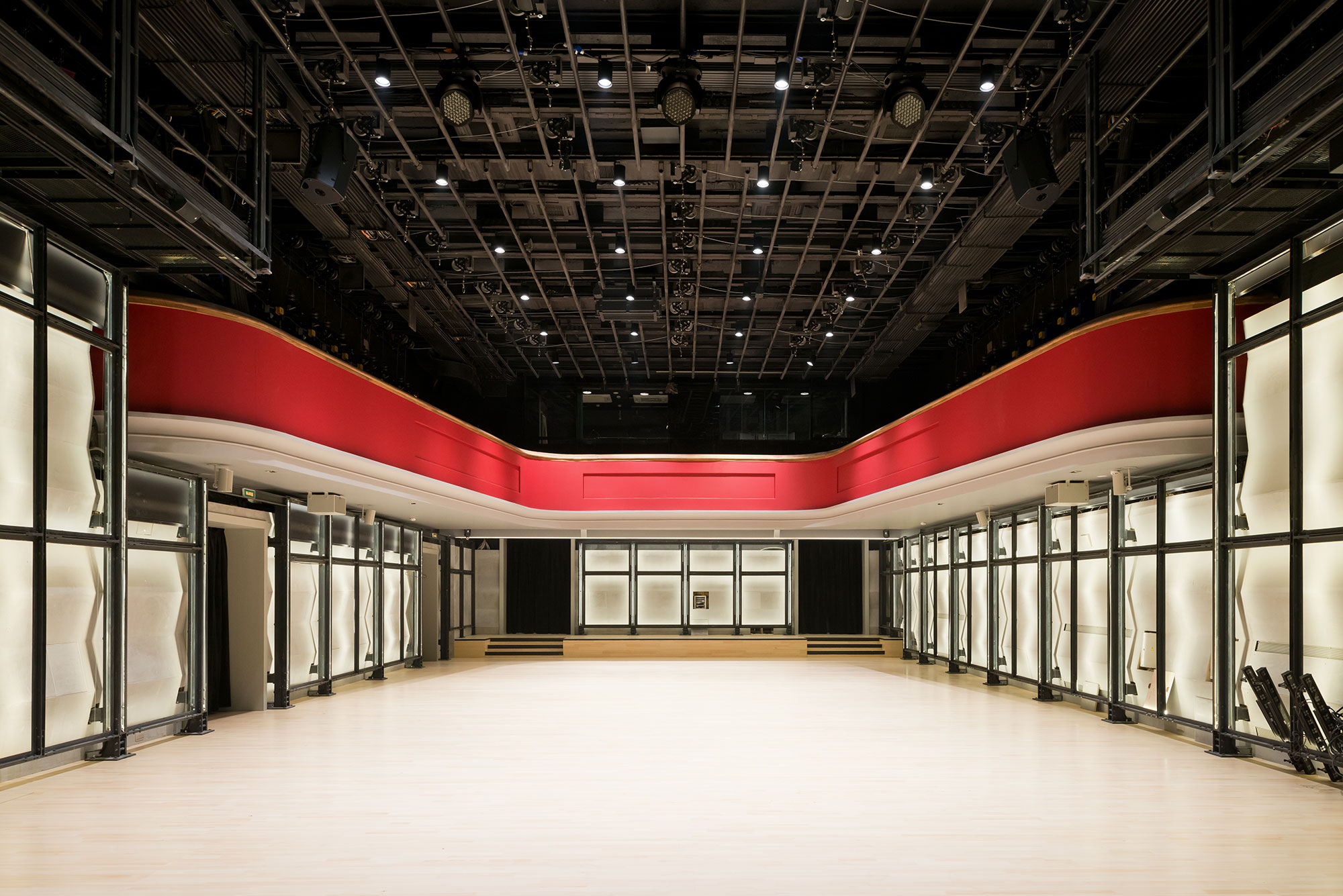 The Stanislavsky Theatre on Tverskaya has recently opened its new «Stanislavsky Electrotheatre» – an important new venue with the ambition to become a global stage direction centre. Following its reconstruction, the theatre has undergone significant enlargement – the two recently renovated corpuses now hold a hall, a drapery section, wardrobe department and scene shop – and a vast new lobby area has been created with exhibition space and an exit into the internal courtyard which, in essence, forms a new town square. This cultural institution thus becomes simultaneously an important social space in the city.

To transform the elongated building of the former cinema into a contemporary theatrical platform in which any part – be it the hall, foyer or staircase – can be used by a stage director while simultaneously conforming to the demands involved in restoration of an architecturally significant building as well as the needs of modern technology, which are often mutually exclusive.

The main principle of the «Electrotheatre» concept is the transformability of spaces and the openness of internal processes. Mobile barriers divide the technical and public zones, and the functions of these zones can be interchangeable.

A technological ceiling permits the transfer of the scenography or the audience area to any point in the hall. The latticework on the walls forms an essential continuation of the ceiling: by means of its special couplings, lights can be fixed on it, along with elements of decoration, and anchor lines can be suspended between its parts. The entire carcase of the hall thus becomes fully functional. Prior to reconstruction, the theatre held around 400 seats for audiences. New mobile seating can be placed in rows as well as be placed separately in different combinations. 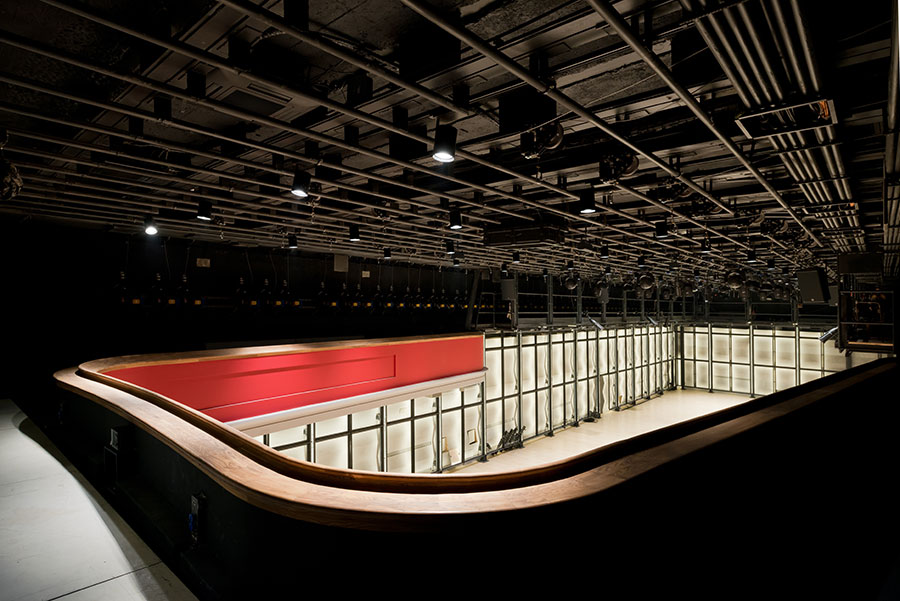 The Hall is provided with unique sound equipment. Sound moves freely across its expanse. Its lighting, sound and projection equipment have been designed and fitted by Theatrical Decoration Workshops (Saint Petersburg). 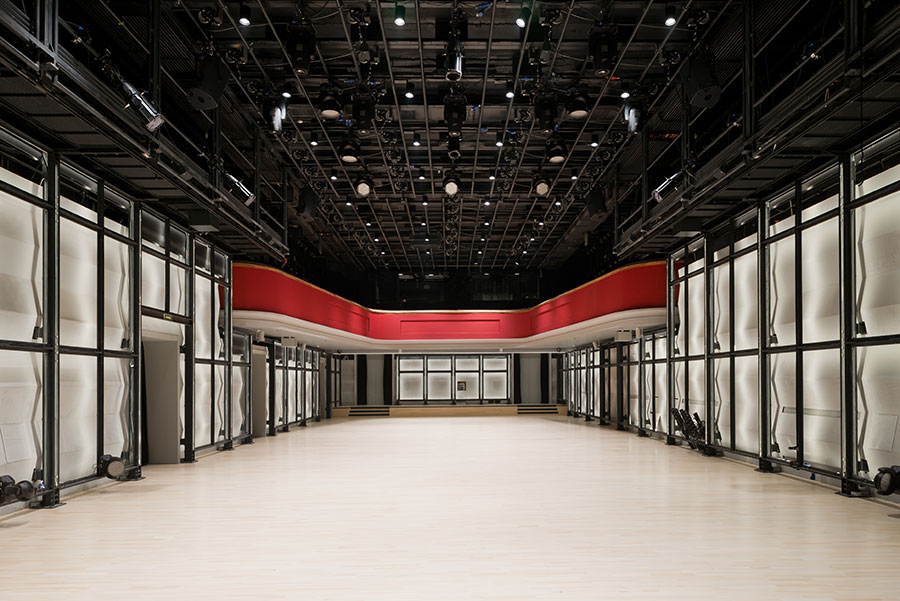 70% of the wall panels reflect sound, and 30% absorb it. This is possible thanks to their different texture and form: in order to spread sound across the hall, the panels have been constructed with a zigzag form. 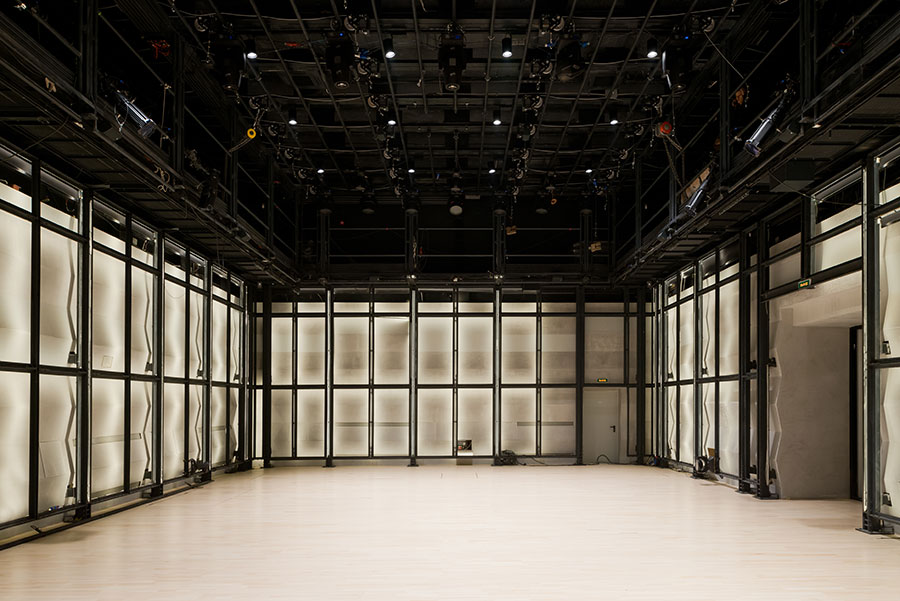 The Hall can change its appearance completely. For example, if roller blinds are pulled down along the walls, it becomes completely black. It can perform the role of screens, on which images are projected to aid in bringing to life any conception of direction. 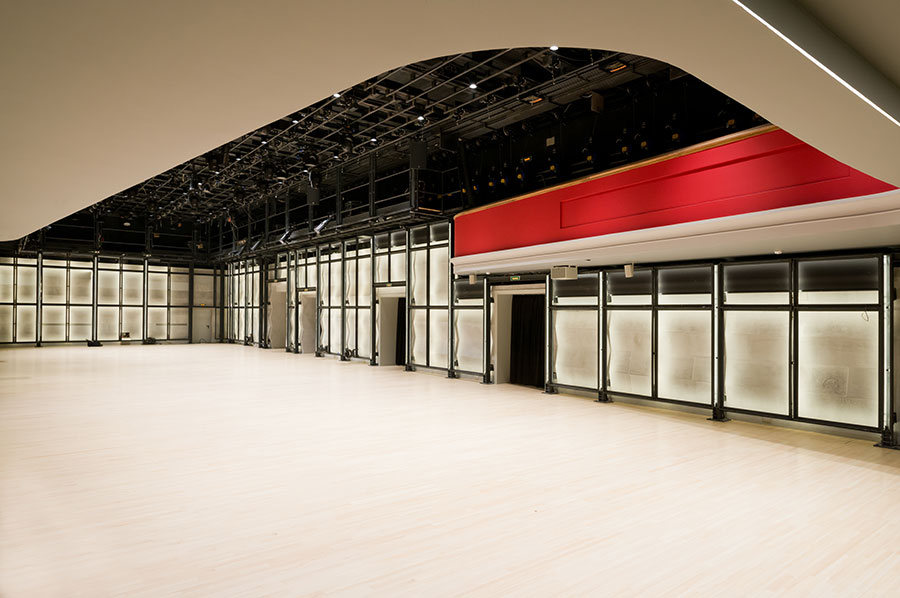 The Balcony is the only historical element in the hall. It has been meticulously restored and returned to its original look. A choir and orchestra could be employed here. 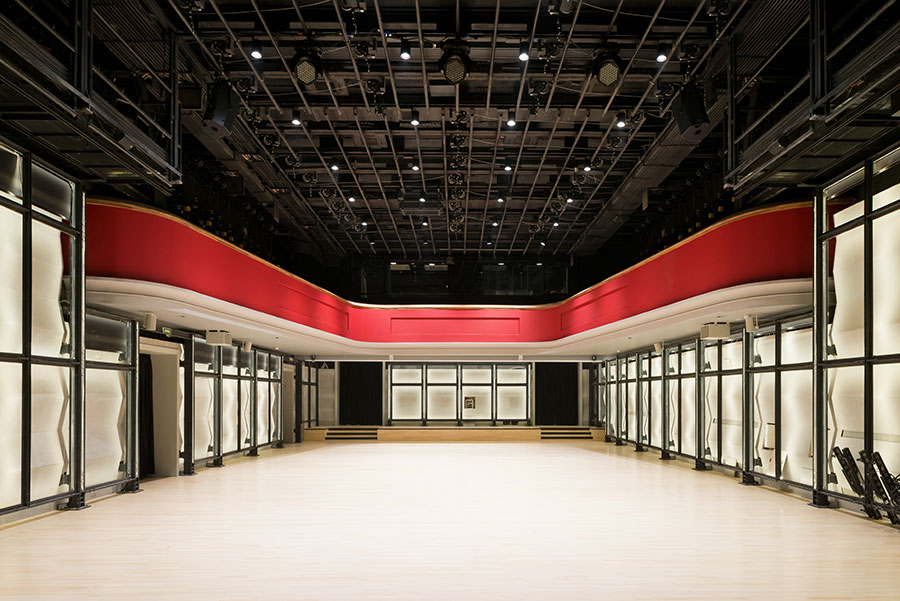 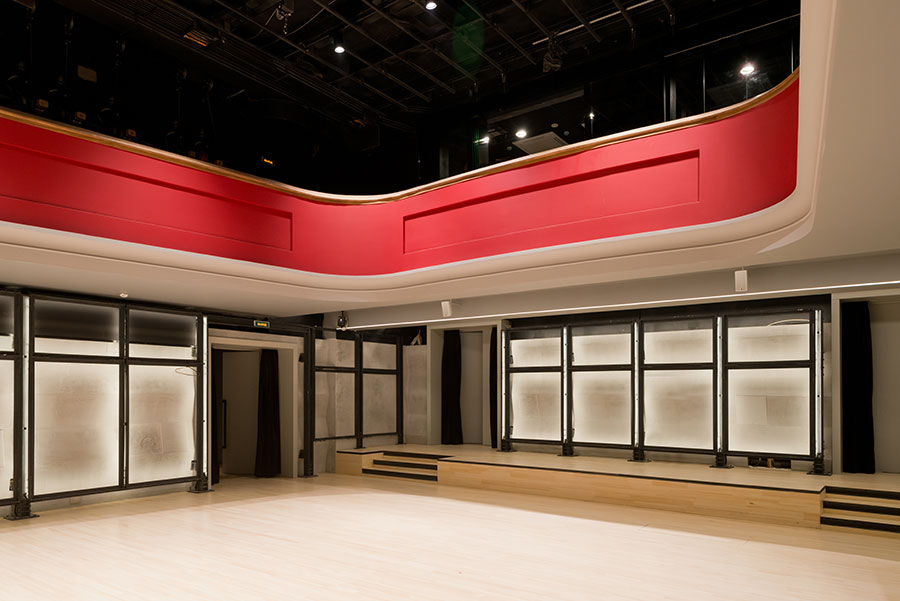 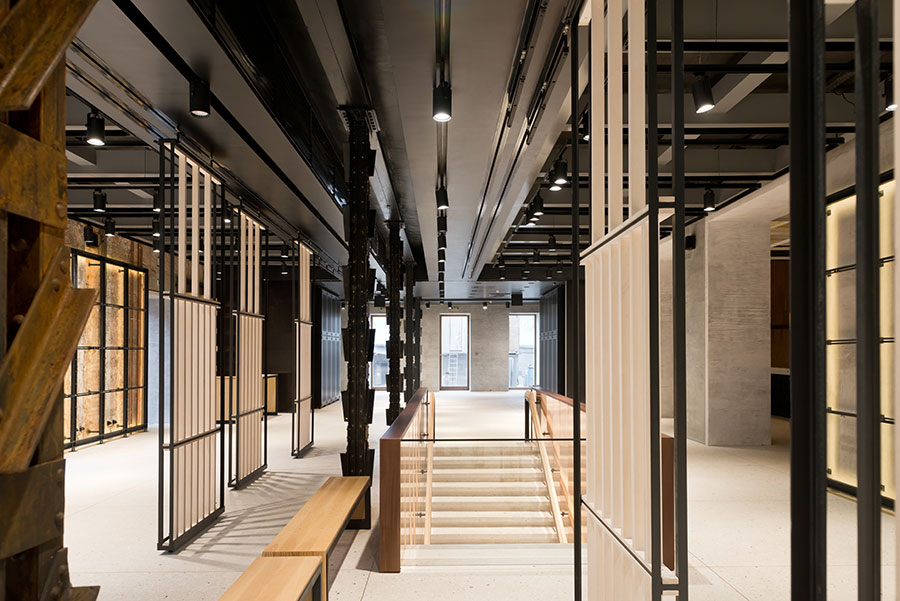 The same structures can be seen in the Foyer as in the Hall (albeit in a simplified form): display panels may be fixed onto them, or elements of scenery, when events are held here.

From the cloakroom, the visitor makes his way into the Foyer. Previously, this space was not used – serving as a technical area. Now, the vast space of the Foyer can be employed in whatever way desired: as an exhibition hall, for instance. 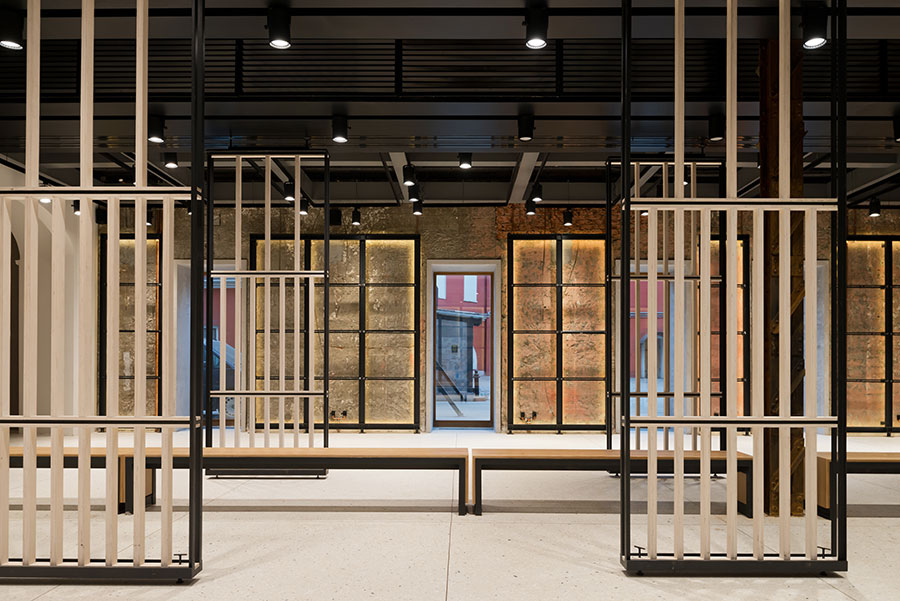 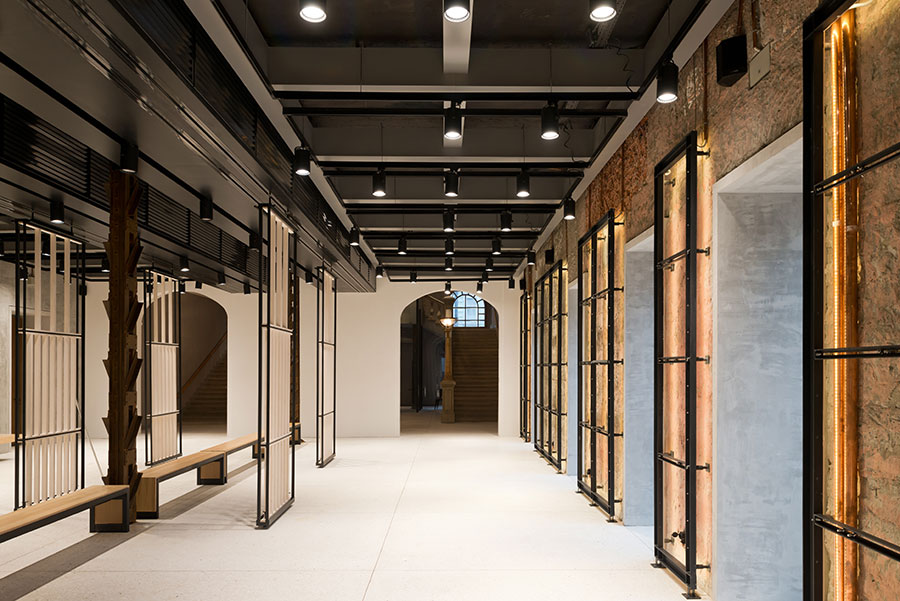 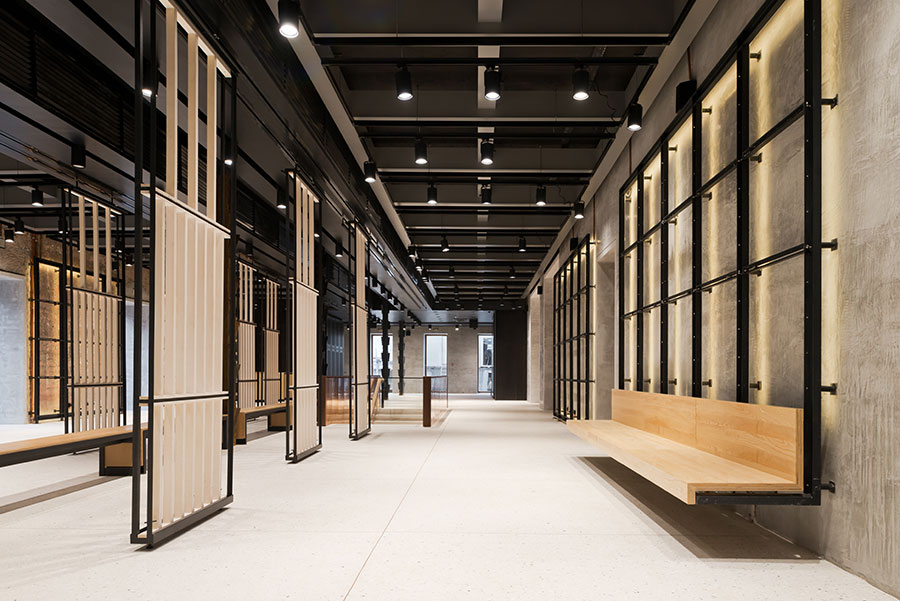 Pylons and mobile barriers in the Foyer act simultaneously as latticework for the fixture of exhibition elements. False caissons are visible on the ceiling: inside each of these compartments is a track for lighting, which can be used to fasten display banners. 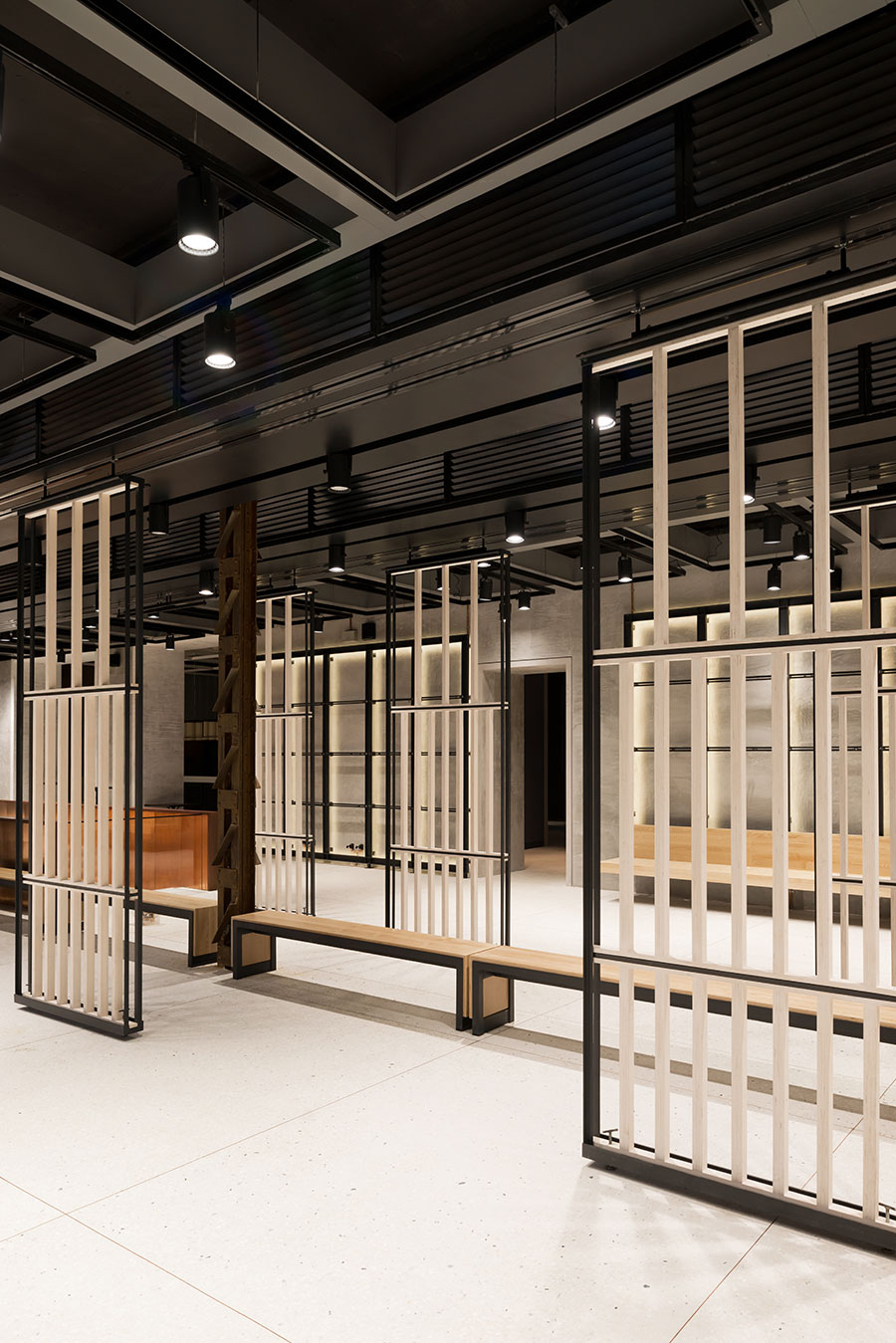 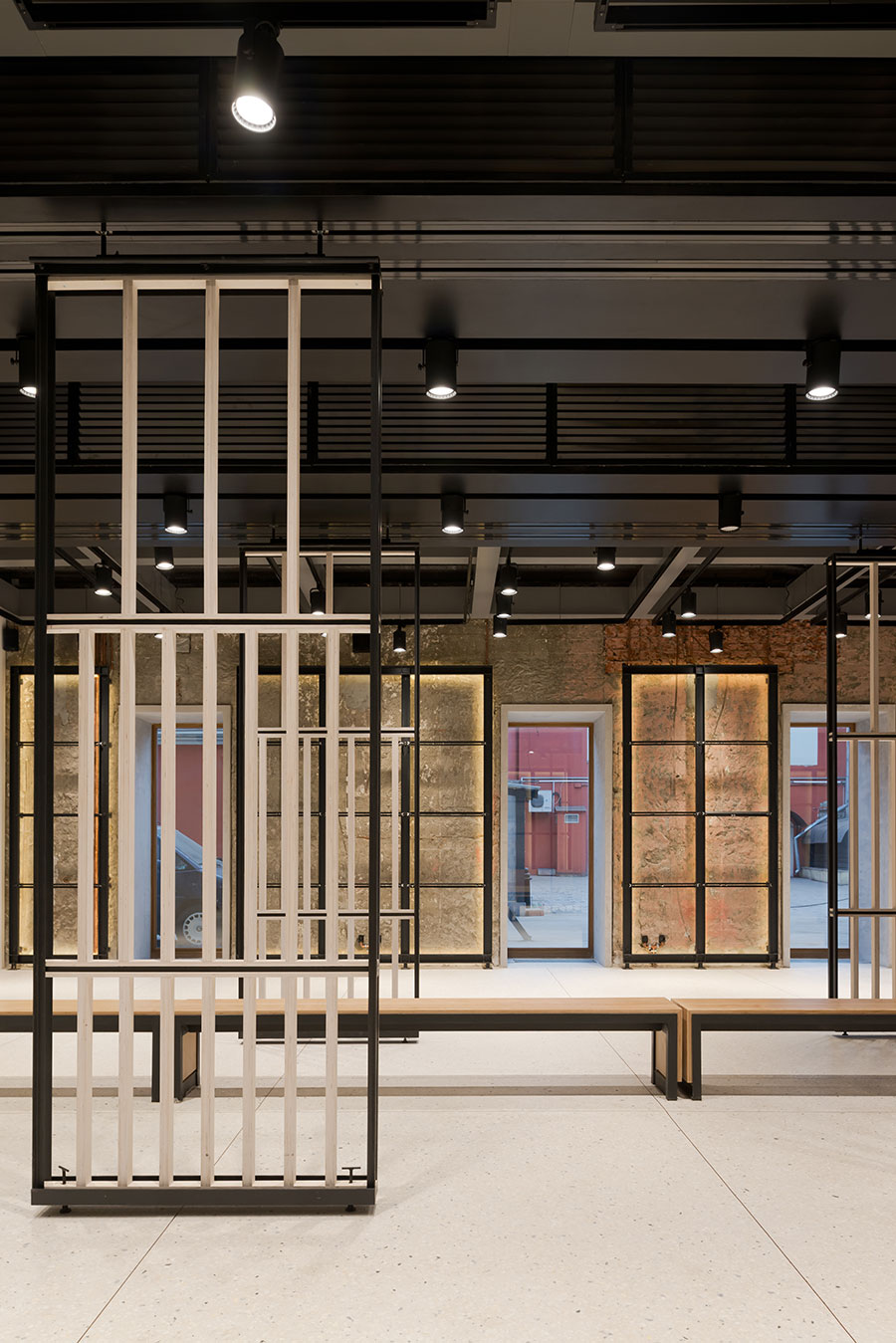 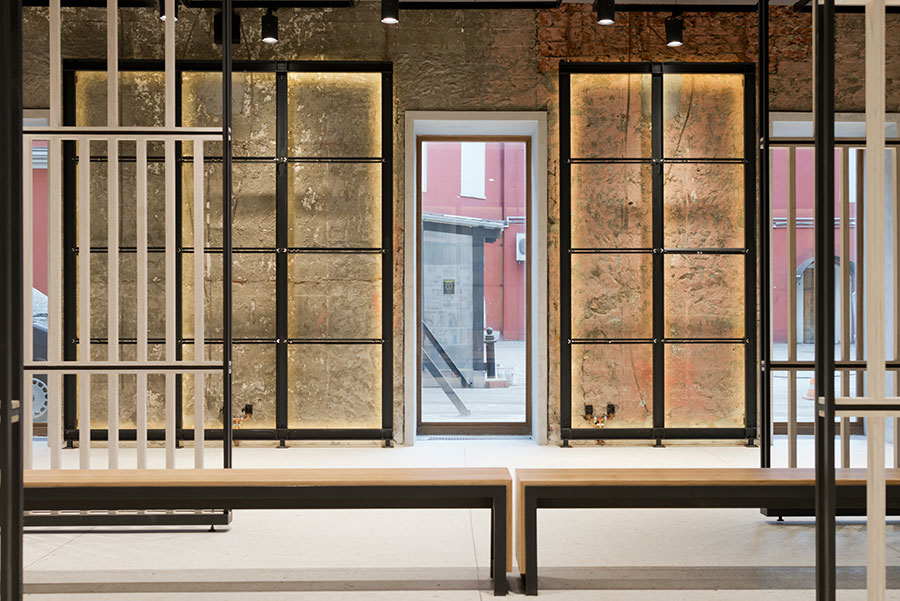 Following reconstruction, three vital elements were revealed, totally changing the logistics of the theatre: the staircases. Two of these are new: they are visible from the entrance, lead into the basement, and are brass-finished. The third is found in the main foyer area.

A further corpus was added to the first building during reconstruction. Scenery is lifted via the side stage onto the stage itself, and actors move from the make-up rooms via a passageway into the neighbouring building, where a side stage and waiting room are located. The wardrobe departments are placed on the fourth floor, and the second floor has a laundry room. 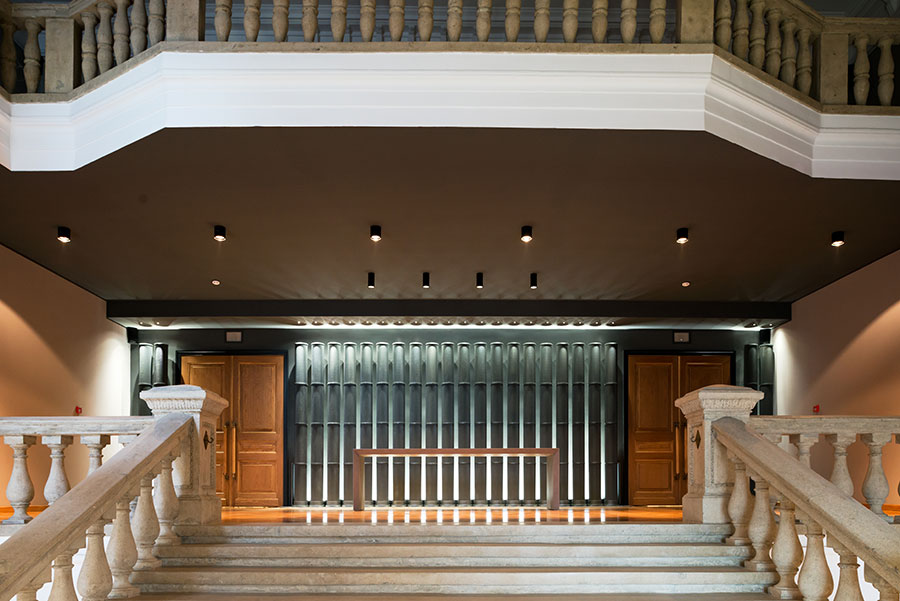 The whole building has been meticulously restored and cleared of the accretions dating to the period from the 1950s to 1990s, when new paint and new flooring were simply applied or fitted directly on top of the old. The pre-Revolution plasterwork has been revealed once more in its totality, looking now just as it did in 1915. 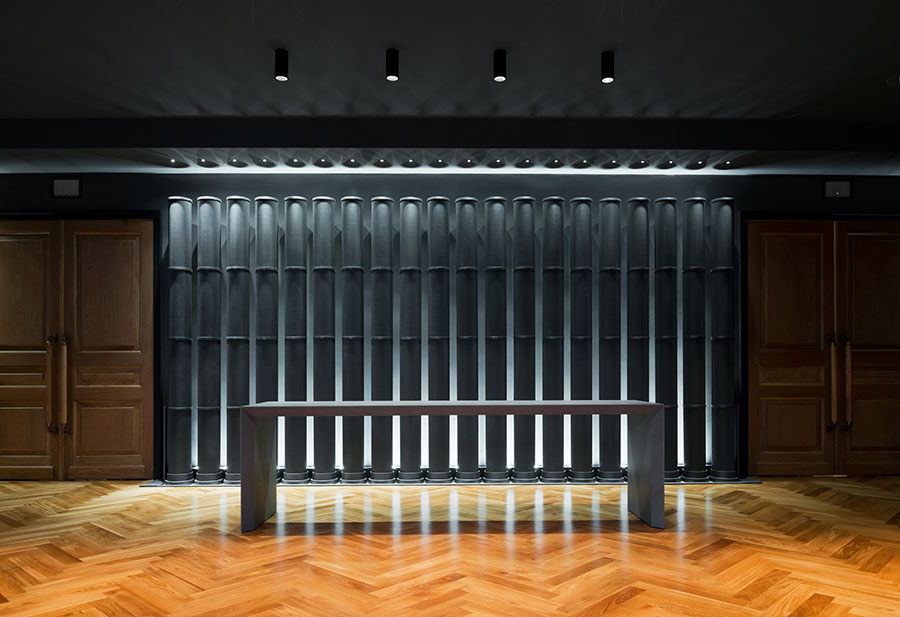 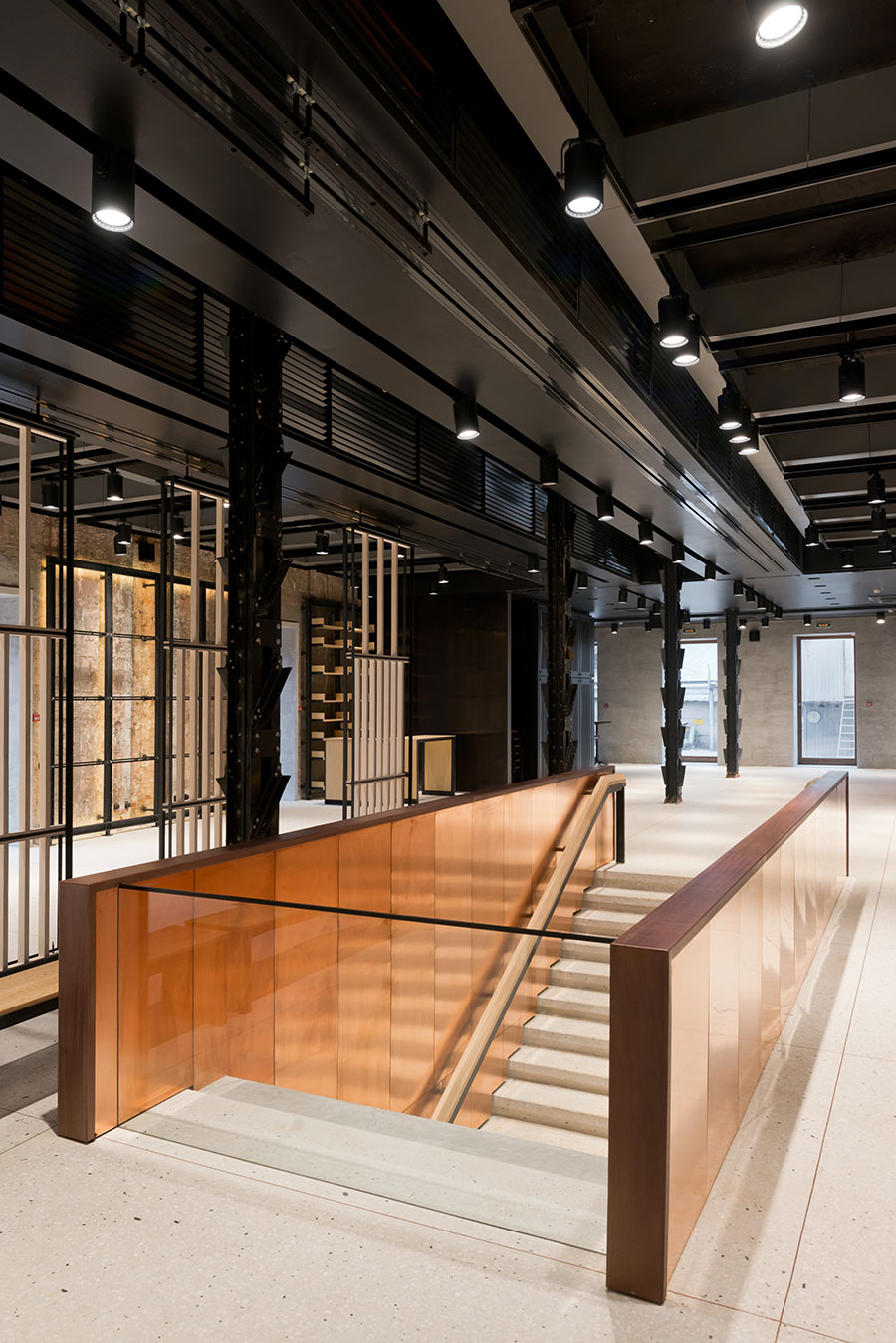 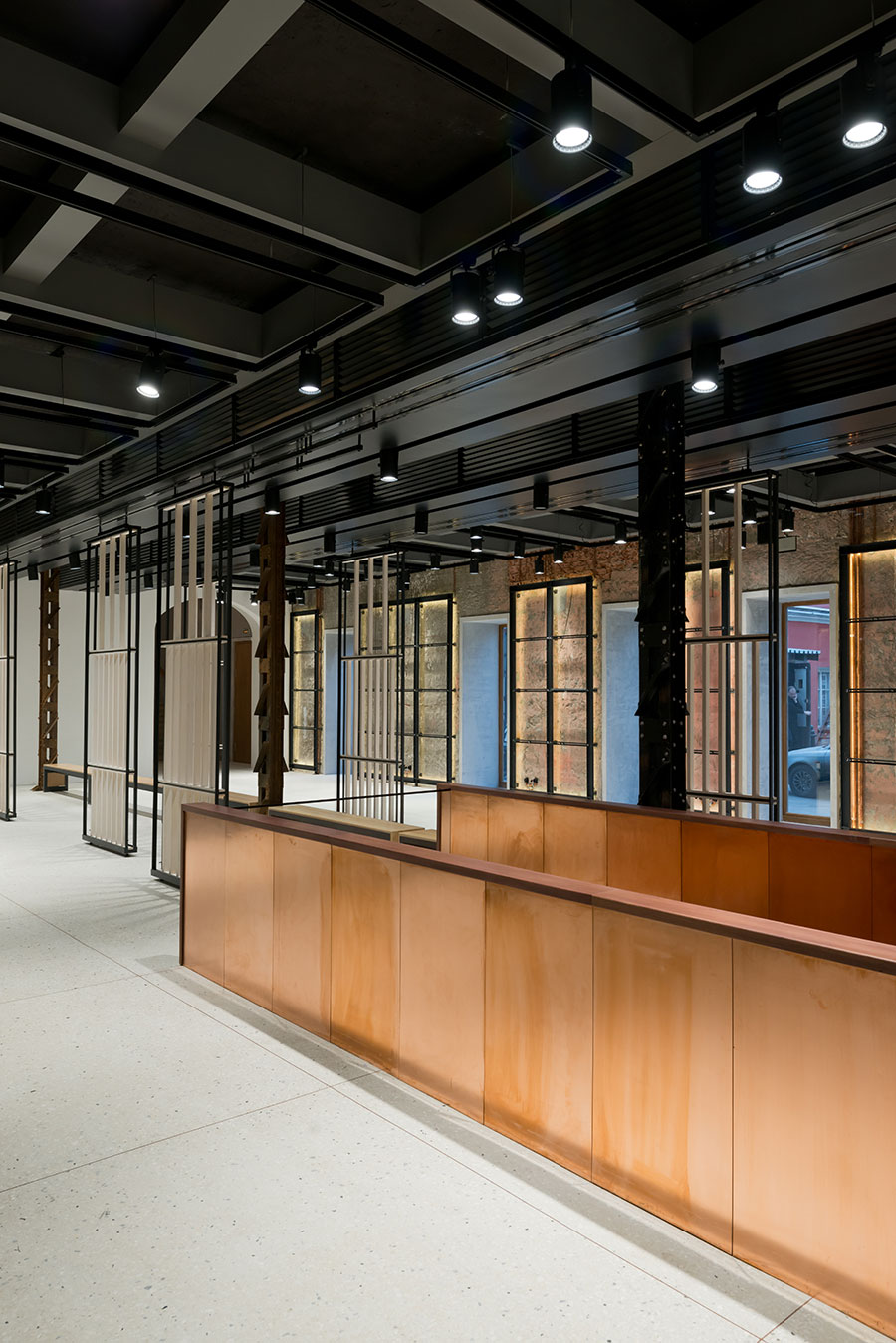 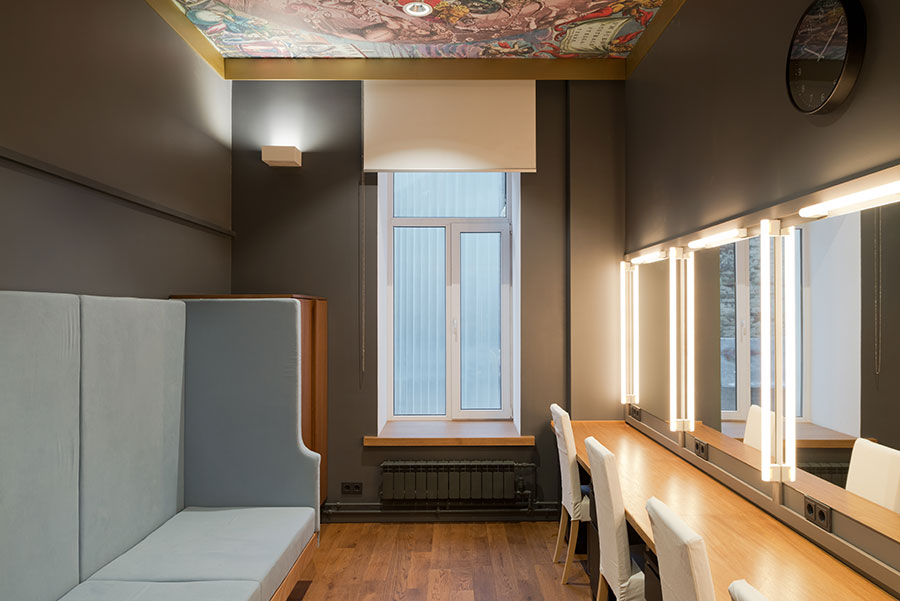 The actors´ waiting room and make-up area form a laconic space with a colourful ceiling. The communal make-up area is designed to serve eight persons, and the VIP make-up room – two. The make-up stations have the appearance of a hotel room. On the ceilings are copies of 15th century engravings. The sofas have been custom made according to a special design.

On the wall in the corridor are graphics by the Theatre´s artistic director, Boris Yukhananov. 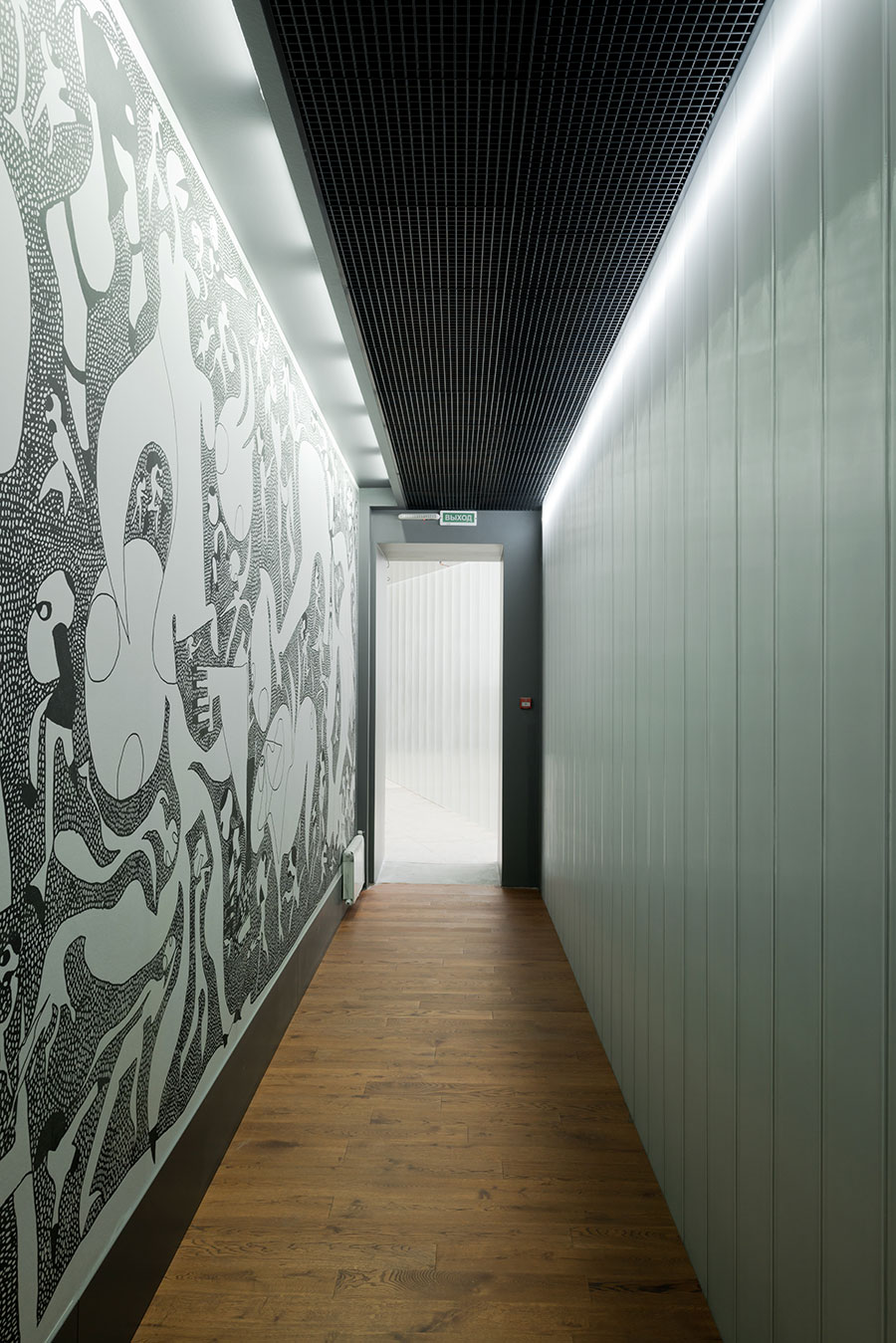 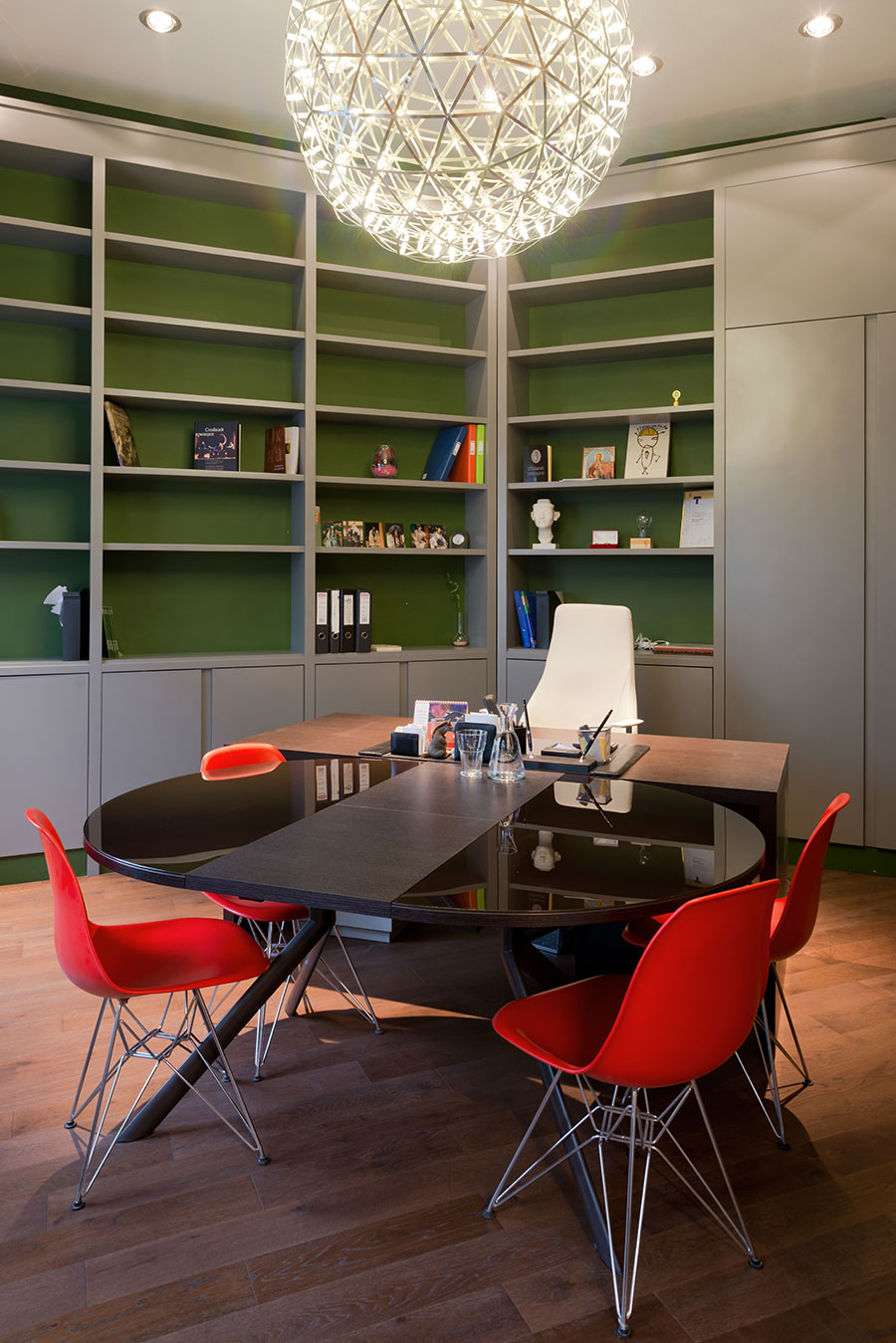 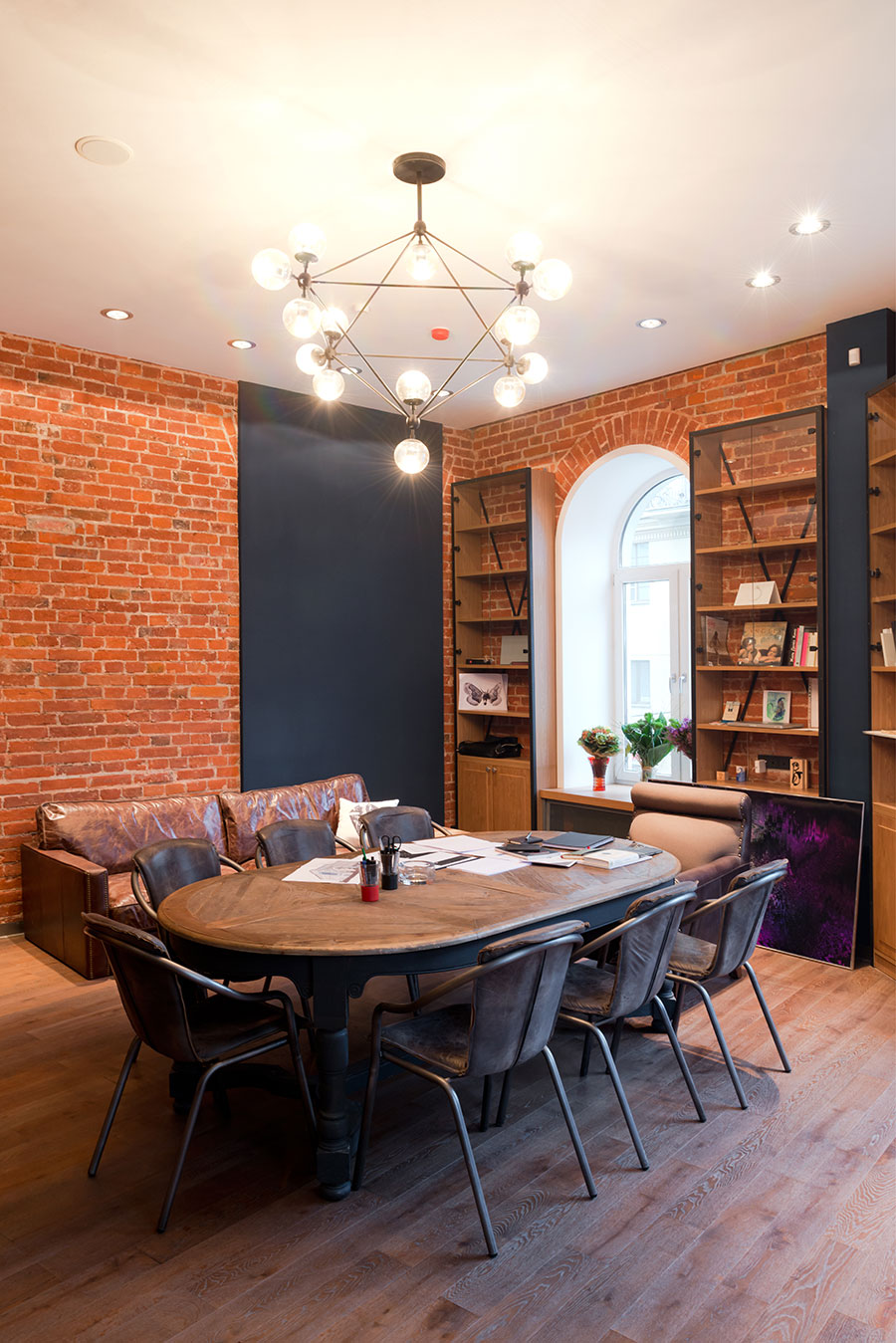 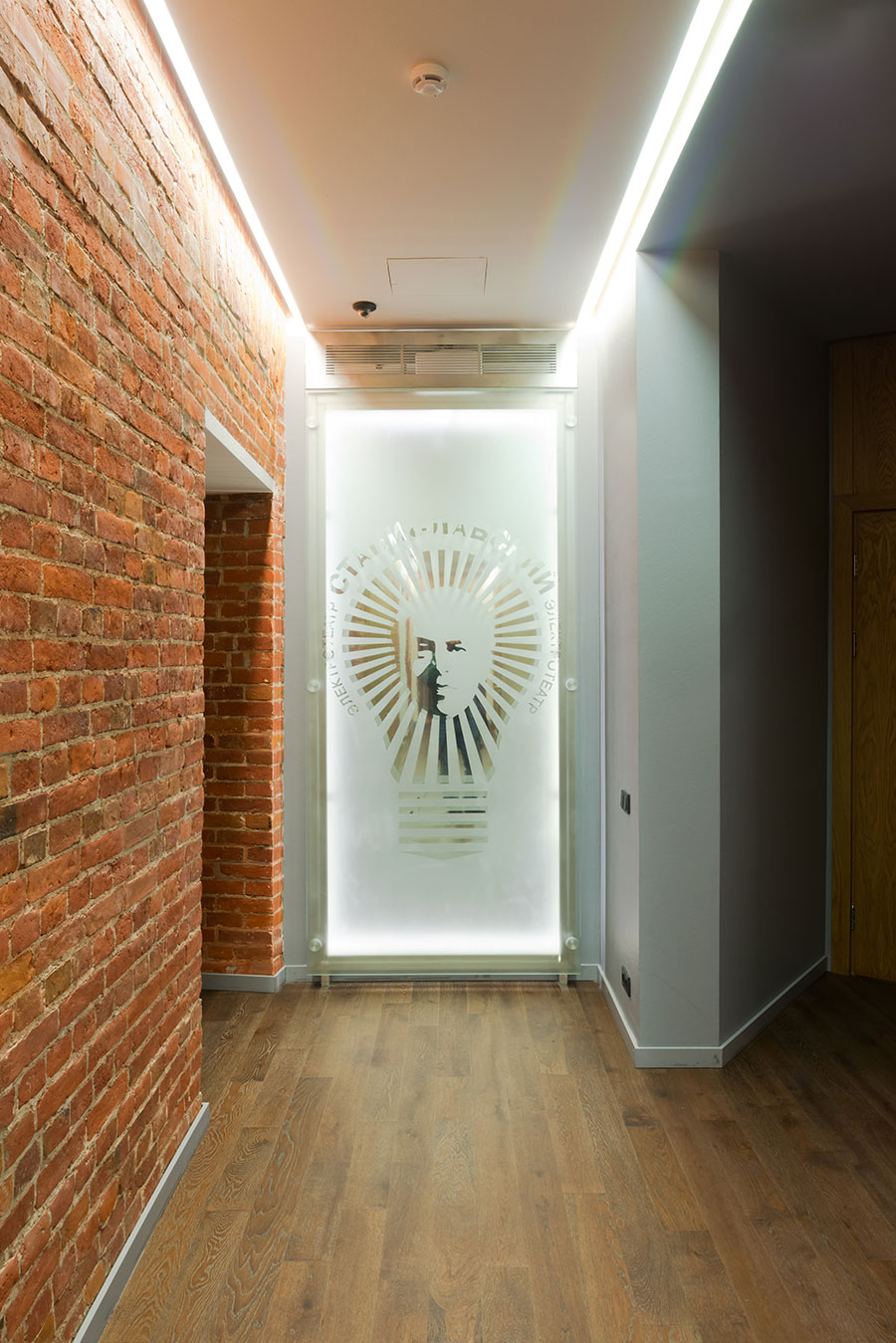 Sound recording studios and editing rooms are located in the basement. Here the plays are recorded.

Next to this is the store room. Unloading of shipments will take place on the first floor level, after which the scenery is moved to the second floor by means of a loading bridge, from whence they are taken onto the stage.

The Theatre occupies two buildings of different periods: part of a small house dating to the early 20th century and a later building. A multitude of problems has always been associated with this, due to the difference in floor level between the buildings. As a result of the reconstruction, a new connecting passageway and lift have been provided between the two, thanks to which the costumes from the wardrobe department on the fourth floor can now make their way with ease to the second floor, and then to the dressing rooms. 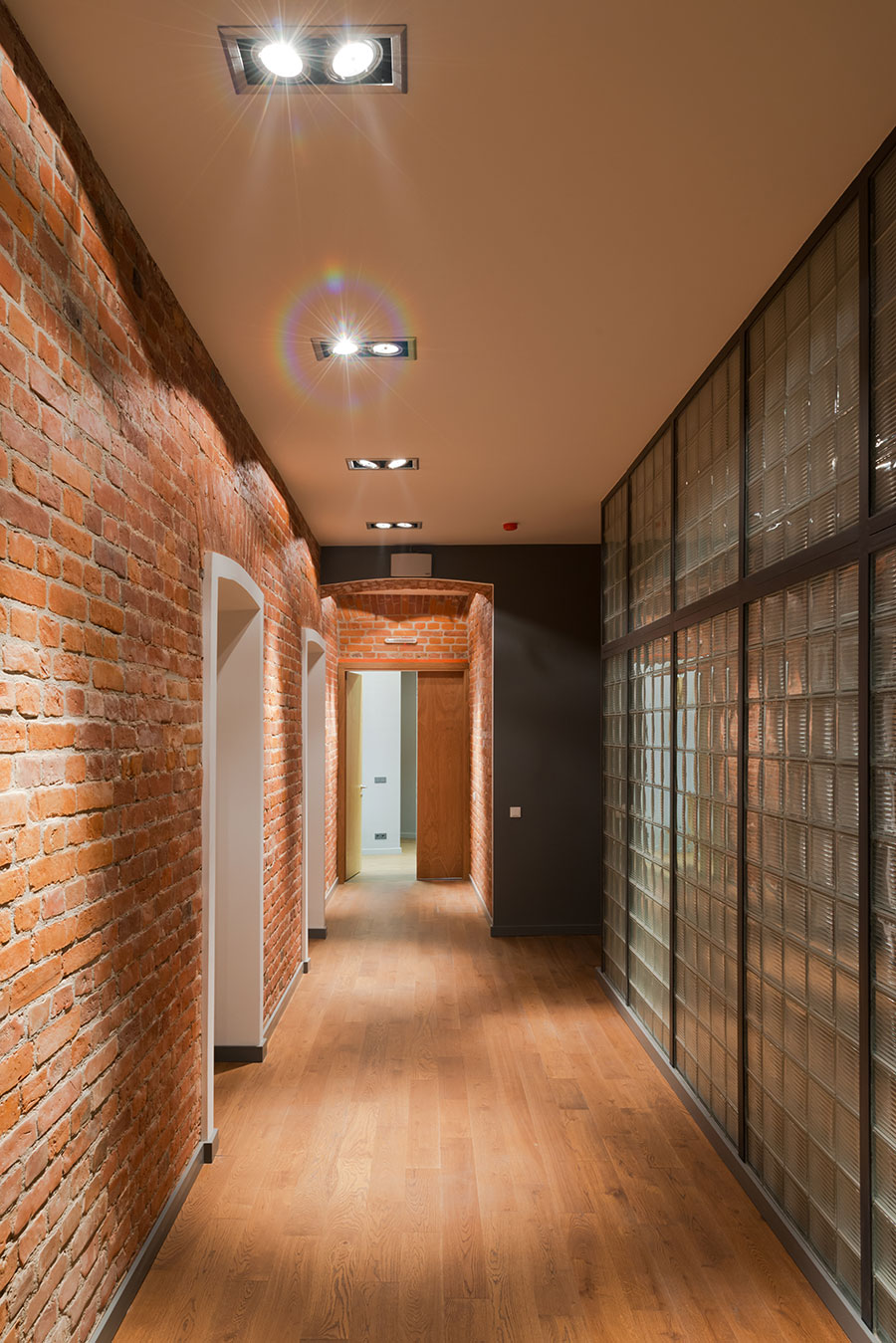 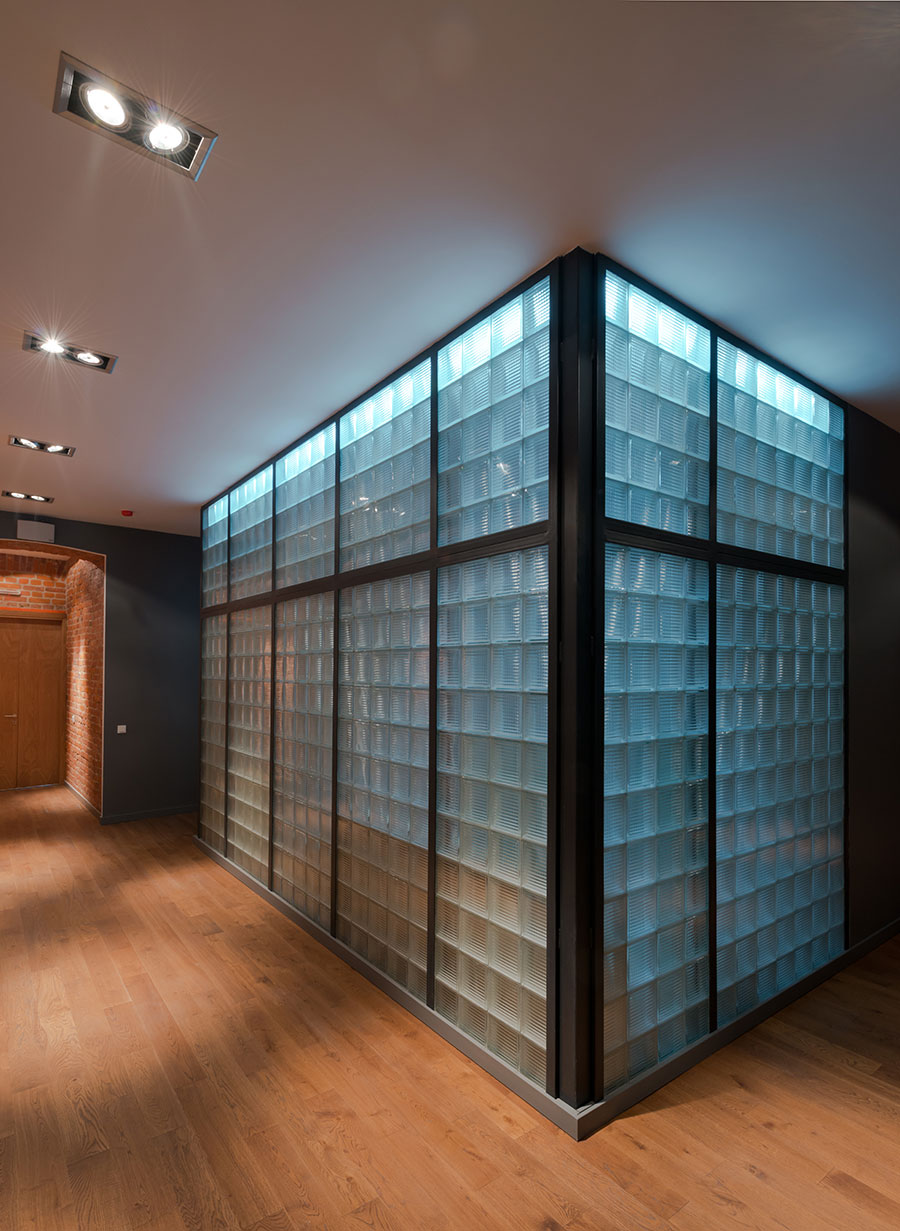