Development of the Tsarskaya ploschad residential complex in Moscow 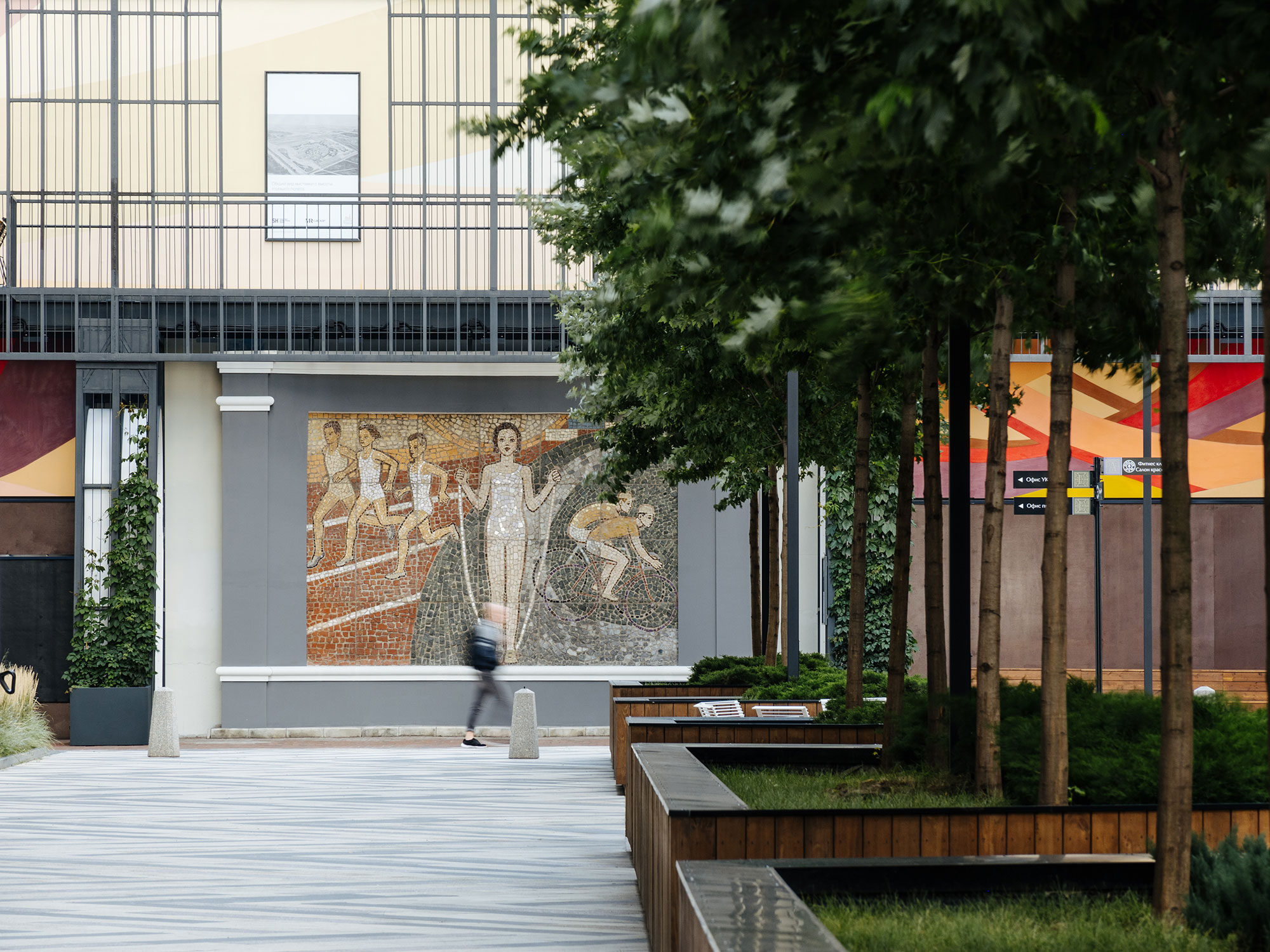 The Tsarskaya ploschad residential complex consists of three closed blocks with a varying number of storyes and a separately standing 21-storey building. Its territory is remarkable for including historical and cultural heritage objects, which we wanted to highlight in our project. We restored the fragments of the Young Pioneers stadium, which was located on the site of the complex.

to create a new type of a yard, one that would become an appealing public space both for the residents of this residential complex and the neighbouring houses.

to preserve the cultural heritage objects and to incorporate them into the general composition of the space, transforming the yard into a green garden with a generous and complex infrastructure available to all age groups.

The volumetric and spatial composition of the development area clearly distinguishes among several types of spaces based on their accessibility: private yards, open boulevards with a kids’ playground and a sports zone, as well as a piazza in front of the Tsar Pavilion. 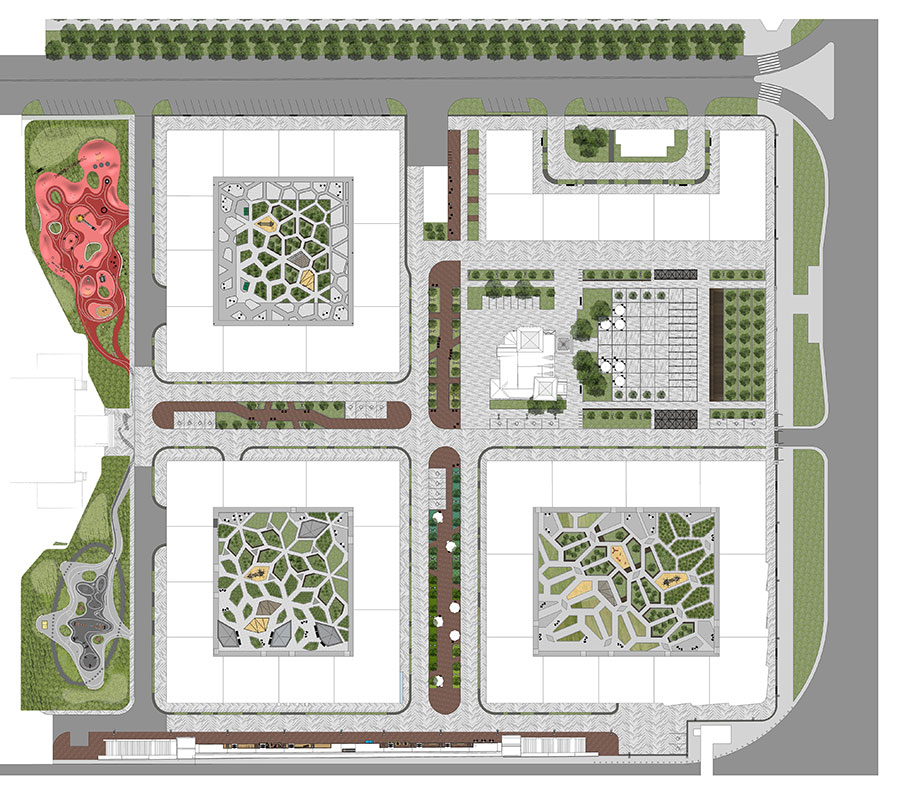 Along the pedestrian boulevards in between the buildings there are alleys with maple trees in planter boxes. The roads are paved with large tiles with a parquet pattern, which unites visually the outside spaces of the complex. The central parts of the alley are highlighted by the inlaid Flemish brick. 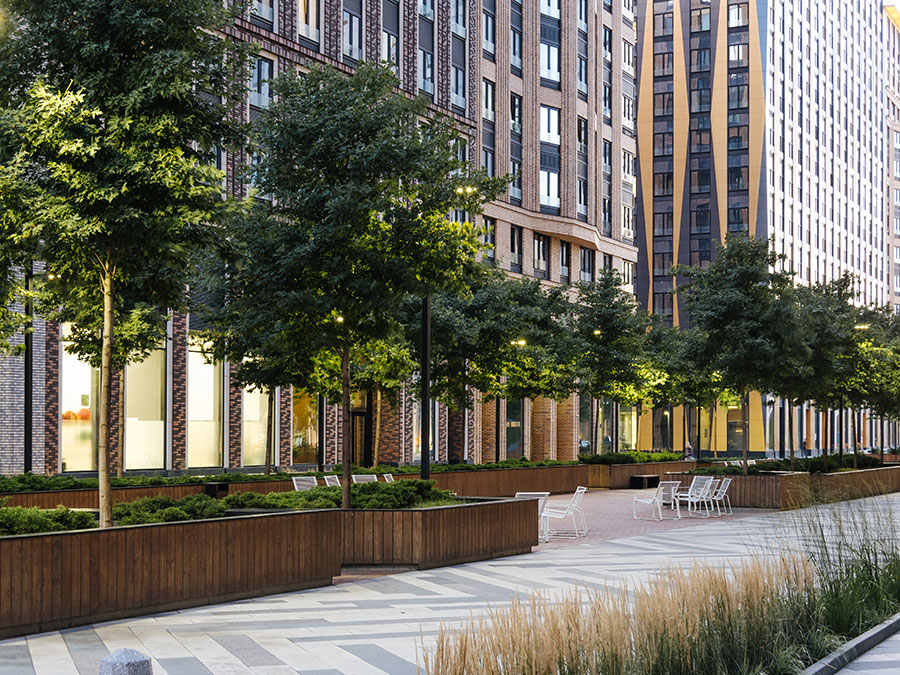 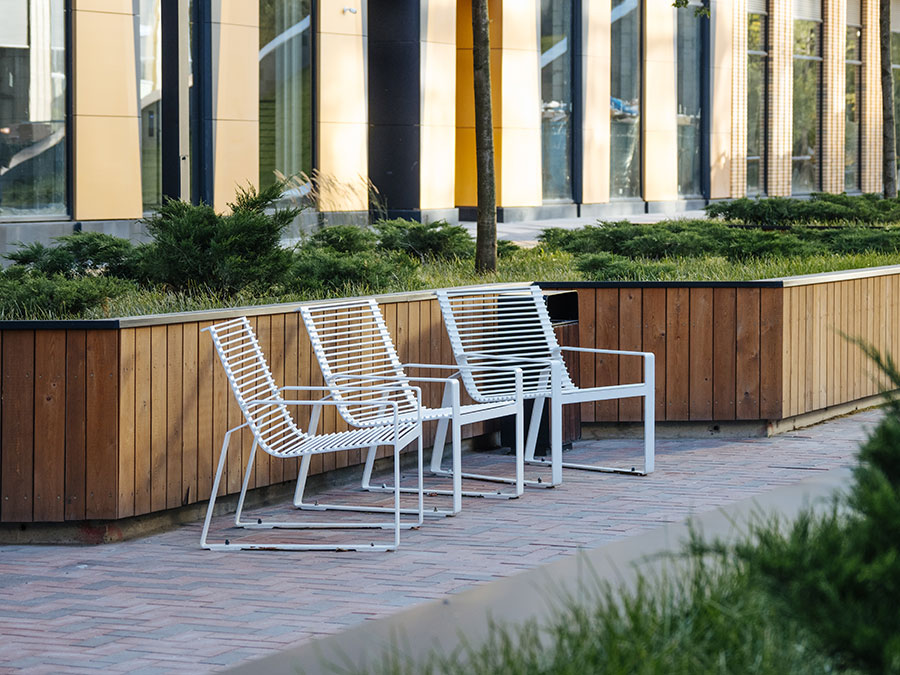 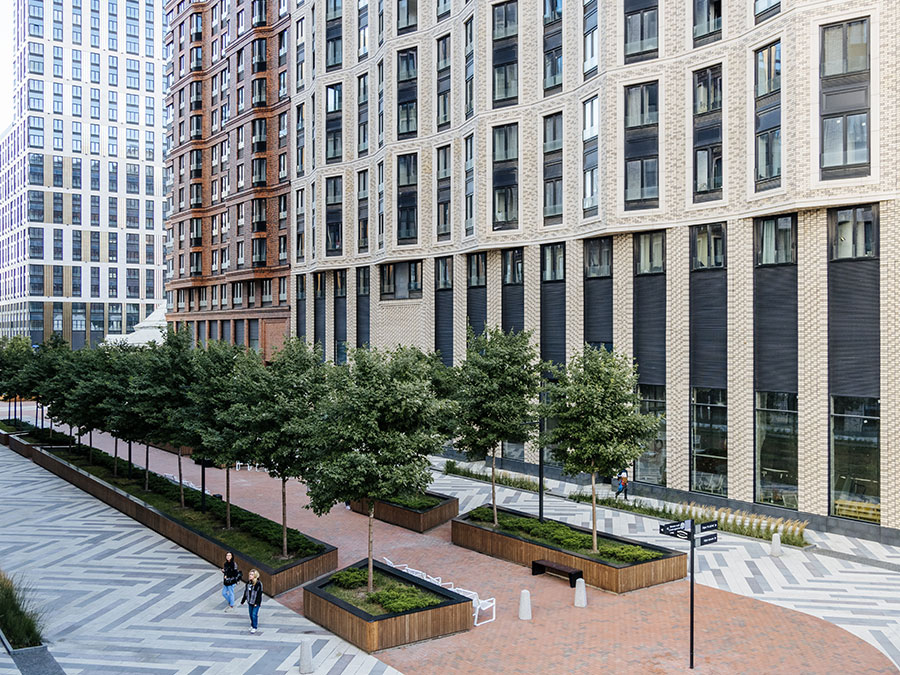 A peculiarity of this project was the fact we were working with the cultural heritage: the objects restored by us shaped a visual image of the residential complex territory, which made it unique. Thus, we incorporated into the general composition the landmarks dating back to two epochs: the Tsar Pavilion dating back to the times of Alexander III and the fragments of the Young Pioneers stadium, which opened back in 1934. 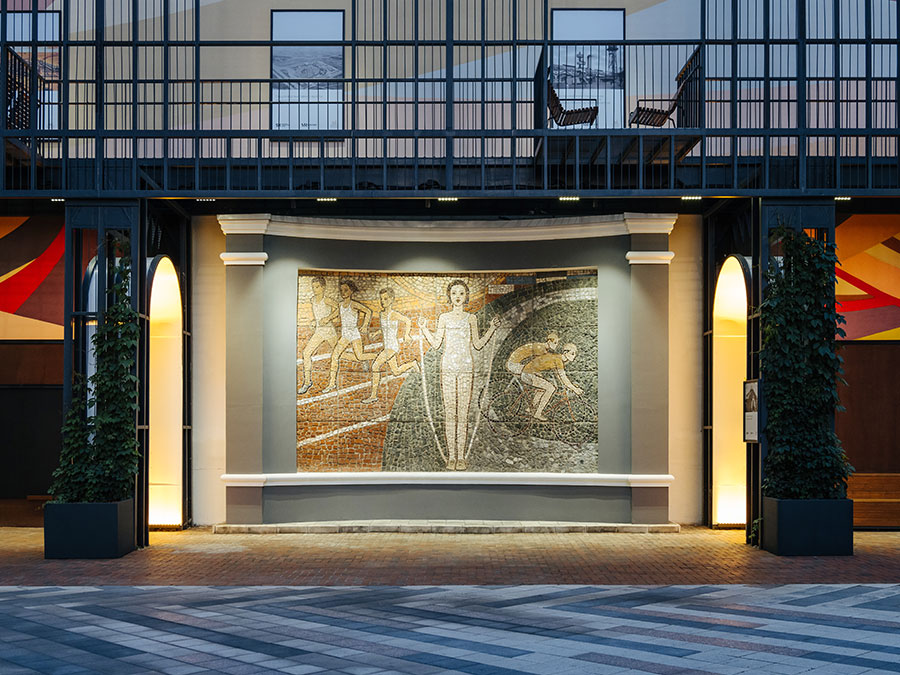 The Tsar Pavilion was erected in 1882 to celebrate the XV All-Russia Industrial and Art Exhibition, which was to be visited by the emperor Alexander III. The piazza in surrounding the restored pavilion is the main public space of the territory. Not only the residents of the complex but also the public at large have gained access to this cultural heritage. 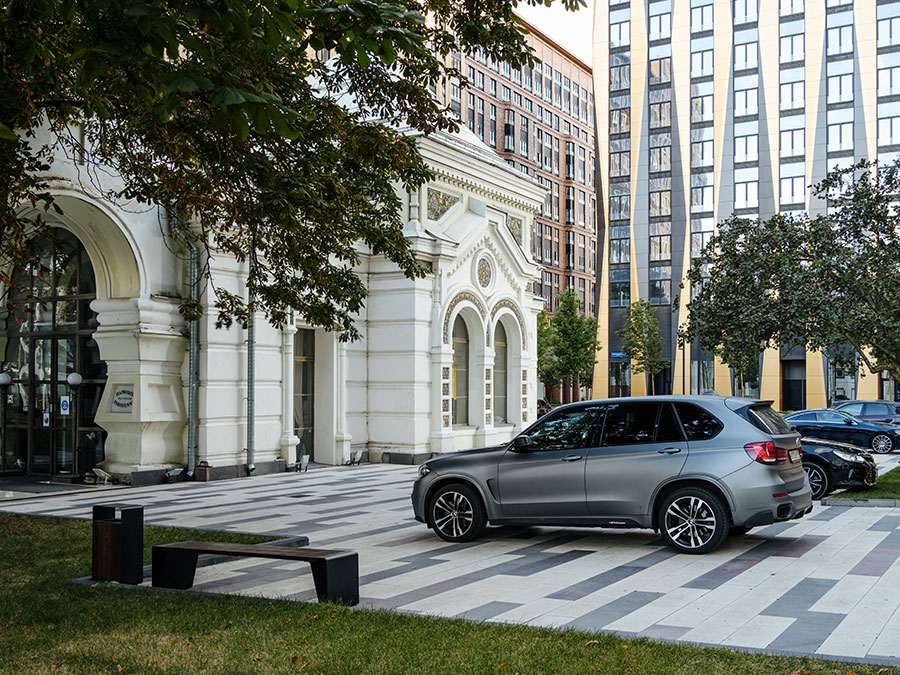 The piazza accommodates also a dry fountain surrounded by pergolas with swings on both sides. The geometry of the development area turns the Tsar Pavilion into the central object of both the square and the whole complex. The residential complex was designed so as to make the historic pavilion clearly visible from the Leningradsky prospect. 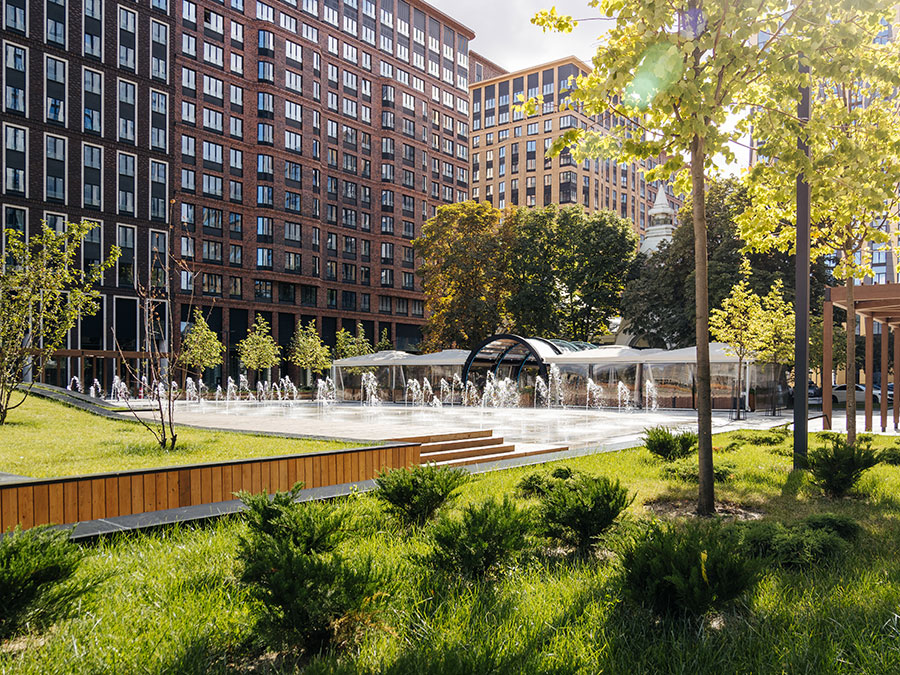 The restored fragment of the wall belonging to the former Young Pioneers stadium helps to protect the square in front of the pavilion from the noise of the cars passing by. We were able to restore the key elements of the stadium: a part of the wall and two mosaic panels. Pic 10 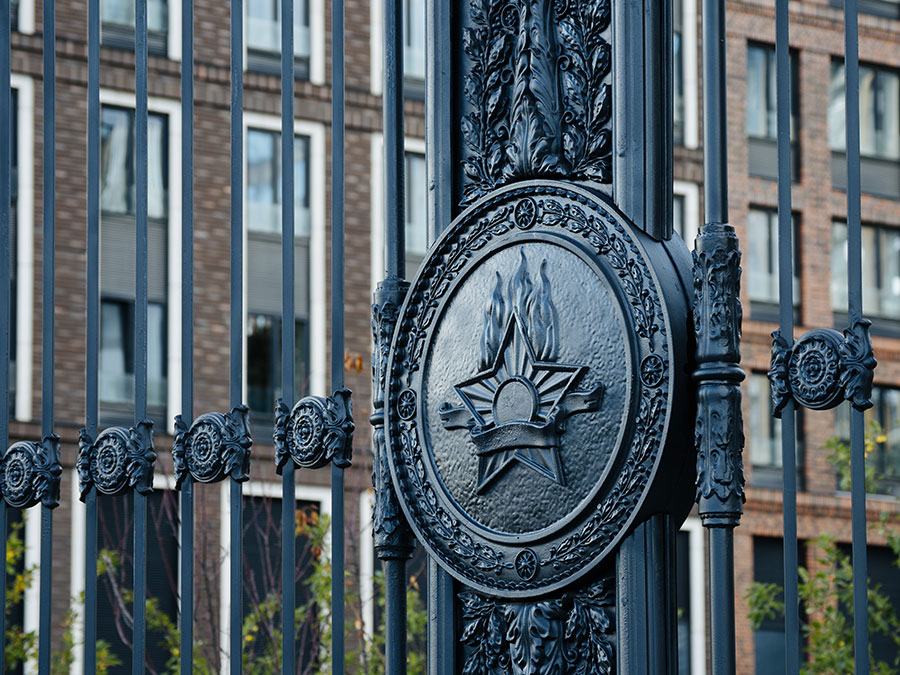 The children with sports equipment depicted in the panels became an essential element based on which we shaped the territory surrounding the mosaics. 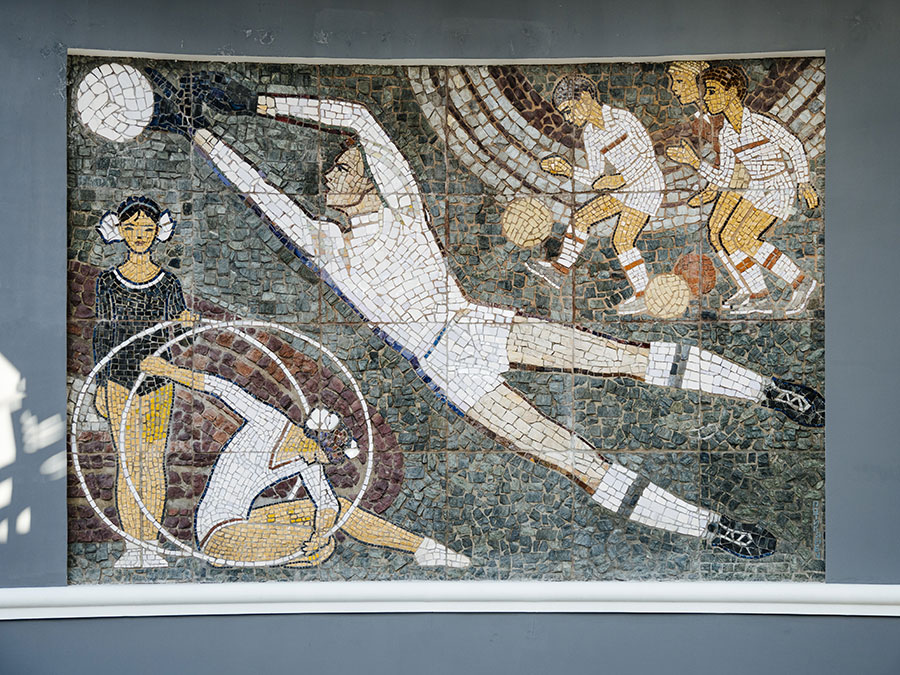 Until recently, the stadium wall used to have only a decorative function. Within the development project a gym wall bars section was added with a pedestrian gallery connecting the preserved stairs of the wall and the small zones at the first level of the glass-house. The structure enlarges the functional content of the complex and gives a chance to see the territory from a new angle. 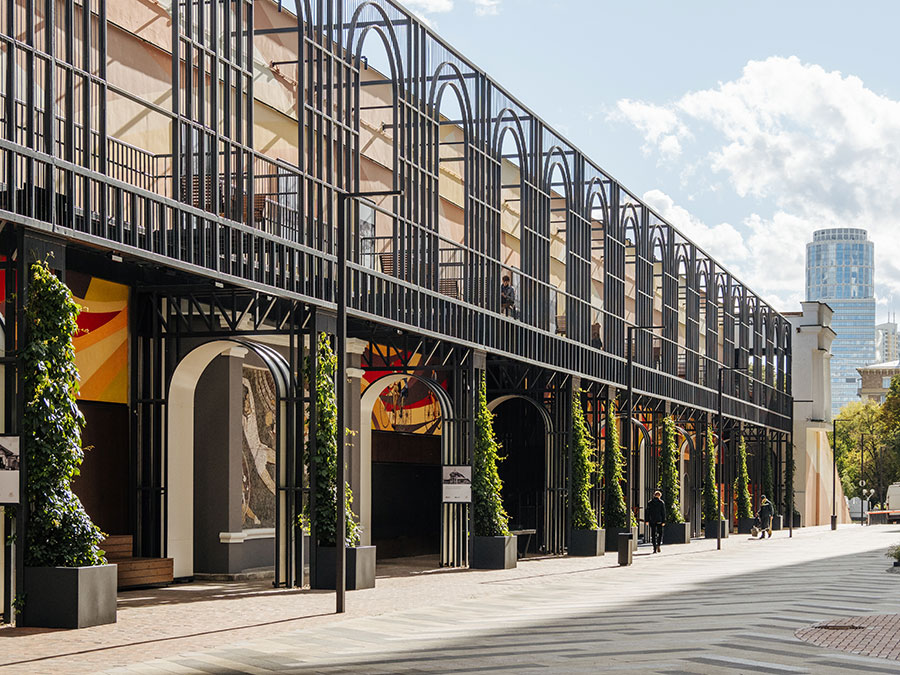 The restored Soviet mosaics are located in two niches, while two other ones accommodated tables for tennis, four more niches have kids and adults sport equipment - each occupying two of these four niches. The gym wall bars include also two amphitheatres and an additional staircase to the second level. 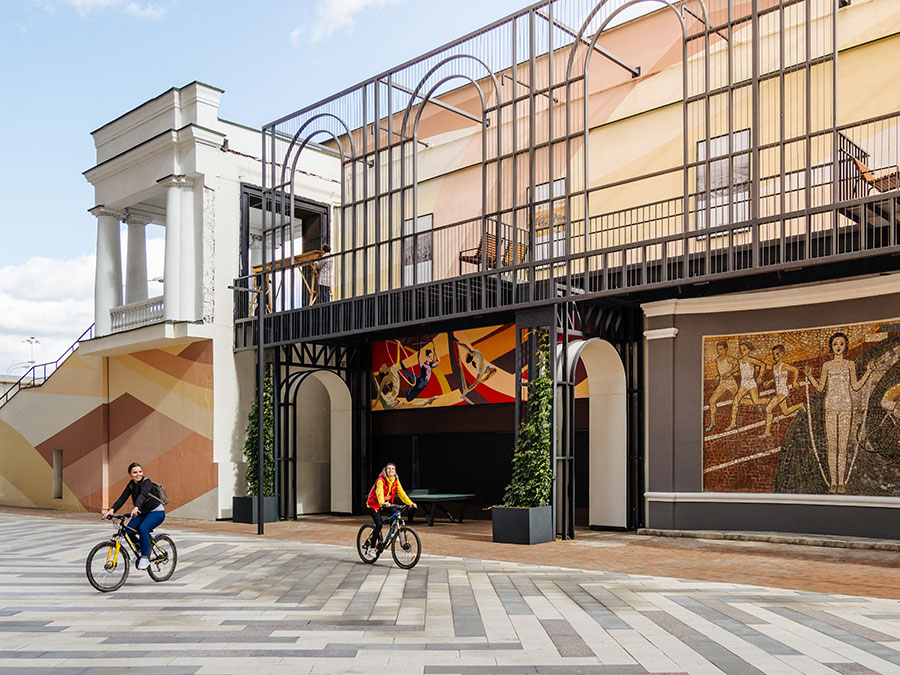 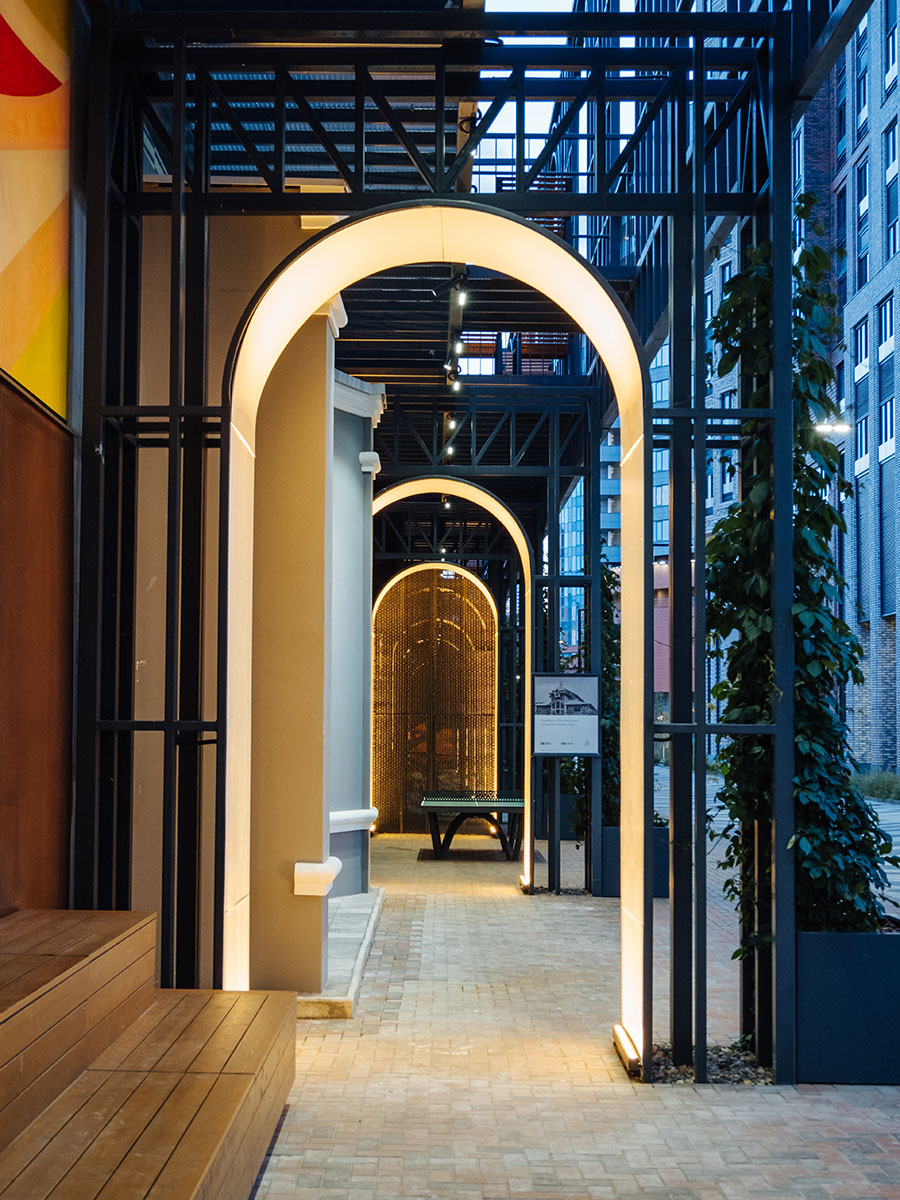 The dynamics of the children’s figures in the mosaic panels is stressed by a work-out zone with some bright graffiti and contrast details of the sports equipment. The preserved wall of the former Young Pioneers stadium was painted by the Raskrasimvse team of graffiti artists. 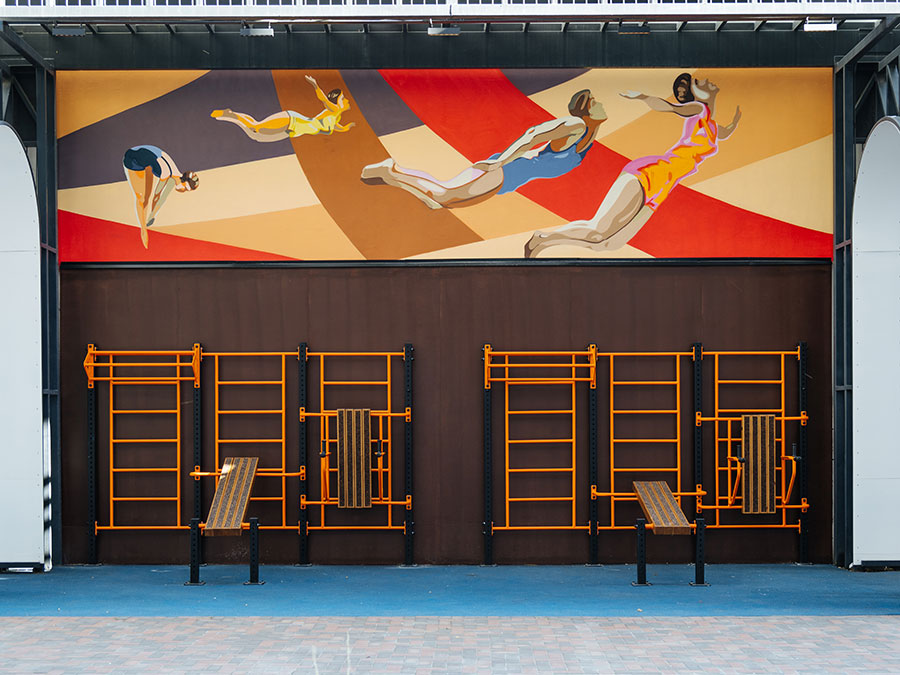 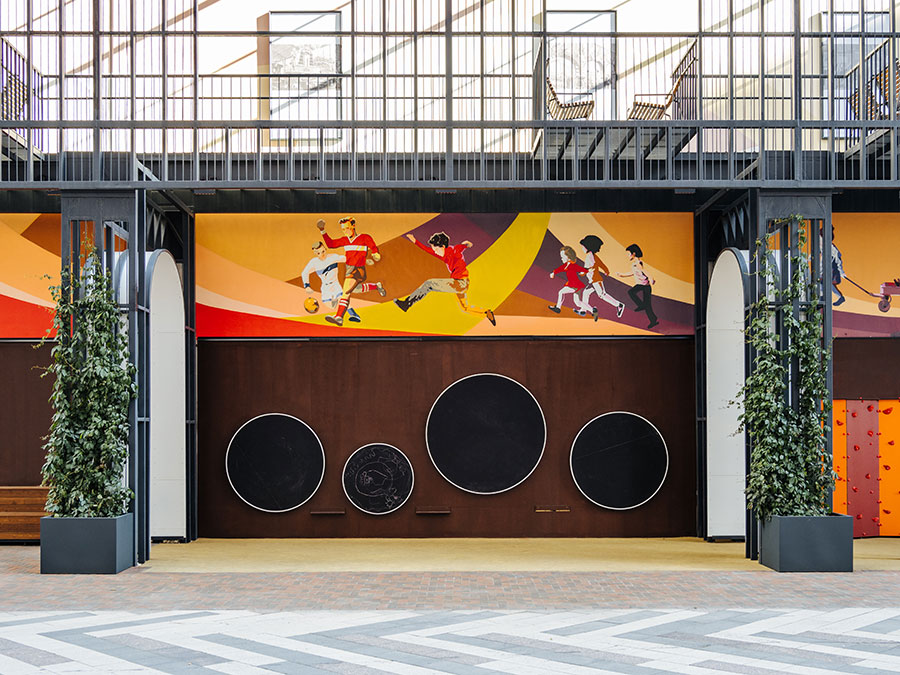 The oasis-yards are allocated exclusively for the complex residents. A special pattern of variously shaped pentagons was created for the yards. Due to such separation of the yards, the space enlarges visually and looks more complex. The planter boxes also shape an ornament. 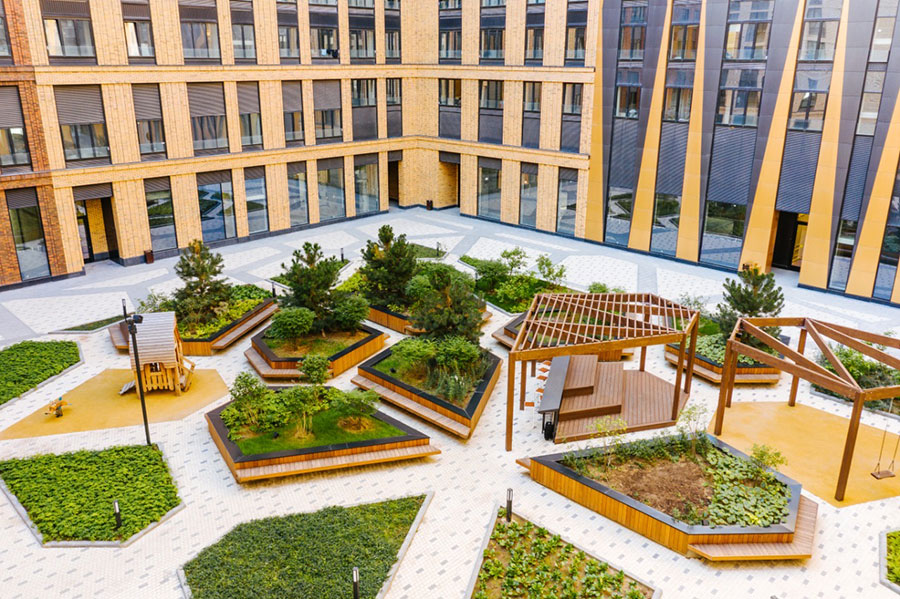 Each yard has a pergola with swings, amphitheatre with a bar stand and a small playground for kids. We were aiming to create an atmosphere of a cozy yard comparable in size with the people in it. 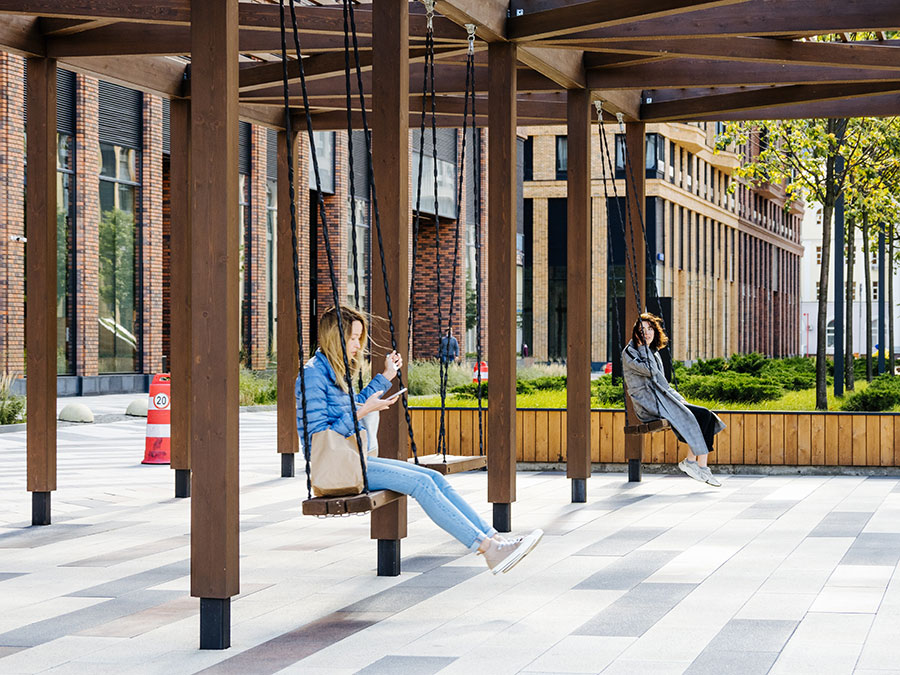 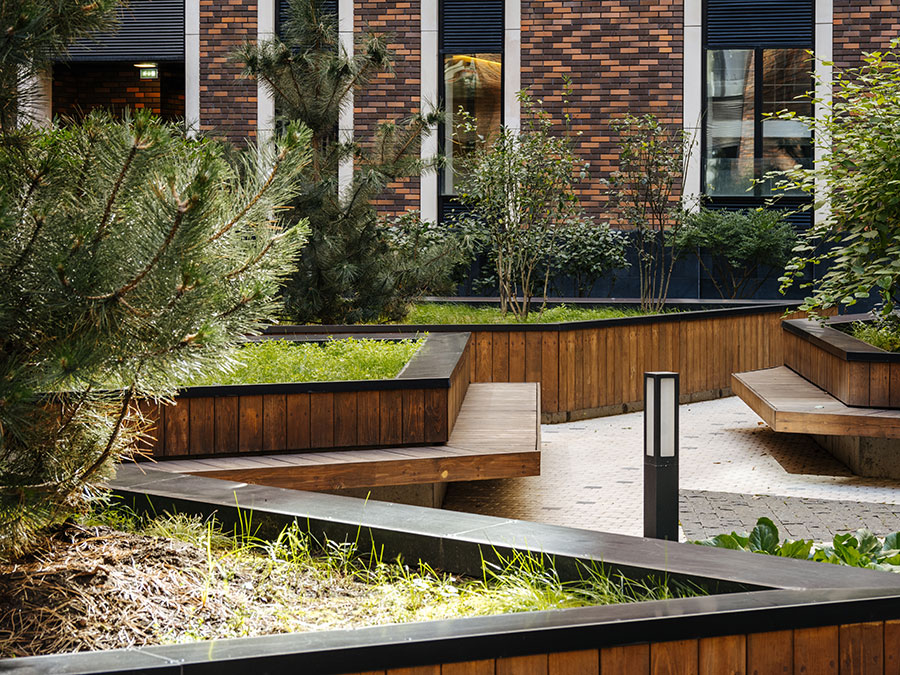 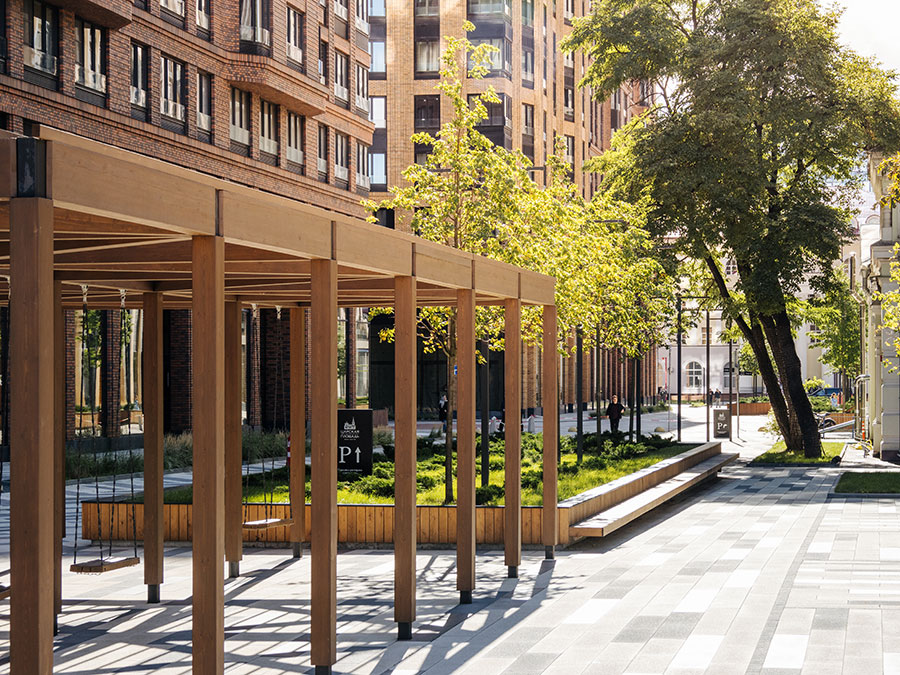 The territory now also enjoys a kids’ zone with geoplastic and a sports zone protected from the driveway area by the hills with bushes and trees. These sites are available not only to the complex residents but also to the residents of the neighbouring houses. 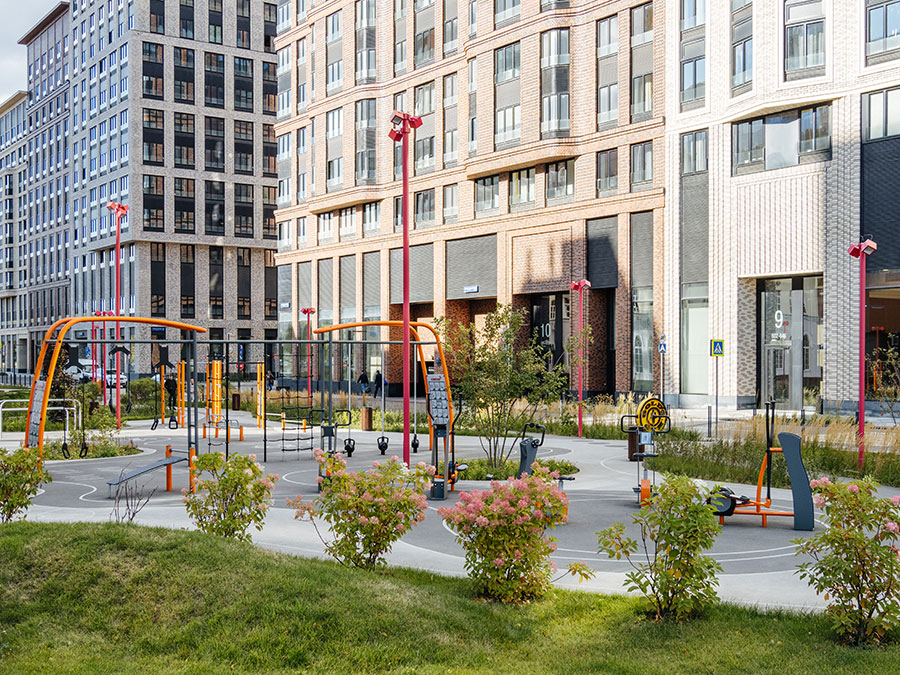 The relief of the site as well as the pattern of the pavement shape a unique and an eye-catching image of the space. These areas are split into zones by the landscaping, which in addition to the unusual location of the equipment lets you make up your own scenarios of using these spaces for kids and teenagers. 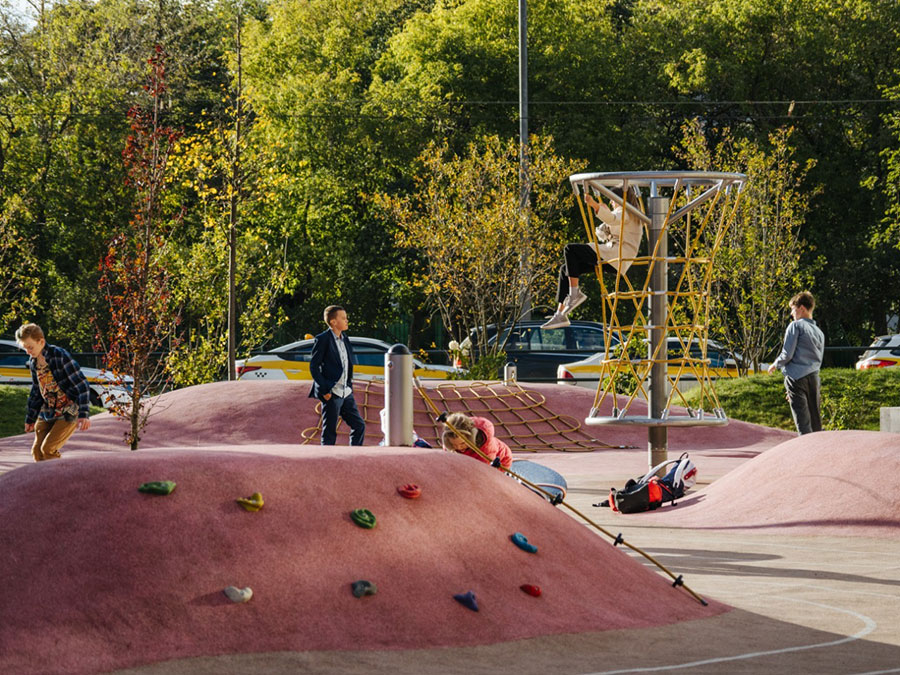