Awards:
Archiwood Award 2018 for Urban Design according to popular vote 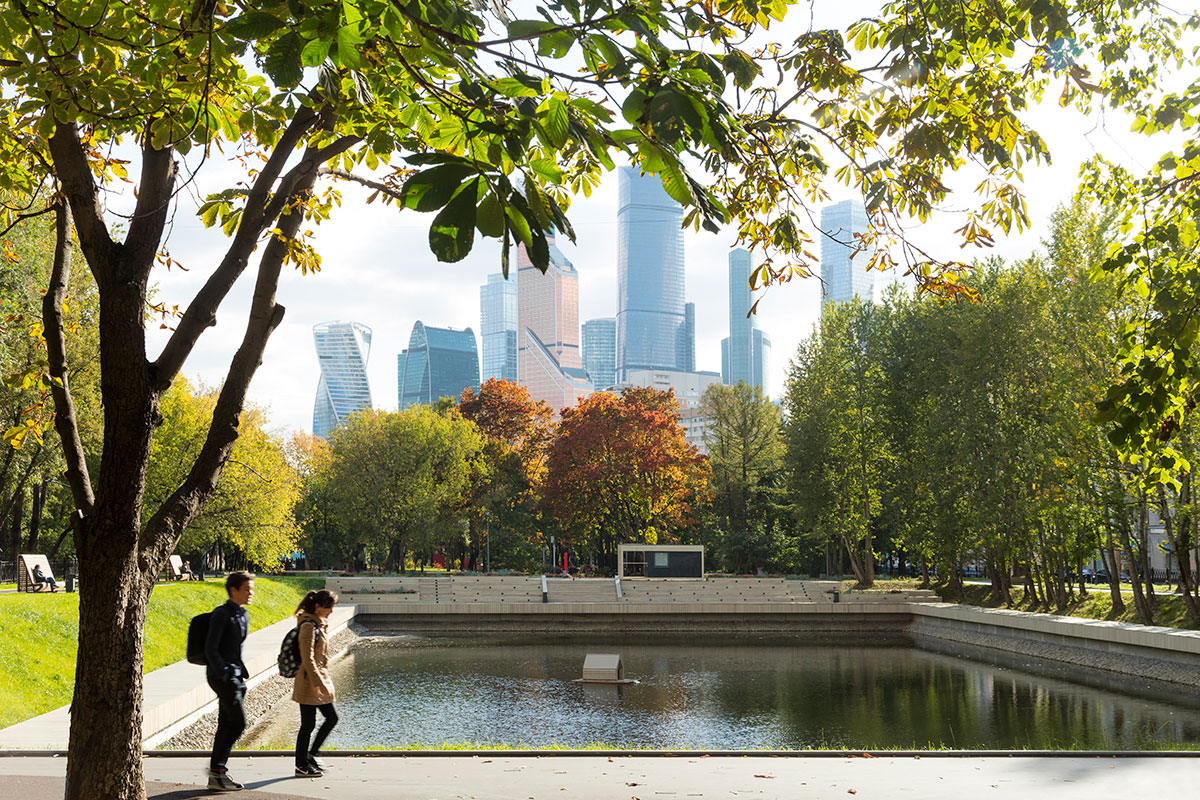 Krasnogvardeisky ponds are a historical continuation of the main territory of the Krasnaya Presnya Park. Merging these two parks into a single system led to an integrated development programme based on a broad social and urban research. Preserving the existing structure and landscape of the Krasnogvardeisky ponds parks as much as possible, required for a comfortable family type and active recreation space to be created.

KB23 conducted a sociological research which formed the basis for the concept. The research made it possible to accurately balance the recreational functions and format based on feedback by the residents of nearby buildings as the site is first and foremost perceived as a secluded inner courtyard. By preserving the existing structure of the park and complementing it with new infrastructure and recreational format it was possible to emphasize the individual character of the recreational zone and increase the quality of urban and architectural design as well as comfort and safety. 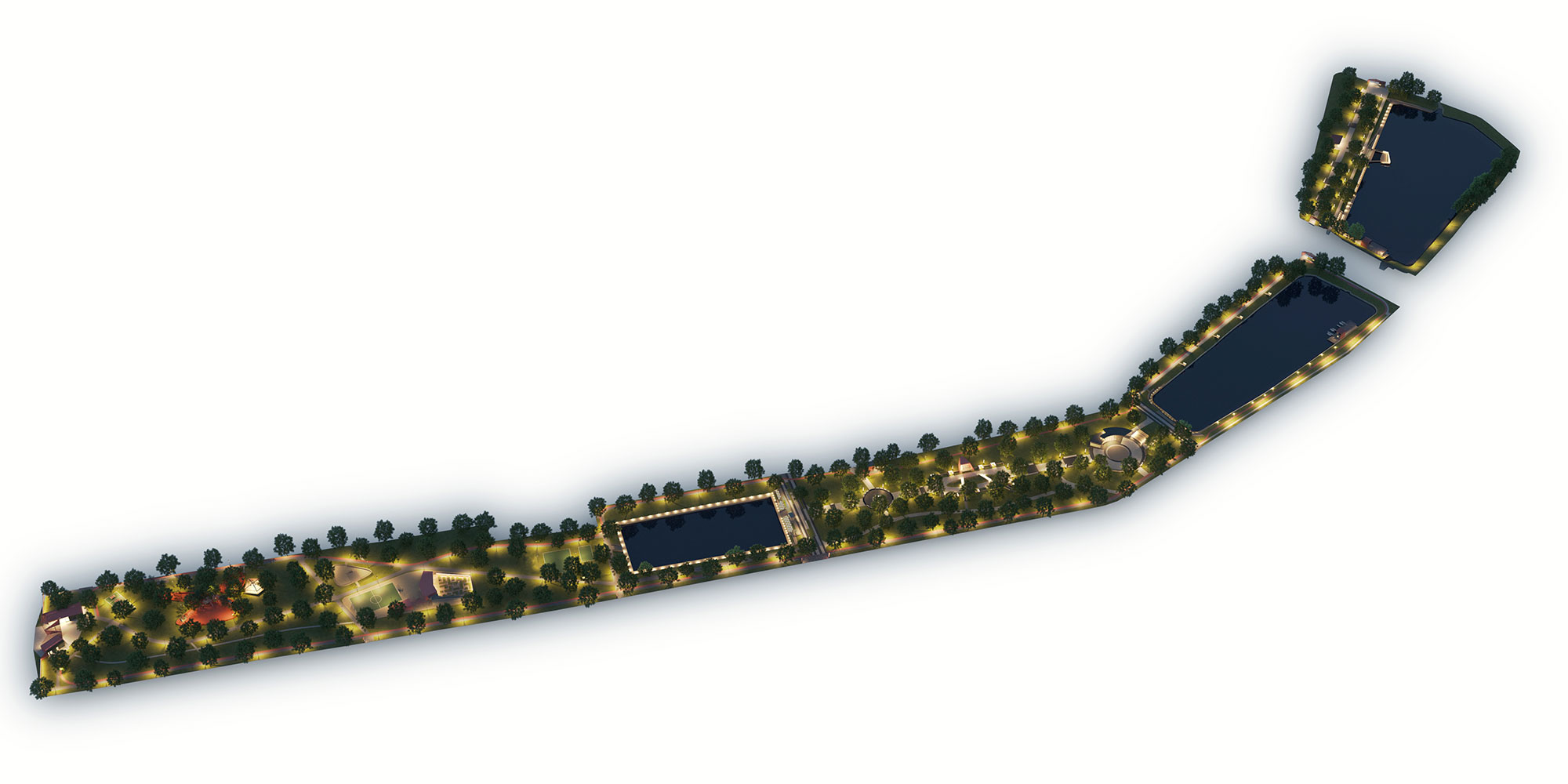 The territory of the Krasnogvardeisky ponds is stretched from the Zvenigotodsky highway on the north to the 1st Krasnogvardeisky driveway on the south and includes a cascade of three interconnected ponds. The ponds were formed back in the early XVIII century as a part of the princes Gagarin Studenets estate park ensemble. The territory acquired its present form in the late 50s of the XX century during the development of the boulevard.
Wowhaus created a development project for the Krasnogvardeisky ponds territory and their natural integration with the Krasnaya Presnya Park using a general navigation, design identity, design codes for new objects and infrastructure.
All objects incorporate a common design of soaring structures with lightweight grid elements, the colour scheme is also unified and consists of red, anthracite-coloured and the colour of natural wood. Particular attention was paid to the additional landscaping of the territory. Perennial plants were added to the existing fabric of greenery designed to emphasize the natural beauty of the Krasnogvardeisky ponds and also create a missing middle tier consisting of various shrubs and plants specially selected for this area.
Following the historical structure of the park and the overall design, the proximity of residential buildings and important urban elements the site can be divided into five fragments each of which has its own character and is designed taking into account a specific dominant function. At the same time, the holistic perception of all the elements is preserved thanks to the general design of objects and greenery.

Fragment 1 - from the Zvenigorodsky highway to the upper pond a 'family sports and educational park' is located.
The structure of this part of the park is the most 'wild' and has a forest-like feel. The task of the project was to preserve this feeling of a 'natural' character of the space by including the necessary areas and objects. The plants for this fragment are selected given the natural character of the greenery. 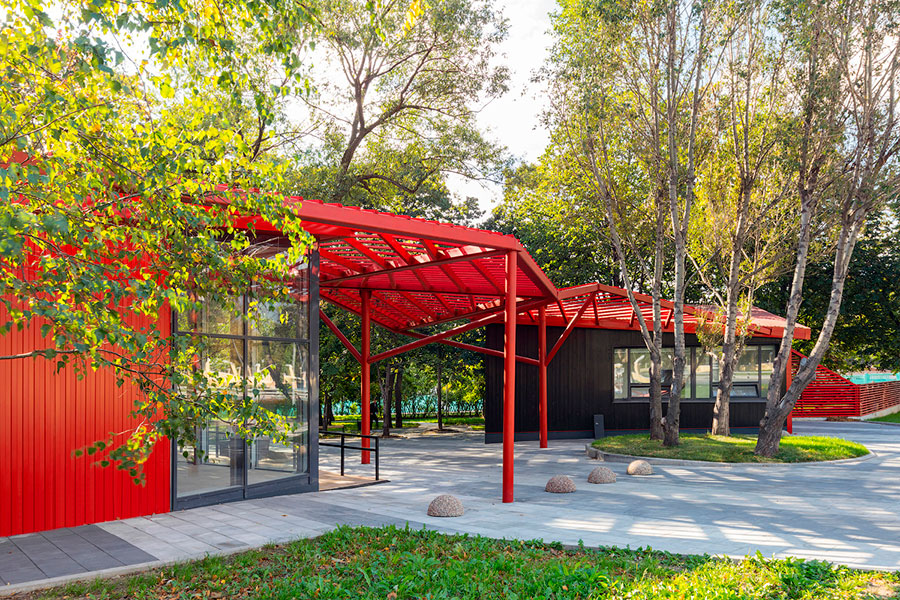 Special attention in this fragment was paid to the entrance zone from the side of Zvenigorodsky highway. It was important to focus the attention on the park and its new design, therefore, the architects designed an entrance group complex integrated into the new fencing of the territory and consisting of two pavilions with a light structural pergola. 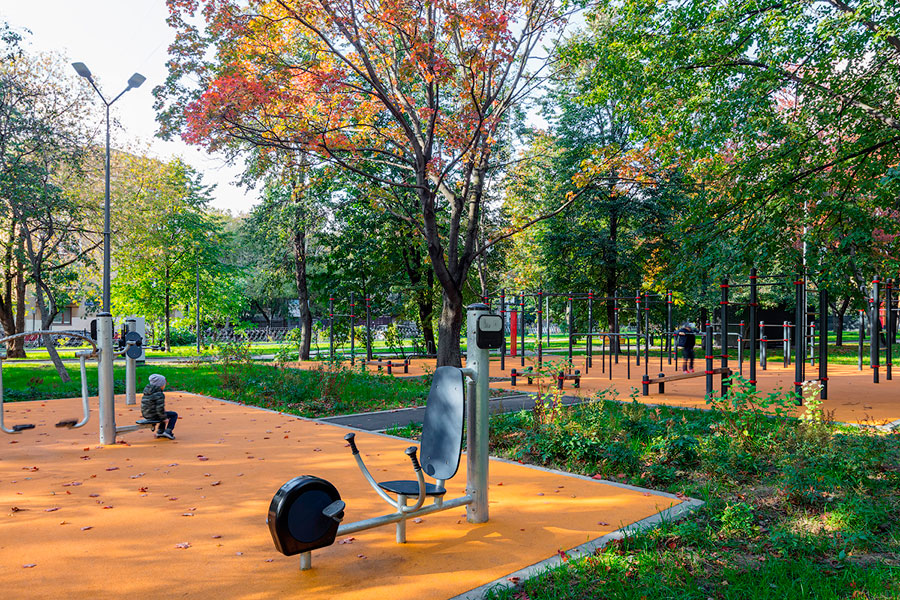 The concept of this part of the Krasnogvardeisky ponds is also based around the idea of a 'secret garden' - a walking route with objects and observation platforms situated along it. Street exercise equipment, workout areas, table tennis, a yoga pavilion, and also an original children's playground with treehouses and high-rope courses are located here. 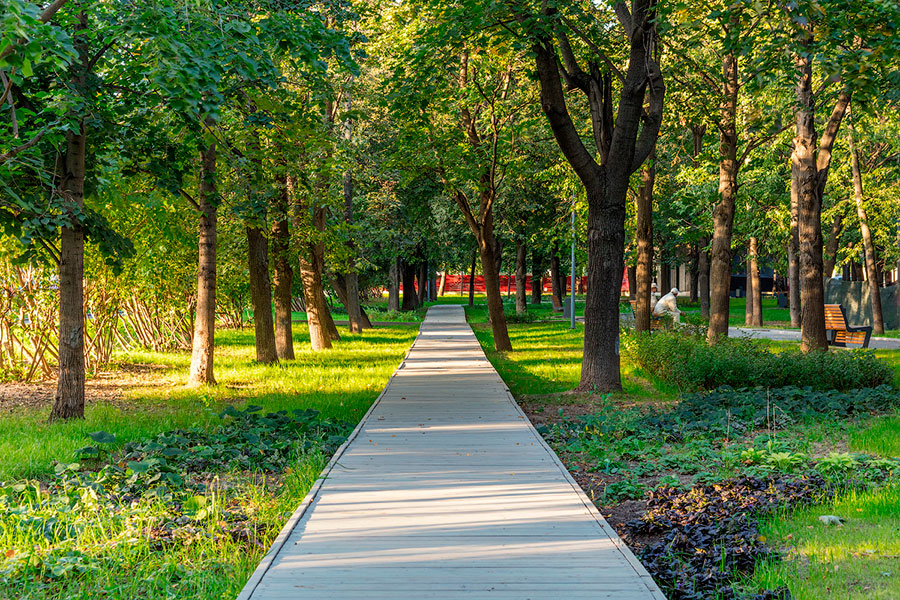 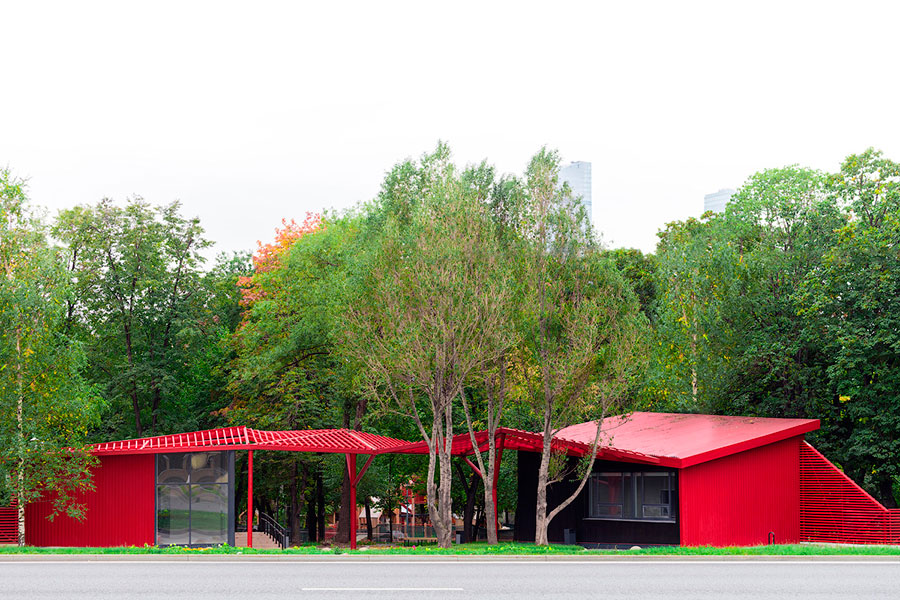 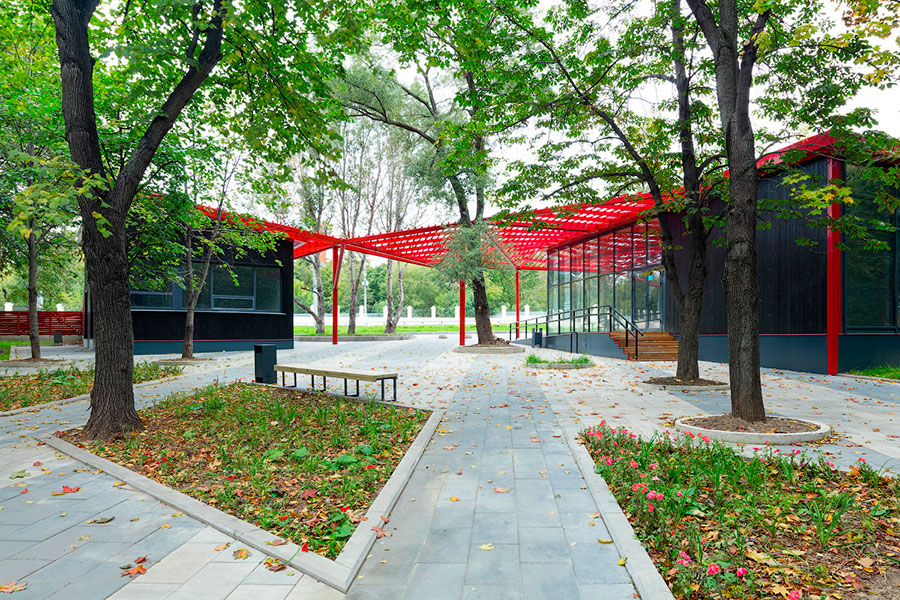 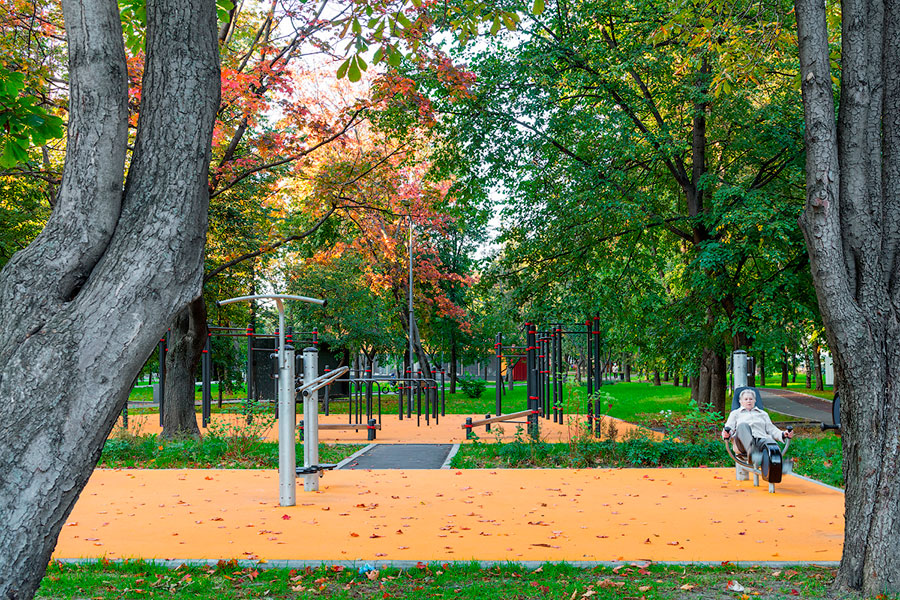 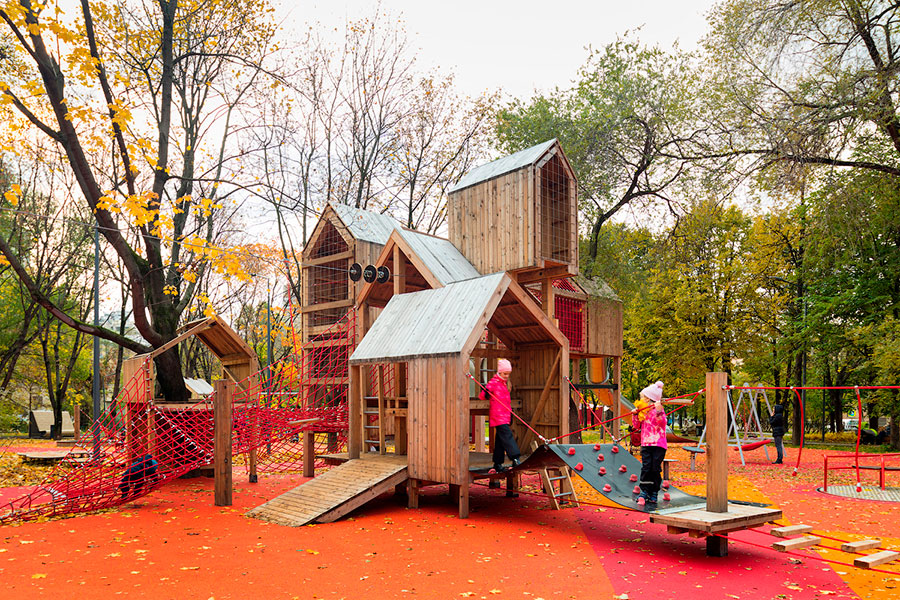 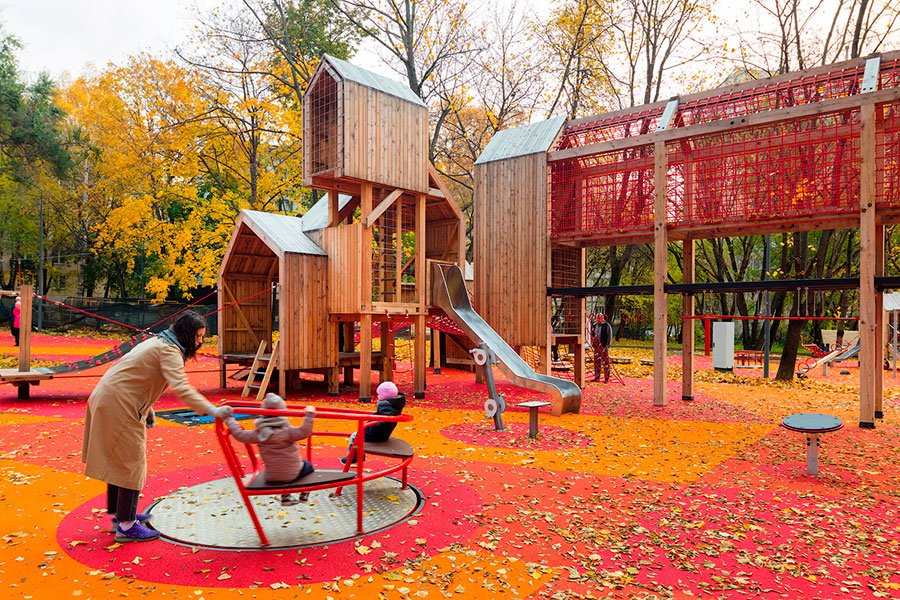 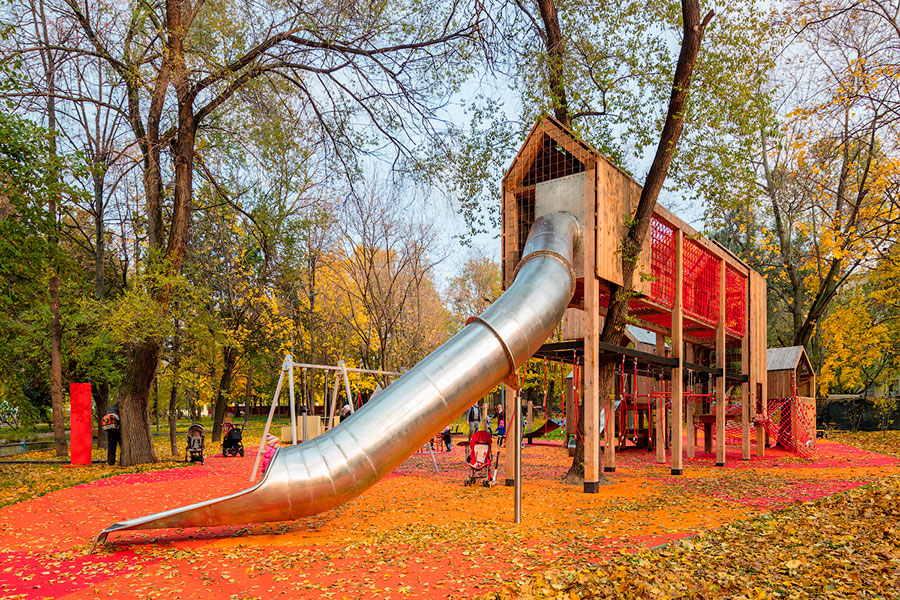 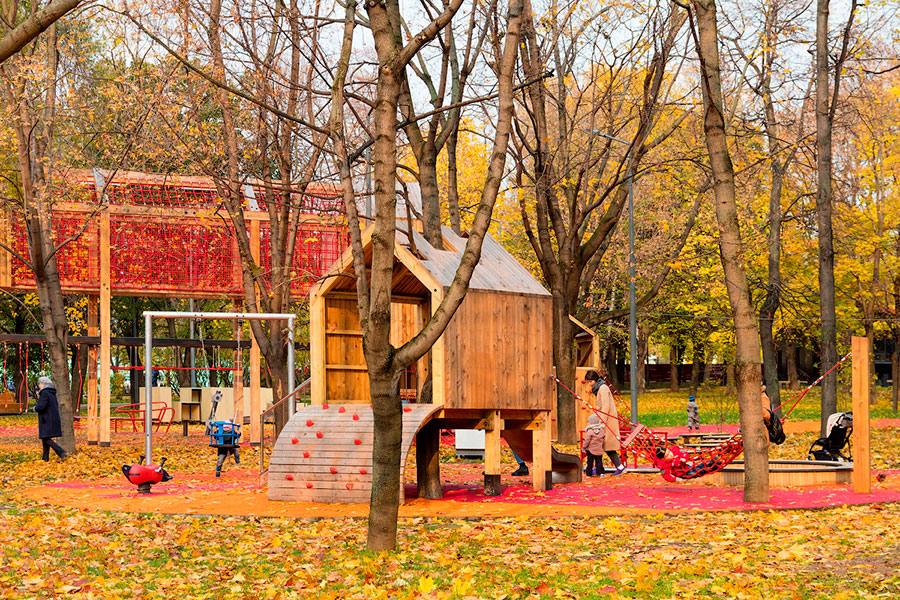 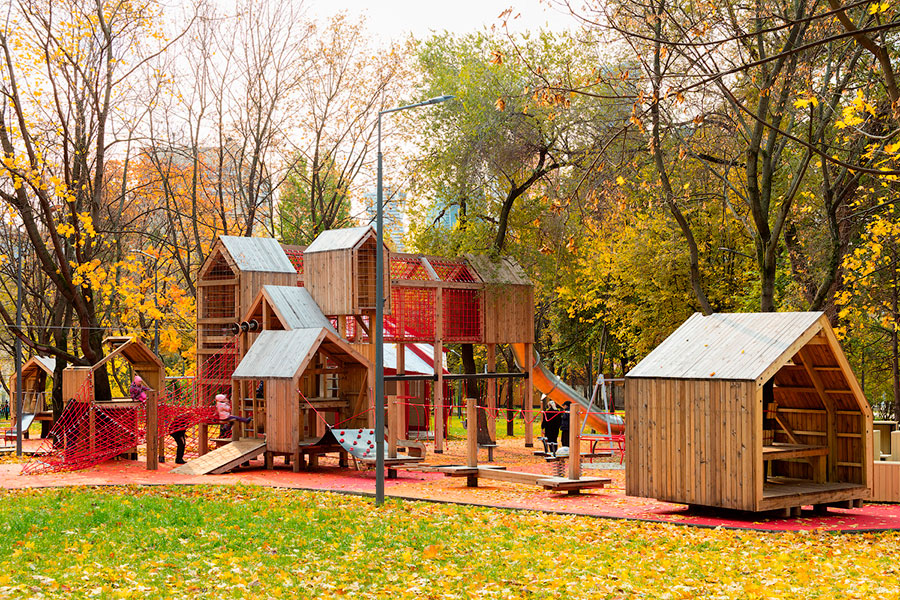 Fragment 2 - upper pond - 'wild' or contemplative pond. A multi-level deck with planters was created on the pond bank, and duck houses were installed on the water. 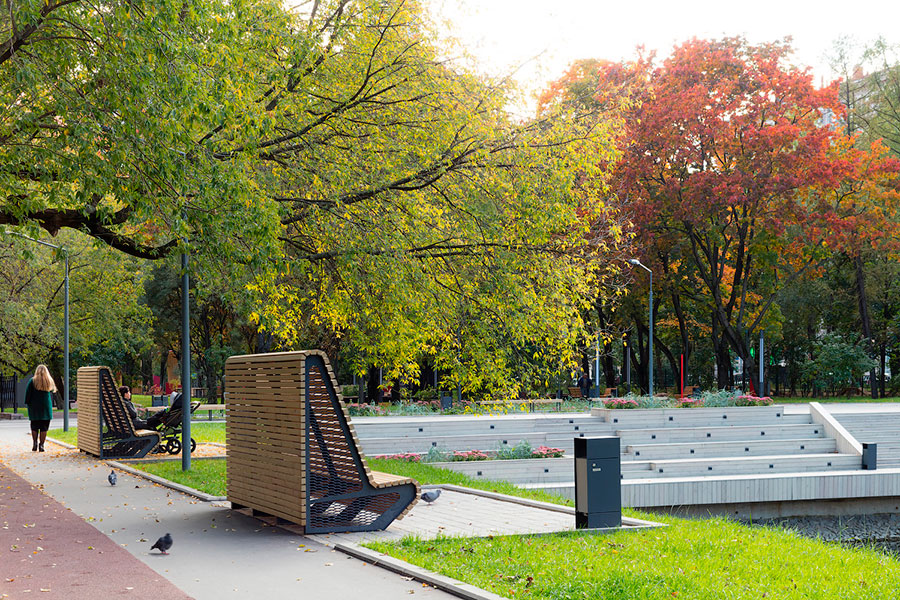 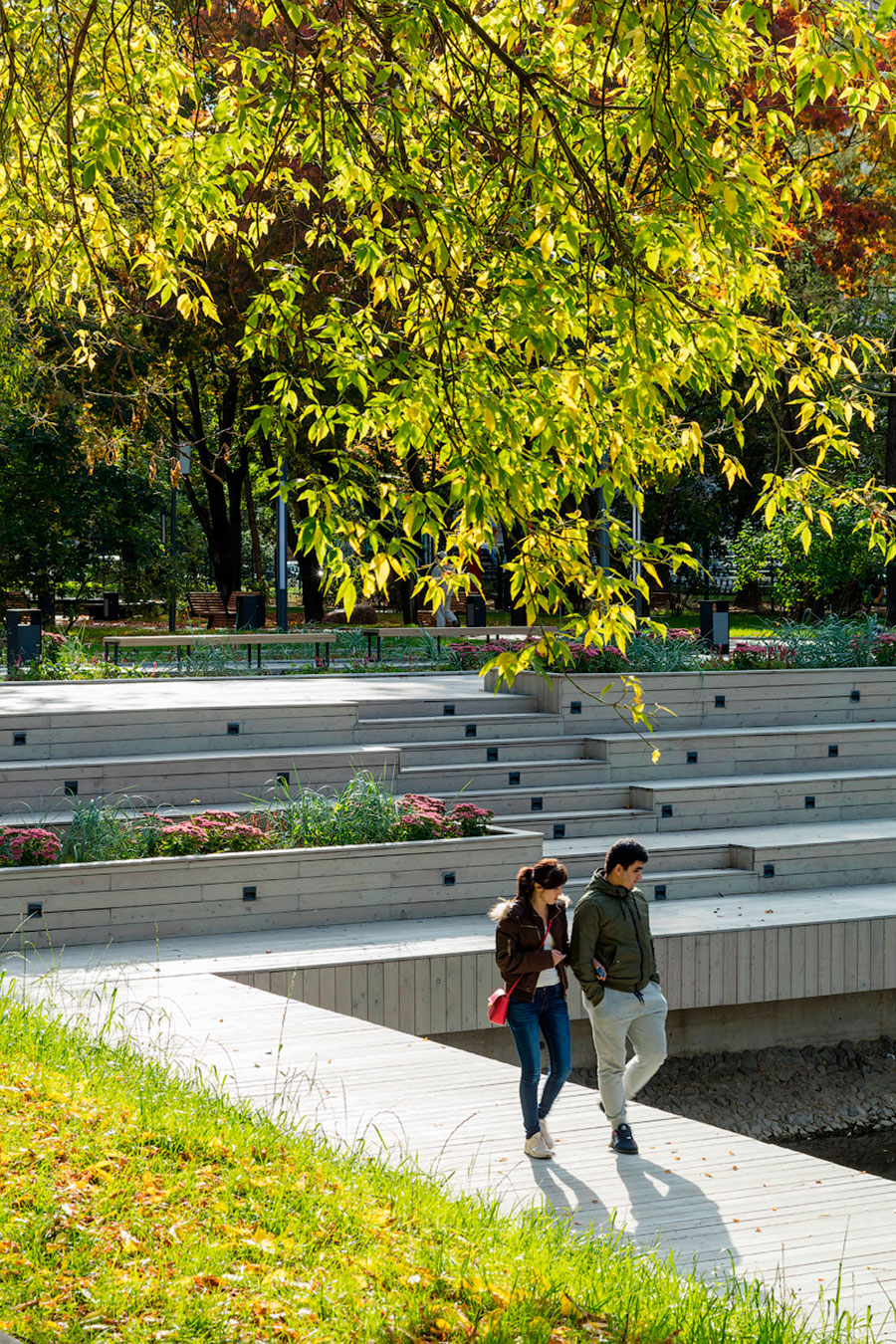 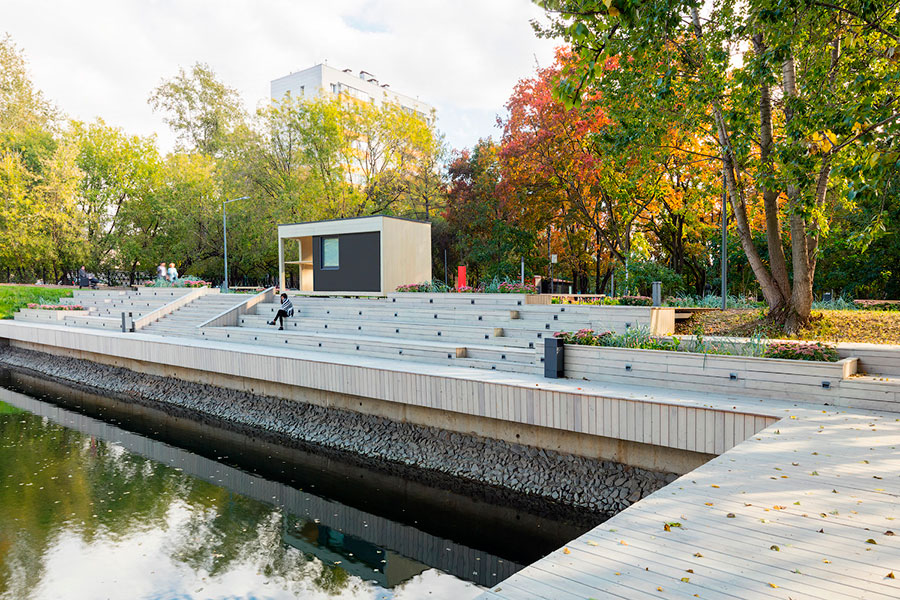 Fragment 3 - from the upper pond to the middle pond - the central part situated between the ponds carries the traditional design of classical regular parks. Various-shaped platforms with chess pavilions are situated on the axis of the central alley and are organically integrated into the landscape among the flower beds with benches situated on the sides. The historical structure of the path and route network is preserved. The existing local landmark - a monument to October Days which bears a strong significance for all the residents of the neighbourhood is relocated to a platform which best matches its scale and sits closer to the upper pond. A small cafe with an amphitheatre and a dance floor will be built in its place. 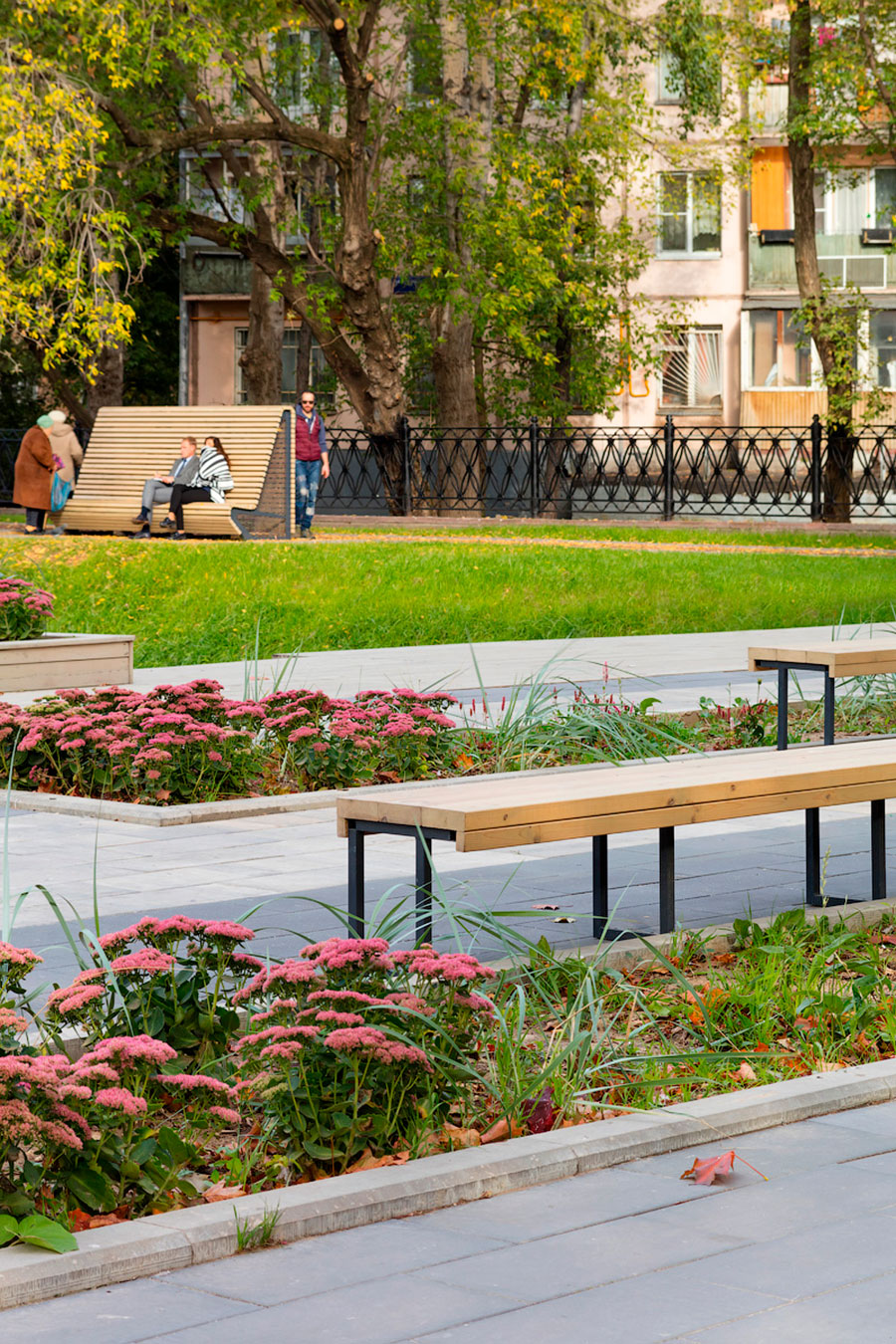 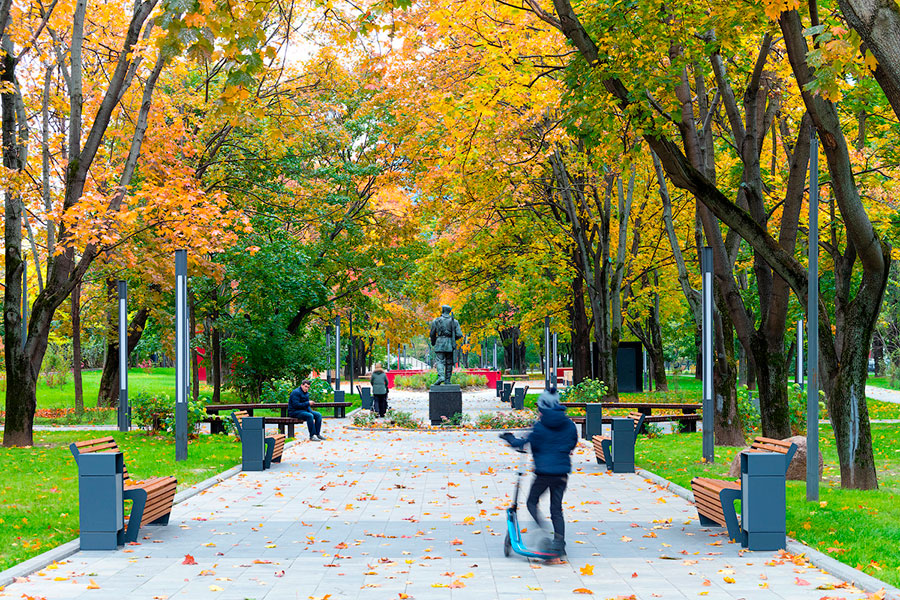 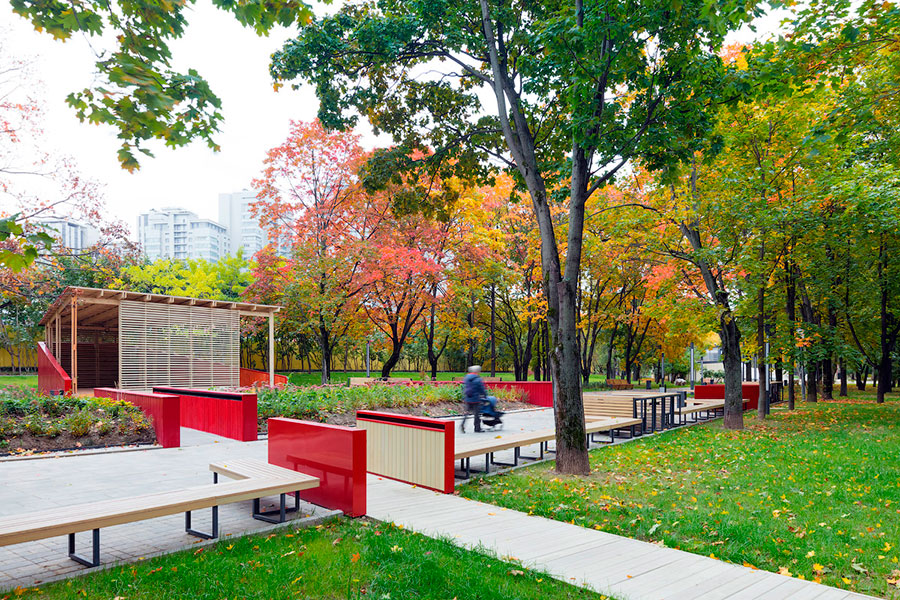 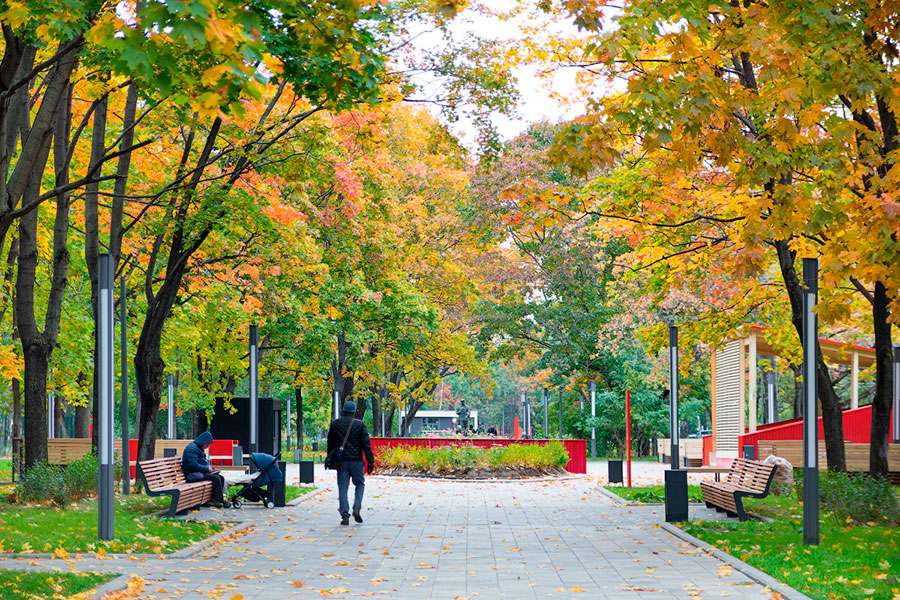 Fragment 4 (middle pond) - 'romantic pond'. A logical continuation of the promenade zone with the gazebos above water, the deck and the decorative sphere-shaped lighting along the slopes of the pond and the water surface. 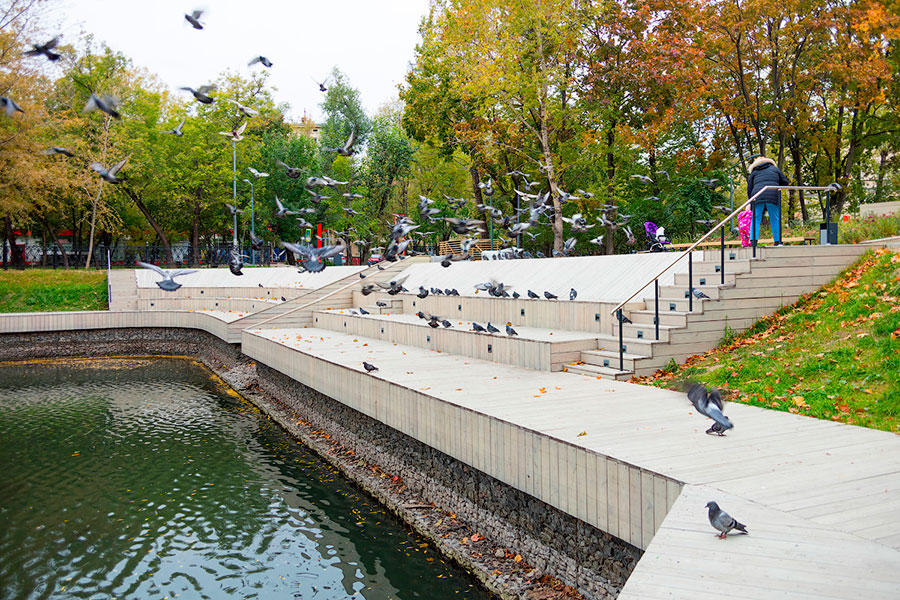 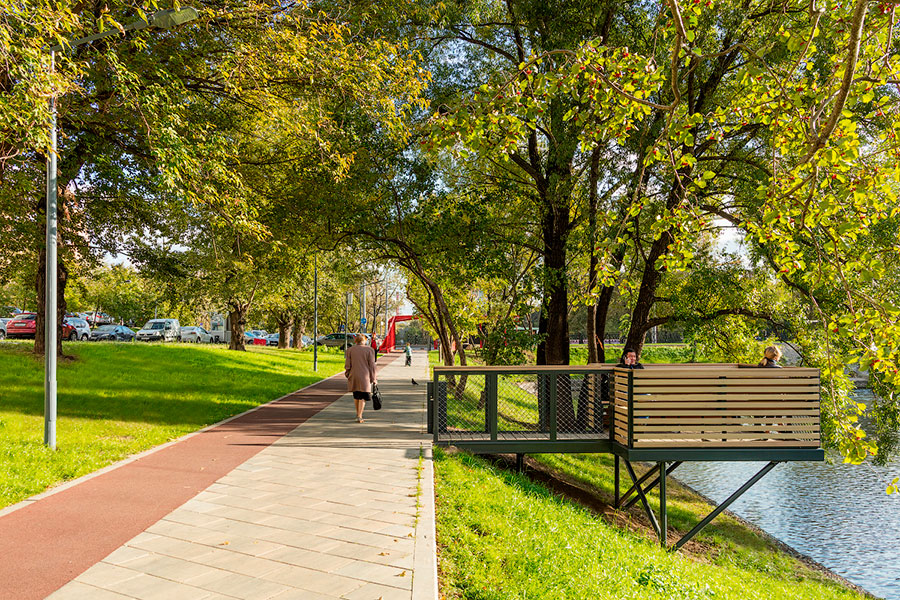 Fragment 5 incorporates the lower pond and is situated on the other side of the Shmitovsky driveway which somewhat complicates its integration into the general ensemble. We proposed to turn the disadvantage into an advantage and centre all the loud sports and entertainment functions here, on a site which is situated at a maximum distance from residential buildings. In addition to the paddle-boat rental and a small cafe, a floating stage will be built right above the pond for summer concerts and festivals with an amphitheatre for 150 seats situated opposite - the visiting card of the park. The nearby bank is equipped with a big sun-bed deck. 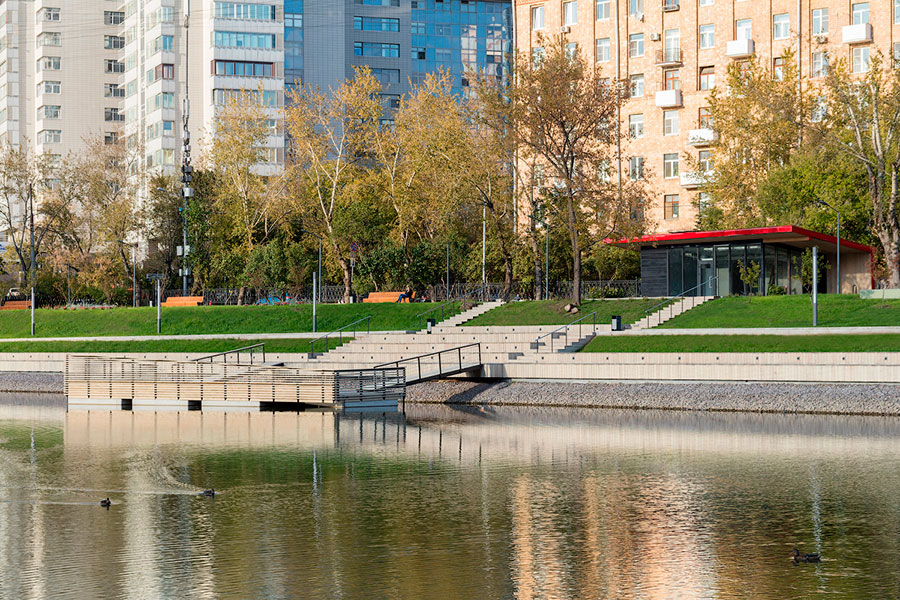 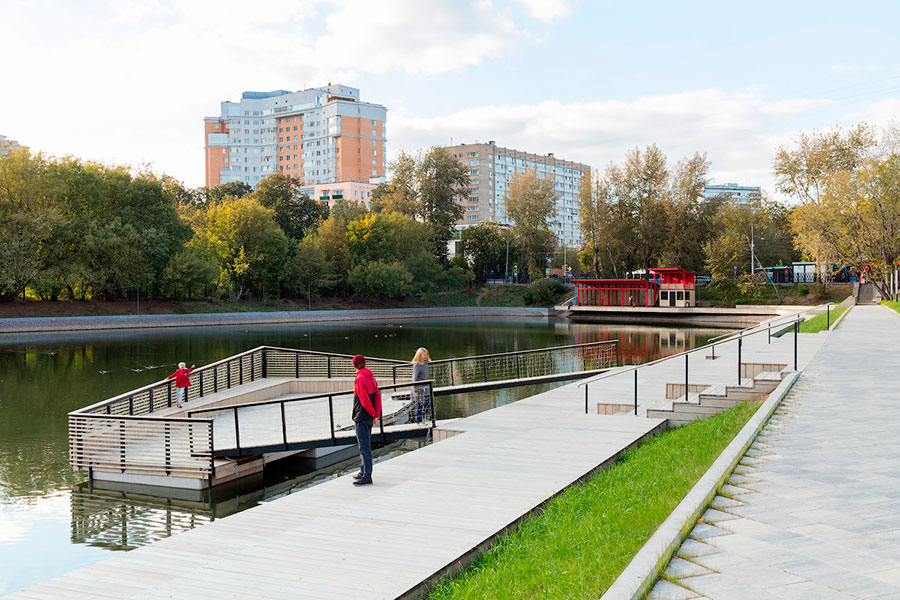 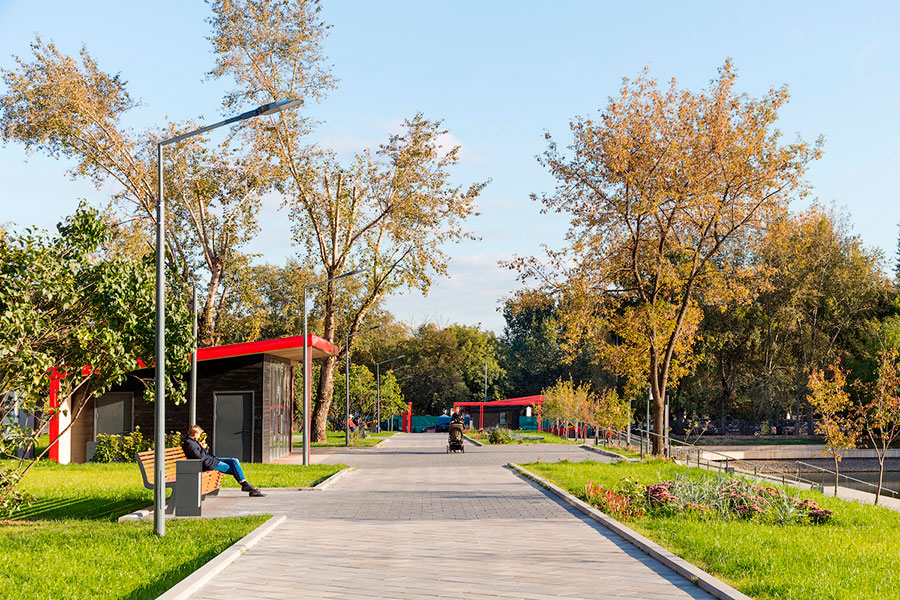 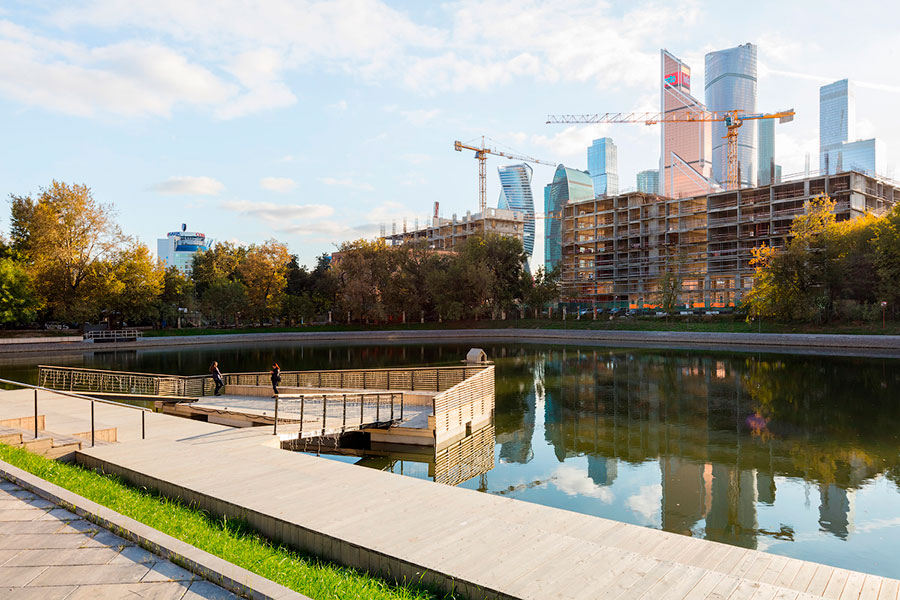 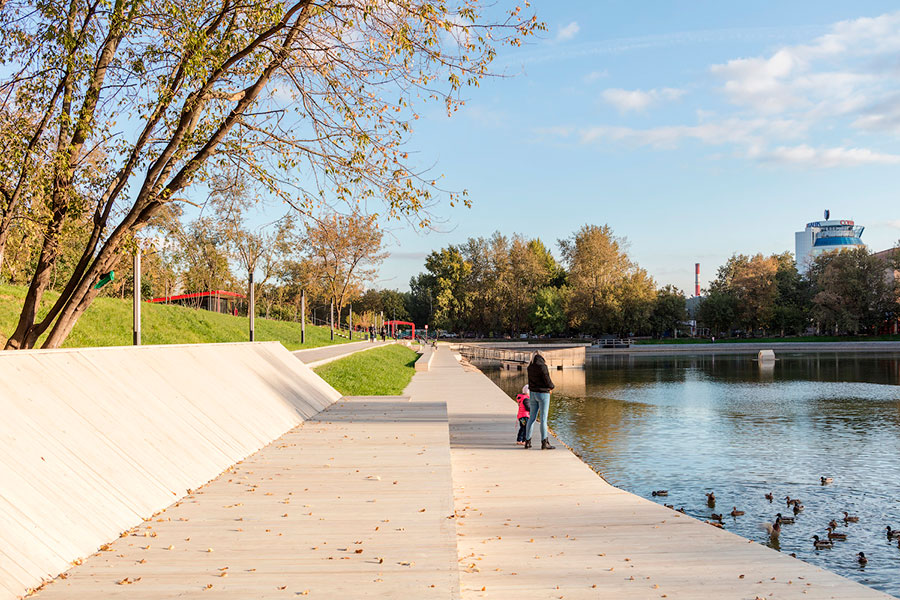